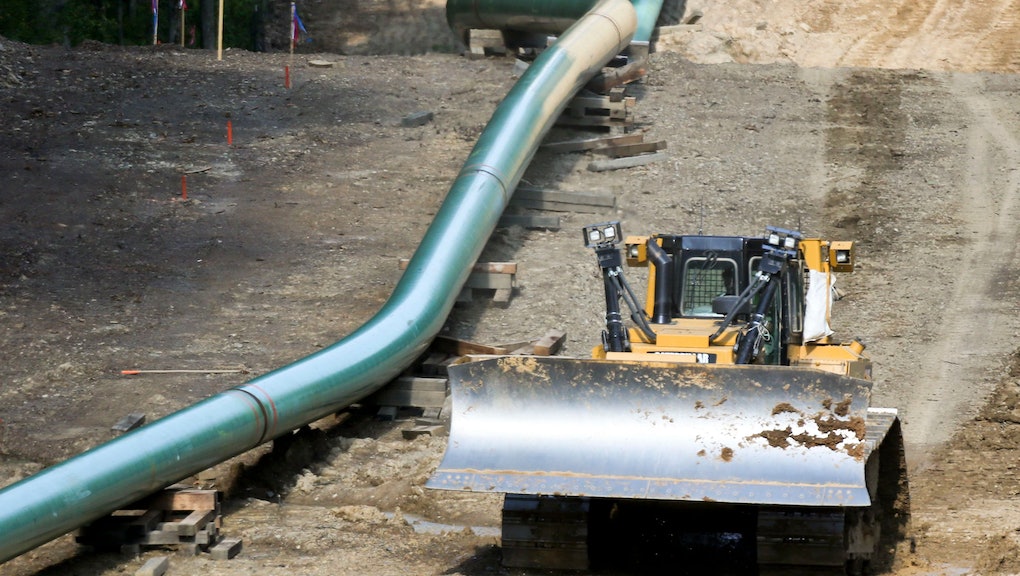 When things like highways and pipelines are built, they don't exist in a vacuum — they take over land that may have otherwise been used or occupied by any number of flora and fauna. These human-made pieces of infrastructure may be essential to our lives, but they also can have adverse effects on other creatures and the planet itself. Unfortunately, President Trump and his cohorts don't appear particularly interested in that. According to the New York Times, a new rule proposed by the Trump administration would allow for ignoring potential environmental damage — including contributions to climate change — that federal agencies' major infrastructure projects would have.

If Trump has his way, projects like the Keystone XL oil pipeline and other major fossil fuel projects will no longer be required to take into account potential environmental impacts prior to construction. Additionally, the administration intends to narrow the types of projects that even require an environmental review before going forward. That would allow federal agencies to skip vital steps of the construction process, including disclosing plans for waste disposal, if the project will cause any harm or disruption to surrounding ecosystems or if construction may contribute to air or water pollution.

The proposed changes would effectively upend the National Environmental Policy Act (NEPA), a 50-year-old standard signed into law by President Richard Nixon that established the need to take environmental factors into consideration when undertaking large construction projects. The law is relatively simple but had a major impact on how the federal government went about building infrastructure. Prior to the passing of the NEPA, agencies operated on a mission directive only, so building a highway simply meant finding the shortest distances and ignoring what land may be torn up in the process. Once the law was put into place, federal agencies were given an additional directive: to recognize our roles as trustees for the generations that will succeed us and work to the best of our ability to preserve the environment for them.

The NEPA is one of those laws that Republicans and the Trump White House look at with ire, viewing it as little more than red tape that gets in the way of job-creating projects. The fact of the matter, though, is quite the opposite. First, the NEPA was created to protect the type of people that Trump claims to speak for: the so-called forgotten man and woman, living in the middle of the country that is largely ignored by the "coastal elites." The law was passed in part because of concerns expressed by rural communities, farmers, and indigenous people who felt their land and property was being put at risk by the construction of the Interstate Highway System, which rarely took into account their needs. During the initial planning and building phases of those essential roadways designed to connect the country, the government unceremoniously bulldozed its way through communities and ecosystems with no regard for the effects of those actions. This led to revolts and protests from citizens, who demanded input in the process and new care for environmental factors.

Instead of allowing the government to act unilaterally — completing construction at the expense of people, plants, and animals that have already taken root in the area — the NEPA requires federal agencies to take environmental impact statements for any proposed infrastructure project (save for emergency situations and some executive actions). These impact statements take into account any potential impact a project may have on the surrounding communities and environment, and are made available to the public. When an initial impact statement is published, members of the public — including scientists and other experts — are encouraged to comment on the findings and offer potential solutions to environmental concerns. When the government releases its finalized version of the environmental impact statement, it is required by the NEPA to address reasonable input from members of the community and explain why the agency has decided to accept or reject expert views prior to construction.

To say that the NEPA has been a success would be an understatement. The Natural Resources Defense Council (NRDC) compiled an exhaustive list of victories won through the law in nearly every state in the nation, including examples that saved taxpayers millions of dollars and created jobs. The NEPA is a tool for government accountability and for providing local communities with a voice, allowing them to express when a federal project would actually hurt the local economy and ecosystem in a ways that might not be taken into account. This is something that conservatives, who typically tout the belief that the federal government should be limited in its powers and law making should be made at the local level, should applaud as it erodes what would be otherwise unchecked federal power. It would also stand to reason that a political ideology with "conserve" in its name may want to conserve land and communities — but apparently not.

That has not been the case under the Trump administration, which has gone past simply denying the existence of climate change to actively contributing to it at every opportunity. The New York Times has tracked 95 rollbacks of environmental protections during the Trump administration's reign, ranging from entirely upending the Endangered Species Act to stripping away regulations for coal plants to allow them to pollute more. Trump operates with a complete misunderstanding of the environment and how humans affect it, so it is perhaps not a surprise to see his administration act on those beliefs by stripping away environmental protections — but these decisions will almost certainly carry a negative effect on the health of Americans and the planet as a whole. An essay published in the Journal of the American Medical Association in 2018 estimated that Trump's policies could potentially result in 80,000 additional deaths per decade, and we've already seen a decline in air quality since Trump took office.

The proposal to eliminate parts of the NEPA should not simply be viewed as anti-environment or anti-climate change — it should be viewed as anti-conservative. By rolling back essential parts of the law that provide voice to otherwise underserved and underheard communities, the Trump administration would reveal who it truly works for: not the forgotten man and woman, who would once again be silenced without the NEPA available to provide voice against potentially invasive and harmful projects, but rather the fossil fuel industry that is more concerned with making a profit than protecting communities and ecosystems. Trump and his cohorts — many of whom are former oil and coal executives and lobbyists — have made it clear that their goal is not to conserve anything but the bottom line for fossil fuel companies.

More like this
Amid daily reports of catastrophe, Americans are finally starting to realize climate change is bad
By AJ Dellinger
Plastic Free July is the perfect opportunity to kick our pandemic habits
By AJ Dellinger
Bernie Sanders simply does not care about your archaic Senate rules
By AJ Dellinger
Stay up to date