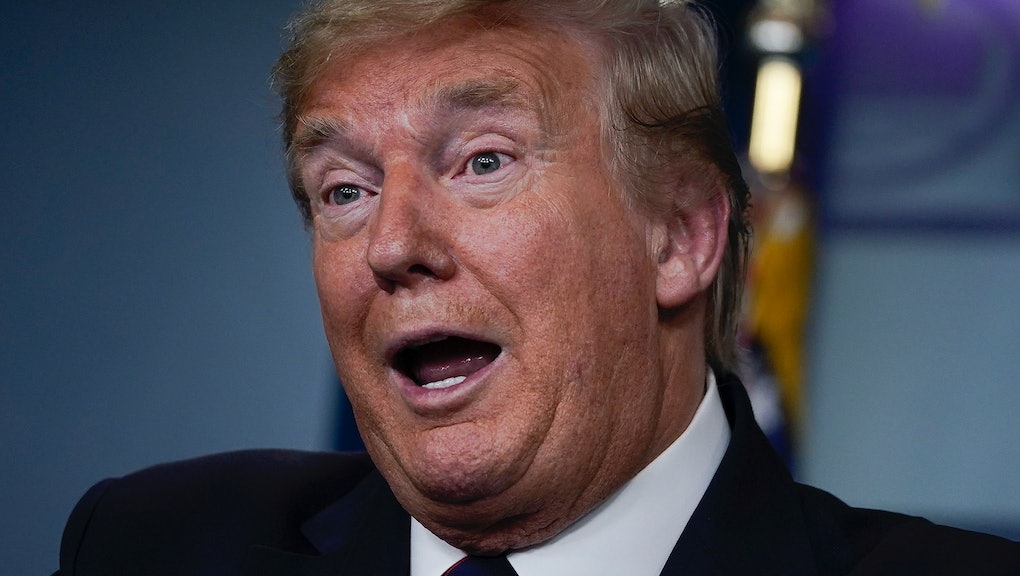 Questions surrounding President Donald Trump's neurological condition have, of late, bubbled to the surface of our poisoned national discourse again: Can he walk down a ramp? Can he drink a glass of water? Why does he keep slurring his speech?

The issue of whether or not Trump has a hidden neurological disorder — a legitimate question not without precedent, if it means he might be incapable of discharging his duties as president — seems to have irked Trump to the point that he felt the need to once again brag about his infamously "very good" brain during a typically sycophantic interview with Fox News's Sean Hannity on Thursday evening.

Here's the transcript, courtesy of Fox News itself. See if you can guess which part made me laugh out loud.

[Biden] hasn't taken any cognitive test, because he couldn't pass one. I actually took one when I -- very recently, when I -- when I was -- the radical left were saying, is he all there? Is he all there? And I proved I was all there, because I got -- I aced it. I aced the test. And he should take the same exact test, a very standard test. I took it at Walter Reed Medical Center in front of doctors. And they were very surprised. They said, that's an unbelievable thing. Rarely does anybody do what you just did. But he should take that same test.

Let's simplify this a bit. Unpack it from it's characteristically indecipherable Trump-ese. Here, the president is bragging that he took a cognitive test— why, and what prompted the assessment, he doesn't say — and, upon passing, insists that the doctors were "very surprised."

The doctors gave him a "very standard" cognitive test

The doctors were "very surprised" he passed the "very standard" cognitive test.

The doctors said "that's an unbelievable thing" when he passed a "very standard" cognitive test.

Personally, if rumors were swirling about my mental fitness to execute the responsibilities inherent in the most difficult job on Earth, I would simply not go on television and blab that a panel of doctors could barely believe that I'd cleared a basic assessment of mental acuity.

But hey, that's just me.

More like this
Donald Trump is EXTREMELY not into coups, so don't even ask!!!
By Rafi Schwartz
The Trump/O'Reilly fashapalooza is putting up some sad ticket sales numbers
By Rafi Schwartz
In a rare moment of honesty, Trump admits he "became worse" after impeachment
By Rafi Schwartz
Stay up to date