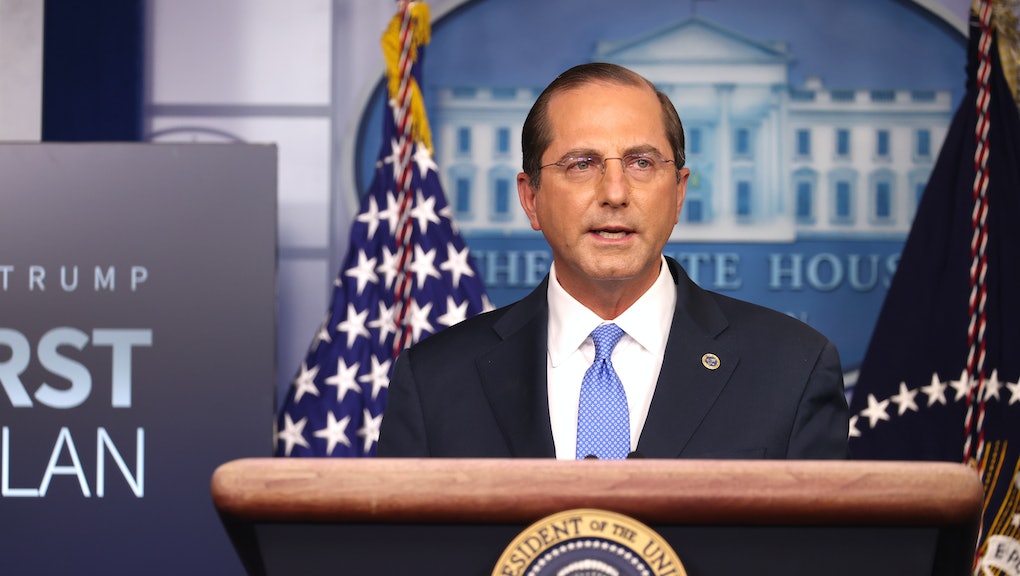 From the beginning, the Trump administration's handling of the coronavirus pandemic has been lacking. But as cases climb nationwide, the United States is on the verge of approving a vaccine. In a rare, but crucial, acknowledgement of reality from a Trump official, Health and Human Services Secretary Alex Azar said he's met with the Biden transition team and 20 million Americans could receive vaccinations in "the next several weeks."

Earlier this month, the United Kingdom became the first country to approve U.S.-based Pfizer and its German partner BioNTech's vaccine. It has already begun to roll out vaccines. However, the U.S. isn't too far behind, with an advisory committee of the Food and Drug Administration meeting Thursday to determine if it will grant emergency approval to Pfizer. From there, the decision will go to the FDA itself.

Many people are now looking to the vaccine to act as America's savior from the pandemic. However, key to the vaccination process is ensuring that the transition from Trump's administration to President-elect Joe Biden's runs smoothly. So far, that hasn't been happening. But during an interview with Azar, CNN's Alisyn Camerota asked if he planned to meet with California Attorney General Xavier Becerra, who is Biden's pick to lead HHS.

While Azar said the processes for that are up to the Senate, "We will ensure a full, cooperative, professional transition. I have already met with the Biden transition team. We want to make sure they get everything that they need."

He continued: "I want to ensure that any transition is as smooth, as professional as possible, because we are about ensuring the health and wellbeing of the American people and that's what matters to me."

Of course, the president himself has had a different philosophy. Since the election was called for Biden on Nov. 7, President Trump has refused to accept his defeat. Early on, he led a rallying cry for supporters to "stop the count!", Republicans filed a steady steam of lawsuits hoping to meant to overturn the results, and his administration would not begin the transition process. And while Azar now says he's committed to a smooth transition, it's a bitch of a switch from just a few days earlier. While being interviewed on Fox News Sunday, Azar repeatedly referred to Biden as "vice president," prompting moderator Chris Wallace to remind Azar that Biden's title is now president-elect.

Coronavirus cases at the tail-end of Trump's presidency, meanwhile, continue to surge. Two weeks after Thanksgiving, the United States recorded over 3,000 coronavirus deaths in a single day for the first time ever. Per data from John Hopkins University, over 286,000 people have died so far. And with the U.S. averaging over 200,000 new coronavirus cases a day over the past week, there are now more than 15 million confirmed cases overall.

So, with the potential for a vaccine being so close, it is good to see Trump officials finally start to acknowledge Biden's win. However, there are a few lingering issues. First, some of the communities most impacted by the pandemic may not want a vaccine due to lingering medical distrust fostered by the U.S. government's medical abuse. There have yet to be any solid public plans to address that, which means the government is already woefully behind.

In addition, the U.S. may not have enough vaccines to go around to begin with. During his interview, Azar said that the government is in negations with Pfizer regarding how many vaccines it will receive. He said that the government is "very optimistic" that Pfizer will provide additional vaccines, but, "I want the American people to know we will use every power we have under the Defense Production Act to make sure the American people get what they need."