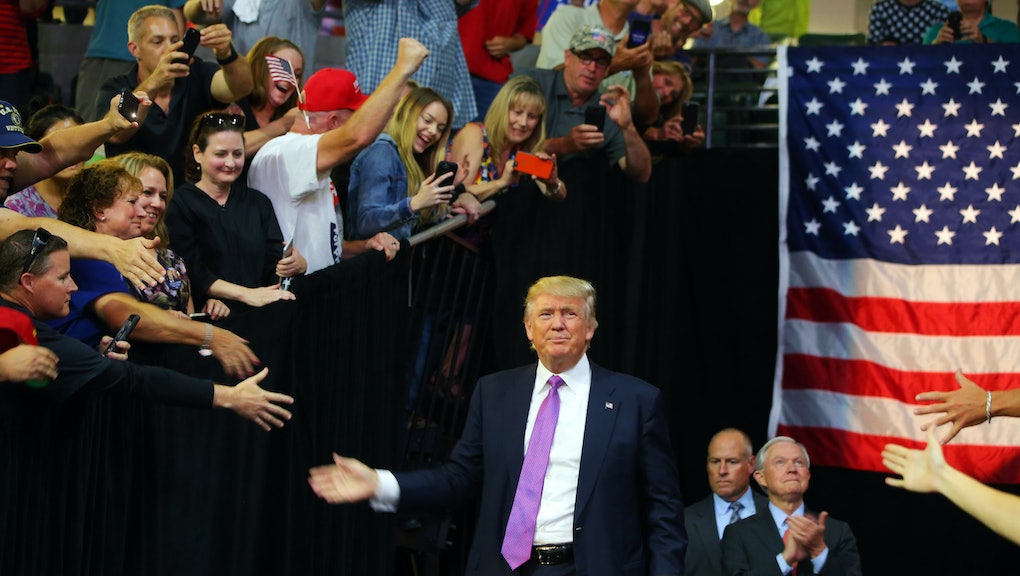 Trump is having his best week since leaving the White House

Remember Donald Trump? Of course you do — he's the guy who capped off four years of bigoted nationalism, medical quackery, and grifty self-enrichment with a full-blown insurrection attempt to keep himself in power for another term. Well, it's been less than four months since he retreated to his private country club in Florida to lick his wounds, air his grievances, and interrupt strangers' nuptials, and if I had to guess, he's probably been kind of miserable ... until this week.

This week, for arguably the first time since leaving office, Trump managed to claw his way back into the headlines and drive the news cycle the way he used to as president — and the way he needs to as a wealthy septuagenarian fueled primarily by ego and spite. Because if there's one thing Trump understands, it's how to leverage attention into power. And after months of no longer having the loudest megaphone around, the former president is now basking in two of his favorite types of scandals: a fight over who can show him the most obsequious loyalty, and an entirely fabricated narrative of personal oppression that will only serve to energize his most fervent sycophants.

First up, after months of simmering tensions, hostilities between the MAGA wing of the GOP and the Republicans' only-slightly-less-Trumpian faction have finally burst to the surface as an open war over who will lead what sort of Republican Party into the 2022 midterms. In one corner is current House Minority caucus chair, and the third-most powerful Republican in Congress, Wyoming Rep. Liz Cheney. In the other, House Minority Leader Kevin McCarthy (R-Calif.), Minority Whip Steve Scalise (R-La.), and an increasing number of rank-and-file representatives eager to remain on Trump's extremely fickle good side. At issue — or at least, ostensibly at issue — are Cheney's recent statements condemning the former president's attempts to overturn the 2020 election in his favor, and her declaration that he should not be allowed to run again in 2024.

In response, the GOP leadership has essentially fractured along a deeply predictable fault line: loyalty to the (still extremely popular within the party) former president, or a transparent attempt to pretend like he was an political aberration rather than an inevitable conservative outcome.

This schism now threatens to dramatically reshuffle power within Republican congressional leadership, as conservatives have increasingly called for Cheney to be ousted as conference chair. Trump himself has thrown his weight behind New York Rep. Elise Stefanik, whom he evidently has deemed sufficiently loyal, to take her place. Does Trump care that a leadership fight before a midterm year could doom Republicans' chances of taking back the House in 2022? Of course not. Does he care that, in terms of actual voting records, Cheney is dramatically more likely to align with his actual policies than Stefanik? Nope. This fight — and the headlines it has inspired — appeals to Trump solely as an exercise in the only sort of power he understands: the public, blunt force subjugation of anyone he deems an enemy, all for his own personal edification. He doesn't actually care what the GOP does once this fight is over, so long as he can declare himself a winner and accept the accolades.

Which brings us to the second scandal Trump seems keen on exploiting for maximal leverage: the extremely high-profile decision by Facebook's Oversight Board on Wednesday to uphold the company's permanent ban on Trump's account ... for the next six months, at which time Facebook will "re-examine the arbitrary penalty it imposed on Jan. 7 and decide the appropriate penalty."

Like the leadership fight, this scandal — if you can really even call it that, lukewarm as Facebook's decision-making has been — has vaulted Trump back into the national headlines, and allowed him entry into once again dictating a news cycle to his own advantage. True to form, he wasted little time doing so, shortly after the decision was announced:

Unlike the leadership fight, which Trump seems keen to frame as an exercise in sheer sycophancy, the Facebook decision has afforded the former president a different, equally effective narrative in which to wrap himself: that of the poor, disadvantaged victim. It's a play we saw him turn to countless times during his presidency, when he was the victim of a "witch hunt," or the "Deep State," or whatever other bogeyman he could concoct.

Of course, Trump is hardly helpless and disadvantaged here. He's a billionaire with almost an entire major political party in his thrall, who this very week launched his own long-promised social media platform. He declared the site "a place to speak freely and safely, straight from the desk of Donald J. Trump," though it looks more like a basic Tumblr account than a revolutionary new way of communicating.

What the Facebook decision does do, however, is allow Trump to once again play victim just enough to get his followers riled up over an issue that has zero impact on their lives — and keep him fresh in their minds at the same time.

On their own, each of these events might not have afforded Trump the headlines he so obviously craves. But by sheer happenstance, the fact that they've occurred within days of each other has created a confluence of the sort of perfectly Trumpian circumstances he's largely missed since leaving office. For the time being, it doesn't actually matter who wins the Cheney/Stefanik fight, or whether or not Trump is eventually allowed back on Facebook. All he cares about is being back in the spotlight. It's all he's ever wanted. It's the only thing he knows how to do.

More like this
Congrats to GOP Rep. Mo Brooks for tweeting his own passwords out to 100k followers
By Rafi Schwartz
Here's a chilling peek into just how close Trump got to running a police state
By Rafi Schwartz
Facebook might let Trump back just in time for the 2024 election
By Rafi Schwartz
Stay up to date