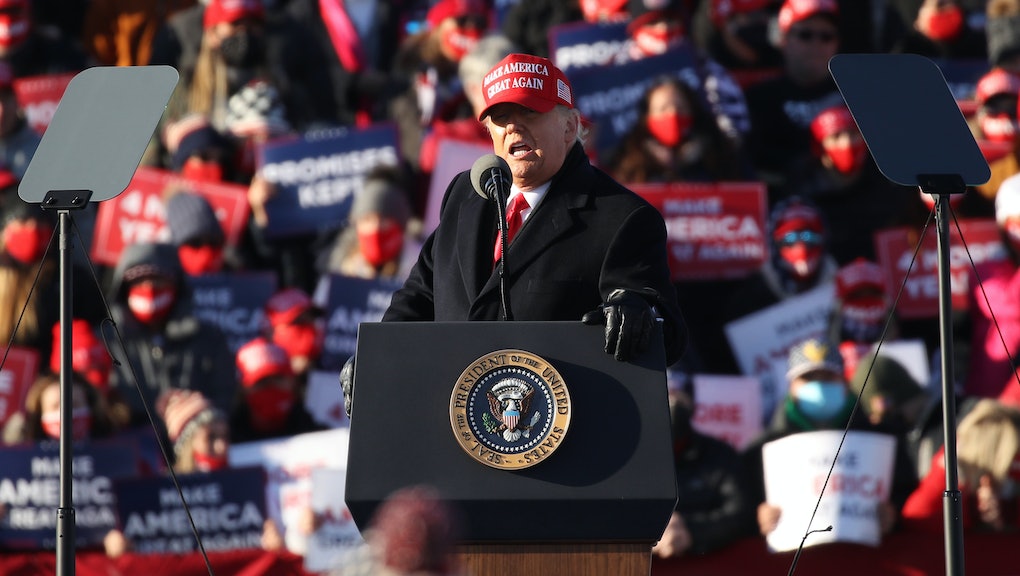 Trump rallies are linked to coronavirus surges in 15 cities

The pandemic that Trump promised would be over by Easter is surging more than ever post-Halloween. Through it all, public health experts have been warning us that failure to adhere to masking and social distancing mandates could cause infection rates to rise meteorically. Unfortunately, 45 has refused to comply with the suggestions offered by scientists and a new study suggests that there is a link between Trump rallies and coronavirus surges.

This new research was conducted by economists at Stanford University and is still ongoing — as is campaign season — but a working copy of the study was released last week. The study investigates the effect that 18 different Trump rallies had on infection rates, COVID-19 hospitalizations, and deaths in the cities where the rallies took place by comparing the demographics, policy measures, and levels of COVID-19 before and after the rallies took place. Fifteen out of 18 of those cities saw marked increases in their COVID-19 infection rates in the weeks following the rally, according to the study.

Confirmed cases of COVID-19 seemed to increase by more than 250 per 100,000 residents in the places the rallies were held, also according to the study. As if that weren’t terrifying enough, the Trump rallies may have led to more than 30,000 cases of COVID-19 and the deaths of more than 700 people. For context, about 8,888 people in the U.S. have died so far of COVID-19, so that means that these rallies are potentially causing about an 8% increase in the death rates for all Americans.

You may be wondering how this is even possible, given that scientists have unequivocally stated that we should all stay masked up and socially distant, particularly when we’re in public. Except that — per usual — Trump doesn’t seem to abide by any advice that he didn’t dole out himself. Trump’s safety precautions at rallies (or lack thereof) have been under scrutiny for months, and this isn’t the first time he’s been called out for creating or contributing to superspreading conditions.

To be clear, it wasn’t just Trump supporters who suffered. The researchers looked, not just at the COVID-19 rates of people who attended Trump rallies, but also at the infection rates in entire communities for a 10-week period following a rally. “The communities in which Trump rallies took place paid a high price in terms of disease and death,” the researchers wrote in their analysis.

The study’s economists also reiterated what we have all assumed for months: “Our analysis strongly supports the warnings and recommendations of public health officials concerning the risk of COVID-19 transmission at large group gatherings, particularly when the degree of compliance with guidelines concerning the use of masks and social distancing is low,” they said. In other words, if you ignore health mandates to stay distanced and also don’t wear a mask, you can easily contract COVID-19 and then infect every person you come into spitting distance of with this deadly disease.

The paper has been described by the White House as “flawed,” Politico reported. Is anyone missing the irony of this administration criticizing the rigor of well-respected social scientists? To be fair, other experts have suggested that the study simply offers a new data point that scientists should not take as fact until the research has been concluded and the work has been peer reviewed. I stan the peer review process, but personally, I also think that common sense is its kind of own science.

This article was originally published on November 2, 2020

More like this
Why this Miami private school doesn't want their teachers vaccinated
By Tracey Anne Duncan
This new coronavirus-repelling mask has a shady chemical in it. Is it worth it?
By C. Michael White
Tattoos and COVID-19 vaccine: How long do I need to wait?
By Melissa Pandika
Stay up to date