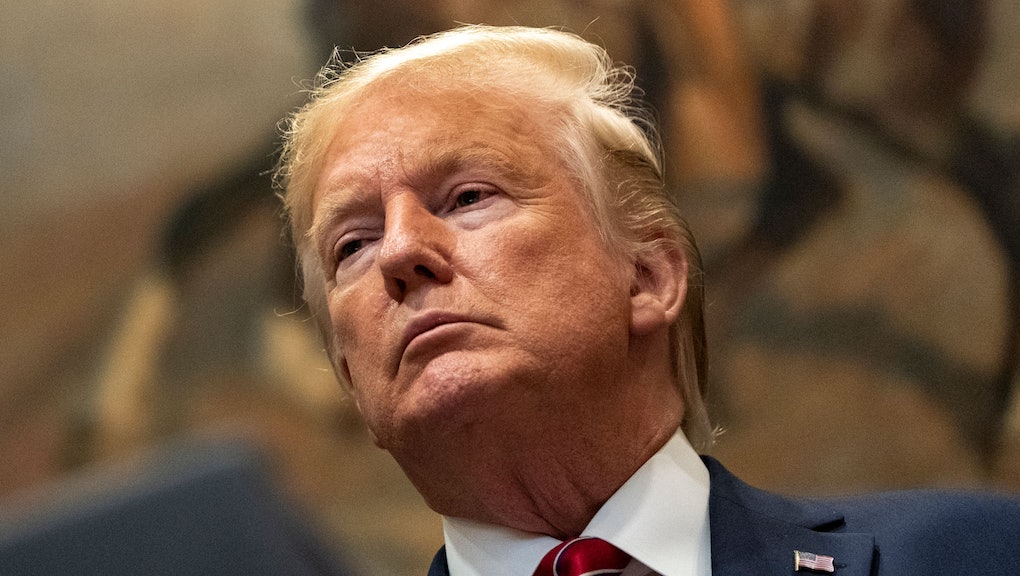 Vaping has seen a surge in popularity across the United States. With rising concerns over teens' use of vapes, many have looked to the government to begin regulating the product. Despite earlier plans to do so, President Trump has revisited his plan to ban flavored vapes, The Washington Post reported late Sunday. It seems that Trump's hesitancy may be driven by the upcoming election year and anxiety over upsetting voters.

E-cigarettes and vapes have been around for awhile, but the Food and Drug Administration hasn't done much about them. However, a Centers for Disease Control and Prevention report that showed vape use among teens rose from 2.1 million in 2017 to 3.6 million in 2018 put pressure on the government to act. Furthermore, as of last week lung illness linked to vaping has killed 42 people and made 2,172 more sick, per the CDC.

Back in September, Trump said that he would ban most flavored vapes to make them less appealing to kids. Under that plan, the Food and Drug Administration would yank popular fruity flavors, along with mint varieties, from both stores and online sellers, The Wall Street Journal reported. A few days prior to Trump's announcement, first lady Melania Trump had tweeted about the "growing epidemic of e-cigarette use among kids."

Trump needed only a little over two months to completely change his stance, though. According to the Post, Trump failed to sign a "decision memo" that would have allowed the Department of Health and Human Services and the FDA to carry out the ban. He was reportedly given the memo on Nov. 4.

What led to the president's change of heart? An anonymous Trump adviser told the Post that the president learned that banning flavored vapes could potentially cost people jobs, what with the closing of vape shops across the country. The New York Times reported that "allies working for the vaping industry" notified Trump that the issue would ultimately lose him votes, additionally noting that the president had been confronted with pro-vape protesters both outside rallies and on social media.

One of the polls commissioned for the Trump campaign on behalf of the Vapor Technology Association, a trade association and lobbying company, showed "negative results" for Trump if he banned the flavored vapes. The poll was conducted among voters in battleground states who vape and "was passed around to a number of people in Mr. Trump’s circle, including Brad Parscale, his campaign manager, and senior White House officials.”

With an election right around the corner, risking votes is apparently just too much for Trump — even for the sake of kids' health. So now the president is singing a new tune, claiming that he wants to hold more discussions about the issue before issuing the ban he once favored.

It's a far cry from his September assertion in the Oval Office that "we can't have our youth be so affected." (It was at this same appearance that Trump uttered the baffling line, "She's got a son, together," about he and Melania's 13-year-old son Barron, in explaining how the first lady got involved in vaping policy.)

Vaping is unlikely to become any less of a political issue moving forward. And with the 2020 campaign set to begin in earnest in mere months, it will be interesting to see if Trump is prompted to change his mind on the issue once again.