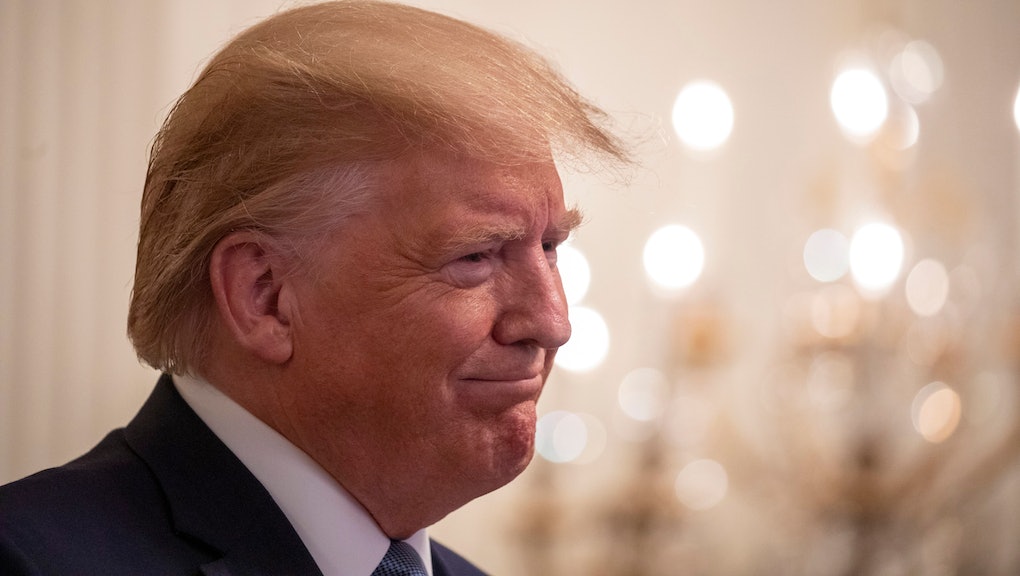 On Tuesday, the Supreme Court heard oral arguments in the three consolidated cases that would decide the fate of the Deferred Action for Childhood Arrivals (DACA) immigration program, which protects nearly 700,000 young immigrants across the country from deportation. In advance of the Supreme Court hearing, Trump attempted to smear those young people on Twitter, but all the president did was highlight how little he knows about the DACA program.

In 2012, President Obama created DACA to protect DREAMers, or unauthorized immigrants brought to the U.S. as kids. The program provides no pathway to citizenship, but instead offers a temporary protected status that shields immigrants from deportation and allows them to work. Since 2017, President Trump has tried to end the program, and on Tuesday he tried to defend his choice by claiming that as DACA recipients aged, they've become "hardened criminals."

"Many of the people in DACA, no longer very young, are far from 'angels,'" he wrote. "Some are very tough, hardened criminals." Still, he said, if the high court rules in his favor and ends the program, "a deal will be made with Dems for them to stay!"

There are a few things wrong with Trump's tweet. To start, it shows a blatant lack of knowledge about who can receive DACA. As Vox immigration reporter Dara Lind wrote in 2018, “[i]mmigrants aren’t eligible for DACA if they’ve committed a felony or significant misdemeanor, or three misdemeanors of any kind. DACA recipients who commit crimes can be stripped of their protections and deported.”

In other words: If Trump was really so worried about DACA-protected criminals, it would mean that he could individually strip their protections rather than end the program wholesale. Furthermore, DACA recipients most commonly entered the U.S. when they were just 3 years old; Trump is using the entirely natural, universal, and inevitable process of growing older to slander them. Immigrant kids who grew up in the United States are not criminals simply because they aged.

But here's the thing: Criminality is routinely brought up as a dogwhistle to justify attacks on entire communities, and it is a tactic that Trump has exhausted. As Immigration and Customs Enforcement raids have escalated, the language was even incorporated into ICE's press releases.

Tellingly, Trump's rhetoric around DACA, now that it's in the Supreme Court's hands, stands in clear contrast to some of his earlier talk about it. At a February 2017 press conference, Trump said DACA was a "very, very difficult subject," he said, "because you know, I love these kids.” He added: “I love kids. I have kids and grandkids and I find it very, very hard doing what the law says exactly to do.”

After announcing his intentions to end the program just seven months later, Trump said that he has "a great love" for DACA recipients. Then, just over a week after that, he tweeted, "Does anybody really want to throw out good, educated and accomplished young people who have jobs, some serving in the military? Really!"

Yet since he began campaigning, Trump has referred to Latino immigrants as "rapists", "drug dealers", "animals", and "bad hombres" who "infest our country". He has targeted innocent Muslims by suggesting they are connected to ISIS. During a 2016 campaign rally in Portland, Maine, Trump specifically attacked Somalis, saying, "We’ve just seen many, many crimes getting worse all the time, and as Maine knows — a major destination for Somali refugees — right, am I right? Well, they’re all talking about it. Maine. Somali refugees."

Despite all of that talk, numerous reports show that being an immigrant is not an indicator of criminality. The president is just using that baseless rhetoric as a guise to crack down on immigration. Under Trump, arrests of undocumented immigrants without convictions in Florida have increased sevenfold compared to during the Obama administration.

With the Supreme Court set to rule on DACA next year, it's clear that Trump is utilizing racist tropes to slander the program's beneficiaries to millions of people online. Troublingly, it might not matter if what he's saying is true or not.

More like this
More than 200 GOP lawmakers asked the Supreme Court to overturn Roe v. Wade
By Rafi Schwartz
Trump finally found some "pussies" he doesn't want to grab: DC's capitol police
By Rafi Schwartz
The DOJ hangs Rep. Mo Brooks out to dry for allegedly inciting the January 6 insurrection
By Rafi Schwartz
Stay up to date