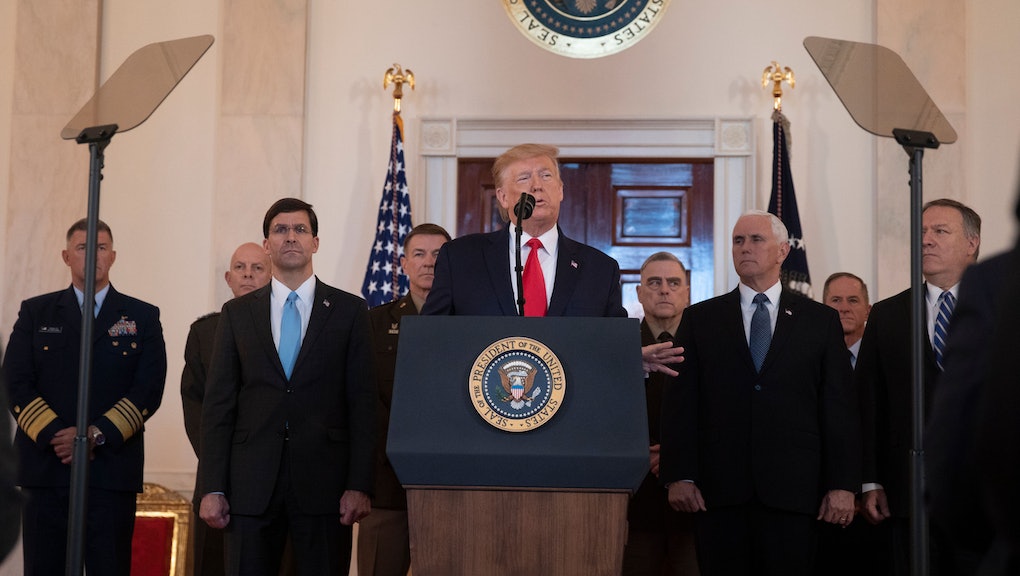 Trump tweets "All is well!" after Iranian missiles target U.S. soldiers. Is it?

Late Tuesday night, news broke that Iran had fired missiles at military bases in Iraq that house thousands of both American and Iraqi soldiers, claiming retaliation for the American assassination of General Qassem Soleimani. “The fierce revenge by the Revolutionary Guards has begun,” wrote the Islamic Revolutionary Guards Corps in a statement.

Iraqi and American officials declared that neither military force suffered any losses. Most of the 22 missiles were aimed at the Al-Asad air base in the Anbar region, while others struck a base in Iraqi Kurdistan.

Shortly after the strikes finished, President Trump posted a message on Twitter. “All is well!” he declared, continuing, “Assessment of casualties & damages taking place now. So far, so good!” He did not make an address to the public Tuesday night, however, despite some initial reports that he would do so.

Iran said the strike “concluded proportionate measures” in response to Soleimani’s death. Still, there’s no reason to assume that this will be Iran’s last show of force in the matter. In a speech this morning, Iranian President Hassan Rouhani declared, “You cut off the hand of Qassem Soleimani from his body, and we will cut off your feet from the region,” according to The New York Times. Ayatollah Ali Khamenei similarly asserted that the U.S. presence must be eliminated from the region.

On Wednesday morning, more than 12 hours after news of the attacks broke, Trump addressed the country in a speech at the White House. It was his first official communication beyond Twitter posts and brief statements to reporters about the aftermath of Soleimani’s assassination. “He should have been terminated long ago,” Trump said, by way of explanation for why the general was killed. He additionally suggested the attack was somewhat of a terrorism countermeasure, calling Soleimani the “world’s top terrorist” and saying his death was a message to would-be attackers that “if they value their life,” they won’t target Americans.

Trump did not provide new details of the attacks that the White House has claimed Soleimani was planning against Americans in the Middle East, but he indicated that the United States would not respond to Iran’s strikes with further attacks. “Iran appears to be standing down, which is a very good thing for America and for the world,” Trump said, before announcing new economic sanctions against the country. On the whole, he struck a pacifist note, saying that war is not a priority. “We do not want to use it,” he said, referring to the U.S. military arsenal. ”American strength both military and economic is the best deterrent."

Of course, being Trump, he couldn’t avoid the opportunity to attack President Barack Obama, saying that the missiles Iran fired at American troops were paid for by “the last administration.”

It’s far from clear at this stage whether all out war will break out between America and Iran. At the moment, Trump’s decision not to retaliate seems to offer a potential off-ramp from conflict, but the idea he presented in his speech that the assassination was meant to prevent a war seems hard to swallow. How exactly does killing another country’s leader stop a war? And how is it that a retaliatory bombing can de-escalate a tense situation?

The entire affair echoes a pattern we’ve seen throughout Trump’s term in office, where he creates crises out of thin air and then manufactures so-called solutions in a haphazard fashion. At this point, the best we can hope for is a fragile peace.

More like this
57% of Republican voters believe Trump only lost because of fraud, per a new poll
By Rafi Schwartz
Trump wanted to quarantine Americans at Gitmo last spring, according to a new book
By Rafi Schwartz
QAnon followers are pretty dejected by Trump's speaking tour with Bill O’Reilly
By AJ Dellinger
Stay up to date