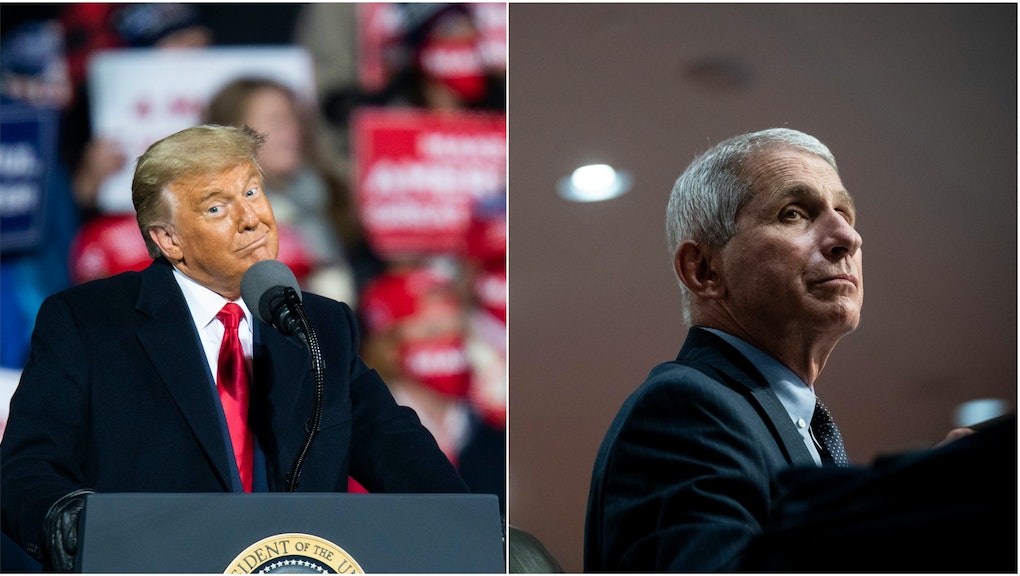 As election tensions soar and the U.S. faces unprecedented new cases of coronavirus infection, Trump really seems to be doubling down on his mishandling of the pandemic. At a late night rally in Miami, Florida, Trump said he would fire Anthony Fauci, director of the National Institute of Allergy and Infectious Diseases, after the election.

Early this morning, Trump supporters at a rally in the Miami Executive Opa-Locka Airport in Florida responded to the president’s complaints about media coronavirus coverage with chants of, “Fire Fauci.” Trump responded by telling the crowd, “Don’t tell anybody, but let me wait until a little bit after the election. I appreciate the advice,” CNN reported. He stated that Fauci is, “a nice guy but he's been wrong a lot,” and intimated that he would indeed fire the man who has tried — unsuccessfully — to be the scientific voice of reason in the White House.

Trump’s political grenade throwing was met with roars of applause by a largely unmasked crowd that continued rallying far past Miami’s COVID-19 safety curfew of 12 am. Trump insisted to crowds that America is turning the corner on coronavirus. Meanwhile in reality, the country is facing record numbers of new infections. On Saturday, more than 99,000 new cases were reported and Fauci warned that the country, “could not possibly be positioned more poorly,” and called for an “abrupt change” in public health behavior, The Washington Post reported.

Trump’s campaign strategy is a prime example of the poor behavior that Fauci warns us could lead to a terrifying death toll. He has been holding large unmasked rallies in cities where infection rates are on the rise and has been breaking local public health mandates in those cities despite the bounty of evidence that these rallies are followed by significant upticks in COVID-19 infection rates, hospitalizations, and deaths.

Fauci and Trump have disagreed so wholly about how to handle the coronavirus pandemic that Fauci, in fact, no longer briefs the president on the scientific realities of the challenge we’re facing. Instead Trump receives guidance from Scott Atlas, a neuroradiologist that is Trump’s favored pandemic advisor, who came under fire this weekend for telling a Russian news network that “lockdowns are killing people,” Axios reported.

Trump has often used his criticism of Fauci as a way to try to convince followers that the pandemic is no big deal. Early in October, Trump called Fauci a “disaster,” on a campaign call and said that if Fauci was in charge, more than half a million people would be dead, CNN reported. But with Trump in charge, we’re already halfway there. Public health experts are predicting that the U.S. will probably suffer more than 410,000 COVID-19 deaths before January.

As Fauci said, it’s pretty hard to imagine things being worse. On the upside, Biden is defending Fauci — and science. This morning Biden tweeted that, “we need a president who will listen to experts.” Fingers crossed that Trump is about to be evicted and replaced with this reason-loving and most definitely lesser evil.

More like this
Studies suggest that Pfizer is no longer the cooler vaccine
By Ian Kumamoto
Could fresh air be the key to ending the pandemic?
By Melissa Pandika
California could ban nonconsensual condom removal. Why isn't this already illegal?
By Melissa Pandika
Stay up to date