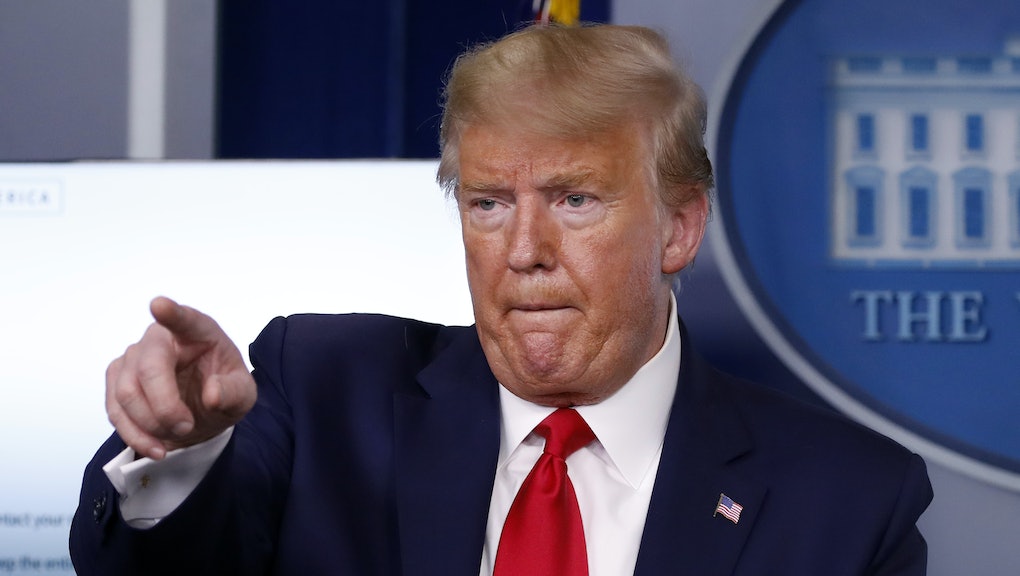 Trump won't reopen Obamacare enrollment, leaving the uninsured out in the cold

Is President Trump actively trying to kill his supporters? At the very least, he’s not helping them get better. Politico reports that the White House has decided against reopening Obamacare enrollment for those without insurance during the coronavirus pandemic, even as Democrats, health care officials, and the insurance companies themselves have called for taking the critical step. Until recently, according to the report, the insurance companies had received indications from the White House that HealthCare.gov would in fact be reopened, giving the 27.5 million uninsured people in the country another chance to sign up for health care. Now, though, Politico claims that the Trump administration has backed away from the idea — without giving the public any kind of explanation.

Initially, some insurance companies were concerned that the flood of coronavirus might swamp them if the window was reopened. “Given the risk posed by COVID-19, it is more important than ever for people to have health coverage,” the CEOs of America’s Health Insurance Plans and Blue Cross Blue Shield Association wrote to Congress in a mid-March letter. As recently as last week, they had received promises from the Trump administration that the exchanges would be reopened. Last night, though, they told Politico that a White House official said that the administration would be "exploring other options" instead.

“This isn’t just an outrageous decision, but it’s also a deadly one,” said Texas Rep. Veronica Escobar (D). “Moments ago, Donald Trump announced we should expect [100,000-200,000] deaths in the U.S. For those without health insurance, this is fatal. It’s time to end this senseless war on health care.”

There’s been a bizarre dynamic at play in the president’s policy decisions, where his whims seem poised to hurt his supporters the most.

It’s hard not to find the politics in all of this. Trump is famously opposed to Obamacare and was furious when his attempts to roll back the law were derailed in Congress in 2017. And despite the coronavirus pandemic ravaging the country, his administration is currently pursuing a lawsuit that threatens to destroy Obamacare and kick its 20 million users off their insurance. Reopening the exchanges now would be an endorsement of the system — something that Trump apparently just can’t stomach.

That’s bad news for his red state supporters. In many of the Democratic states that operate their own insurance exchanges, enrollment has already been reopened over the past few weeks. States including Rhode Island, Massachusetts, and Maryland created their own state-level version of Obamacare, meaning they aren't tied to the whims of the administration.

In 38 states, however, the White House oversees the exchanges. And it’s these states that the president’s apparent personal vendetta is putting at risk. Many of these states are rural and conservative, home to the people who put Trump in office in the first place. Trump has built his campaign and presidency on the idea of supporting the “forgotten” American worker — blue-collar people who work in industries that can’t smoothly switch to telecommuting, who are likely on the front lines of this crisis without the ability to easily practice social distancing.

Meanwhile, for days, Trump insisted that he would reopen the country by Easter, a deadline far too early to be safe and at odds with public health guidance. It was a desire reportedly driven by his personal boredom. He finally backed off the proclamation earlier this week, extending nationwide social distancing guidelines through the month of April.

But the reality is that if he had kept his original, arbitrary April 12 deadline, many red state governors would likely have obliged him — exposing their populations, and those of neighboring states, to increased risk. Indeed, there’s been a bizarre dynamic at play in the president’s policy decisions, where his whims seem poised to hurt his supporters the most.

For Trump, though, image is everything. And he seems to have decided that supporting Obamacare is less tolerable than denying insurance coverage to thousands of Americans during a once-in-a-generation health crisis.