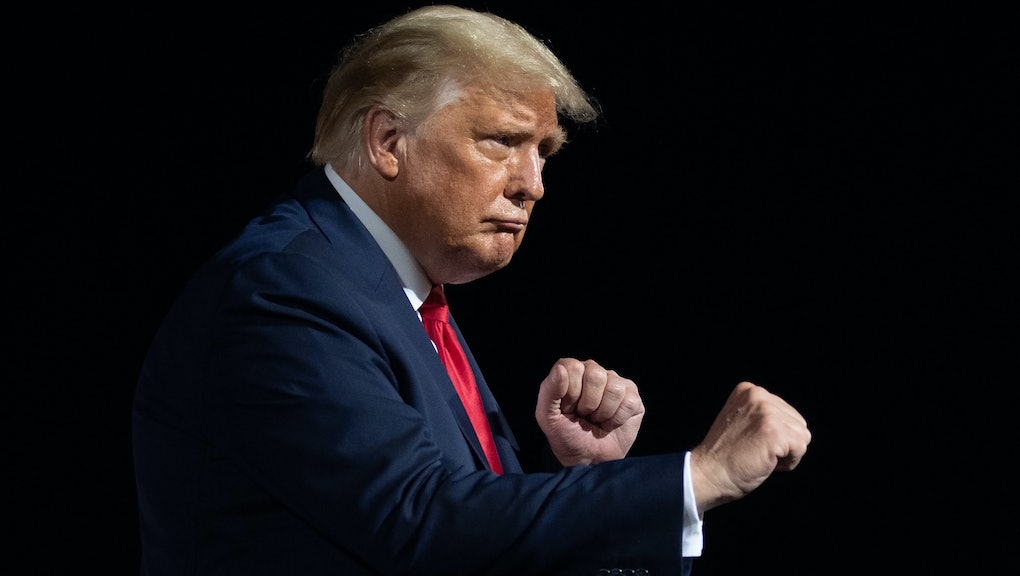 There are evidently people out there who still believe that President Donald Trump is hyper-dimensional master strategist whose chaotic outbursts and moments of embarrassing self-sabotage are ak-shu-a-lee part of a carefully crafted, expertly executed plan to trigger the libs, expose Deep State plots, and whatever other fantastical machinations are called for in the moment. To these people I say: Are you kidding? Have you ingested a near-lethal dose of Owsley acid and are looking at the world through a stupefying lysergic haze? Have you detached yourself from reality and now float free through the nebulous expanse of your warped mind's infinite possibilities? Just consider Trump's 60 Minutes nonsense Thursday; the sequence of events should put to rest any absurd notion that we're dealing with someone who has any sort of "plan," masterful or not.

With less than two weeks to go before voting in the 2020 presidential election concludes, Trump has chosen to pick a fight with one of highest profile journalists on network television, leaking footage of his interview with CBS News's Lesley Stahl in what he insisted would prove the "bias, hatred, and rudeness" of the media, as well as his "full, flowing, and 'magnificently brilliant' answers" during the segment.

What the footage actually shows, however, is a fragile man who throws tantrums, gets huffy at the slightest pushback, and, in a particularly damning segment, essentially cuts a perfectly calibrated attack ad for Democrats to use against him — which, it so happens, they already are, just hours after Trump retched the footage out into the open.

Asked about his phantom health plan, which he has promised for years would be unveiled publicly in "two weeks," Trump insisted it was "fully developed" and "will be" ready if and when the rightward-lurching Supreme Court destroys the Affordable Care Act entirely.

"I hope that they end it," Trump interjected at one point, about the ACA. "It'll be so good if they end it."

In fairness, Trump has hardly made secret his goal of booting millions of people off their health insurance. But the interview with Stahl — which, again, he released thinking it would make him look good — took things to another level by offering the public a short, soundbite-quality clip of the president himself saying those exact words, rather than hiding behind legal obfuscation and lying surrogates.

And he wasn't done yet.

When pressed about what would happen to people with pre-existing conditions who are covered under the Affordable Care Act, Trump channeled his inner grade schooler, simply repeating the oblique statement that people "would be protected" over and over again. He offered no explanation of how, or even a hint that he really spent any time thinking about the question beyond the basic proposition that it sounds nice when he says people should be covered for pre-existing conditions.

Now, loading this footage into a comedically oversized blunderbuss with the word "ACME" painted across the side, pointing it at his crotch, and pulling the trigger would, even on an ordinary day, put a hilarious nail in the coffin of the notion that Trump has any idea what he's doing here. But as it happened, he released the footage just hours before his final presidential debate with Joe Biden, essentially hading the Biden camp a full array of weaponized talking points with which to attack the president onstage — all while the DNC, the Biden campaign, and any number of other interested parties now have nearly an hour of new footage to create snappy attack ads ready to bombard the airwaves in battleground states.

Talk about snatching defeat from the jaws of victory.

Of course, if this administration has proven anything over the past four years, it's that the standard slip-ups that would end the career of anyone with even a modicum of decency and shame have no real power over Trump and his allies. But at the very least, this latest masterful media move should put to rest once and for all that we're dealing with someone who has any sort of plan for what might comes next.

More like this
There are already 19 QAnon candidates running for Congress in 2022
By Rafi Schwartz
Supreme Court justices' political leanings: A guide to the 2021 court
By Vanessa Taylor
Here's a chilling peek into just how close Trump got to running a police state
By Rafi Schwartz
Stay up to date