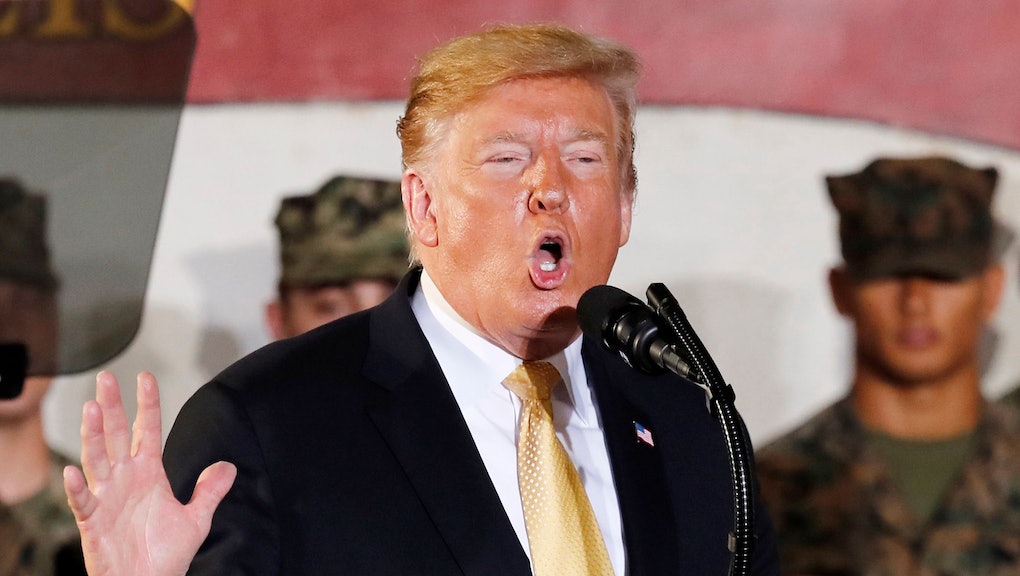 It looks like President Trump's decision to withdraw the United States from the Paris Climate Agreement was only the beginning for the war on climate science. Over the next few months, Trump's climate change policies are expected to repeal the remains of Obama-era regulations set forth in a bid to curb environmentally-damaging emissions. And the EPA is expected to work this summer to complete its rollback on federal regulations meant to limit pollution from vehicle tailpipes and power plants.

Further, according to a new report from The New York Times, U.S. Geological Survey Director James Reilly has given the directive to continue studying the detrimental effects of climate change on the earth only up to 2040. This means that efforts to analyze further damage would essentially cease, leaving the climate effects felt throughout the rest of the century unmeasured and unresearched. It's possible Reilly, a former petroleum geologist appointed by Trump himself, is interested in going down this path for one obvious reason. According to the New York Times, scientists agree that most of the biggest effects from current emissions will actually be felt following 2040. Eliminating research on what will happen after 2040 would likely further downplay climate change as a threat.

Thanks to models created by scientists in an effort to project what the future of the planet looks like, we can surmise that the planet will continue to heat at the same rate through 2050. From there on out, it could get even warmer. With carbon dioxide levels in Earth's atmosphere recently reaching alarming new milestones, at the highest point they've ever been throughout the entirety of recorded human history, this administration decision could be the next step to signing the Earth of the future's death warrant.

In addition to ignoring the implications of climate change after 2040, any sort of "worst-case scenario" projections in terms of what could happen to Earth may not be included in any future reports on climate science, such as the National Climate Assessment. Typically, this report is prepared in tandem by several government-based agencies and comes out around every 3 to 4 years. The latest National Climate Assessment was released last fall, and the 1,600-page report warned that Earth's climate is "changing faster than at any point in the history of modern civilization, primarily as a result of human activities." It also noted that the impact of said activities are projected to "intensify" in the future.

Ahead of that report's debut, during an interview with 60 Minutes in October 2018, Trump stated that he didn't "know" that climate change is manmade. "I think something’s happening. Something’s changing and it’ll change back again," he offered. With the assessment out for the public to read, he dismissed it, saying "I don't believe it." The next report is currently being prepared, and is projected to be released in 2021 or 2022.

Rather than simply denying the fact that climate change is very real, the Trump administration also seems to be putting together a plan to more efficiently "negate" its existence going forward. Trump is reportedly currently forming a panel that would exist solely for discrediting climate scientists and the idea that climate change is a very real threat to humanity.

Former Princeton professor William Happer would be tasked with leading the panel. He once called the "demonization" of carbon dioxide, the greenhouse gas scientists blame for rising temperatures, like "the demonization of the poor Jews under Hitler."

It's not just naysaying and denial that Trump and his staff are participating in , however. Some members of the Trump administration are bizarrely taking the opportunity to praise the effects of climate change. While speaking to the Arctic Council in early May, Secretary of State Mike Pompeo noted that glaciers melting as a result of the planet's rising temperature is "opening new passageways and new opportunities for trade."

With these willful statements of ignorance and active moves to discredit the scientists working diligently to ensure we've still got a planet to protect when the effects of climate change become even more severe, it appears the Trump administration is working to abolish the idea of change itself.