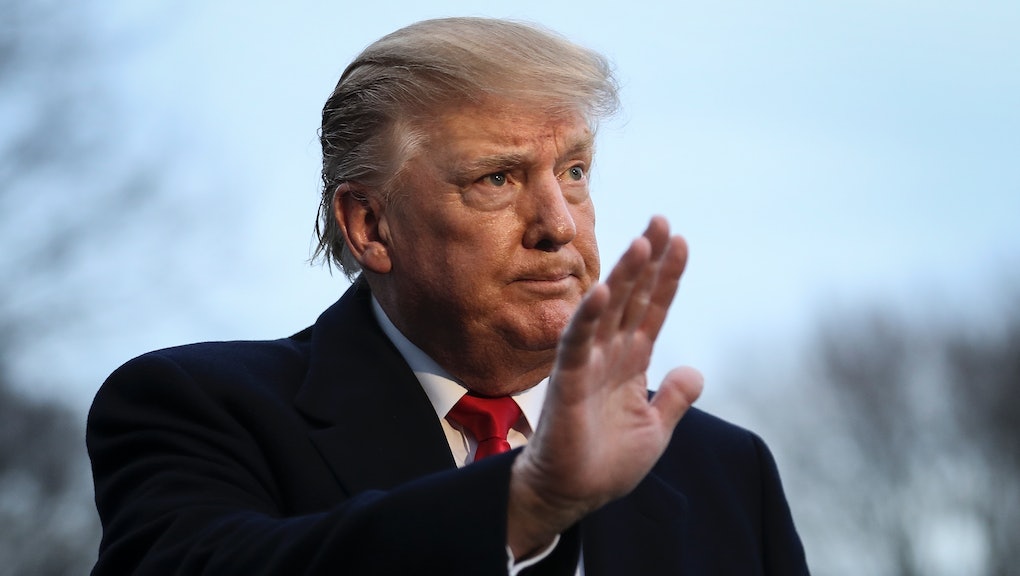 Concerns regarding President Trump's numerous properties and businesses have been a recurring theme throughout his presidency. Trump handed off his business empire to his sons in January 2017, but they only took over day-to-day operations; Trump is still the owner of the company. Now, a report from The Washington Post says that company has made nearly $1 million from U.S. taxpayers since Trump took office.

Federal records obtained by the Post show that the U.S. government has paid at least $970,000 to Trump's businesses. This includes more than 1,600 payments for rooms at his hotels and clubs. Since March, the Post recorded an additional $340,000 in payments, most of which were "related to trips taken by Trump, his family, and his top officials."

To help put these numbers into perspective, the Post said the sum is roughly equivalent to if taxpayers booked four years' worth of nightly rentals at Trump properties. The most shocking part is that the documents are being released slowly and progressively, so the total could in reality be even more.

"It's not just that there's being a huge amount of money being spent: We have no idea how much the actual figure is," Jordan Libowitz, of the nonprofit Citizens for Responsibility and Ethics in Washington, told the Post. "We don't know what's happening ... only that the taxpayers are footing the bill for it."

While the Post acknowledges the data is incomplete, the paper noted that "the payments create an unprecedented business relationship between the president's private company and his government — which began in the first month of Trump's presidency."

Trump and his sons have come up with a number of excuses for these questionable practices. Last year, Politico debunked Trump's claims that his resorts are easier for law enforcement to keep secure. Donald Mihalek, who served in the Secret Service for 20 years, told the outlet, "Although it can be helpful to have protected a location before, even recurring locations of protection, like the U.S. Capitol, go through the same methodology each time due to situational changes."

Eric Trump, the president's middle son and the Trump Organization's executive vice president, also once claimed the government "saves a fortune" by having officials stay at Trump's properties. He said, "If they were to go to a hotel across the street, they'd be charging them $500 a night, whereas, you know, we charge them like $50." But the Post found that none of the rooms paid for with taxpayer dollars were priced that low.

This is not the first time that records have shown Trump is profiting from his presidency. In December 2017, the Center for Responsive Politics found that Trump and Republican lawmakers spent over $1 million at Trump-branded properties for political and fundraising events during his first year in office. Then in 2019, another report found that conservatives have spent millions at Trump resorts since he took office — possibly in efforts to curry favor with his administration.

In addition, last year records showed that the Secret Service alone spent over $250,000 at Trump properties in the first five months of his presidency. The majority of expenses occurred at Trump's golf clubs (collectively referred to as "Trump National Golf Club"), where a single day in April 2017 racked up a $26,802 bill.

Democrats have also investigated allegations that numerous groups, including one foreign government, booked rooms at Trump's Washington Hotel to possibly gain his favor. House Oversight Committee member Rep. Gerry Connolly (D-Va.), who chairs the subcommittee with jurisdiction over Trump's hotels in Washington, said it was "near raw bribery."

More like this
Nearly half of Republicans believe absolute nonsense about Trump's Capitol coup
By Rafi Schwartz
Um, Biden's big immigration deal seems pretty similar to Trump's
By AJ Dellinger
New York has set aside a massive, first-of-its-kind fund for undocumented workers
By Rafi Schwartz
Stay up to date