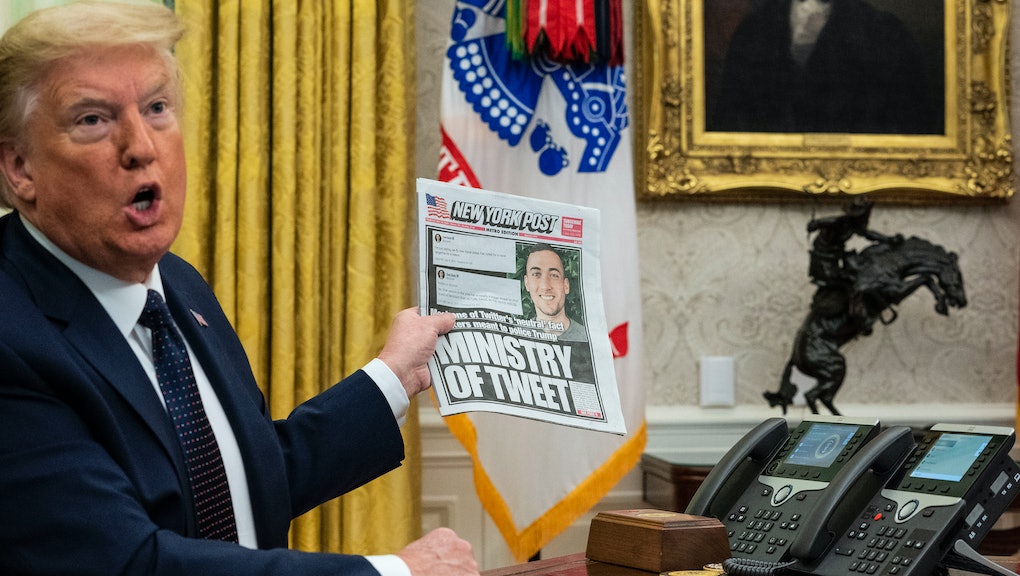 Trump's executive order on social media is "deluded," according to legal experts

On Tuesday, President Trump sent out two tweets in which he claimed mail-in ballots will lead to a rigged presidential election. That same day, Twitter placed a small disclaimer under the tweets that read "Get the facts about mail-in ballots," which linked to a fact check of the president's claims. By Tuesday evening, Trump was claiming that Twitter was stifling free speech and trying to interfere with the 2020 election. On Wednesday, he threatened to "strongly regulate, or close" social media platforms that are unfair to conservatives. Today, he signed an executive order seeking to limit the legal protections that keep social media companies from being held liable for what users share on their platforms.

Trump's executive order, a draft of which leaked yesterday (the final version has not yet been made public), takes particular issue with Section 230 of the Communications Decency Act. At the core of this law is the idea that platforms are not responsible for the content that others post on them. Ashkhen Kazaryan, director of civil liberties and legal research fellow at TechFreedom, describes Section 230 as "what makes platforms possible and it's also what makes the internet as we know it possible." She explains, "If you write in my comment section on my website, should I be considered the publisher of your comment? That's just not doable. It's not scalable. There are millions of posts going up every minute around the world. There is no amount of moderators that a company can hire that would actually approve of each post."

Section 230 also gives platform providers the ability to "restrict access to or availability of material" that may be considered obscene, harassing, or objectionable for any number of reasons under a so-called "Good Samaritan" clause. Chris Lewis, the president and CEO of open internet advocacy group Public Knowledge, tells Mic that the section of the law effectively provides "immunity" to platforms to "moderate and edit third-party content, as long as they are making good-faith efforts."

Trump appears to believe that clause is too broad and is attempting to narrow it. In particular, the president believes that the law has allowed for online platforms to engage in what is referred to in the draft executive order as "selective censorship." The order cites issues like the "flagging" of content as inappropriate even when it doesn't violate terms of service, unannounced changes to policies that "have the effect of disfavoring certain viewpoints," and "deleting content and entire accounts with no warning, no rationale, and no recourse."

In the president's apparent view, it seems he believes the fact check that Twitter applied to two of his tweets is in violation of Section 230's "Good Samaritan" clause. "From what I can tell, the order is trying to say that Twitter isn't taking any of those actions with the fact check, so Twitter should lose its immunity," Faith Sparr, a communications law and media policy lecturer at the University of Michigan, tells Mic.

In order to enforce this new interpretation of Section 230, Trump is enlisting four government agencies. First, he's asking the Federal Communications Commission (FCC) to "clarify the conditions under which an action restricting access to or availability of material is not 'taken in good faith.'" It's not clear that this is actually something within the FCC's power. "The FCC is an independent agency and its authority comes from Congress," Lewis explains. "We don't believe that the FCC has the authority to actually make rules when it comes to narrowing the scope of [Section] 230."

"Now does the FCC have to do it? No. There is no obligation for FCC to do anything." - Ashkhen Kazaryan

In order to get around this issue, the Trump administration has enlisted the National Telecommunications and Information Administration (NTIA), under the Department of Commerce, to ask the FCC to make the rules. This theoretically gets around the fact that the FCC doesn't take orders directly from the president. "Now does the FCC have to do it? No. There is no obligation for FCC to do anything," explains Kazaryan.

The other major agency that takes up a role in Trump's order is the Federal Trade Commission. Under the draft order, the FTC "shall consider taking action" to "prohibit unfair or deceptive acts or practices in or affecting commerce," including "practices by entities regulated by Section 230 that restrict speech in ways that do not align with those entities’ public representations about those practices." If the FTC finds the platforms to be in violation of this new, narrow reading of Section 230, then it may prohibit the spending of federal taxpayer dollars on advertising on those platforms. Given that federal agencies spend about $1.5 billion per year in advertising on social media platforms, it's a pretty significant threat. However, it seems unlikely that the agency would ever actually enforce this. "Any FTC action would violate the First Amendment. Plain and simple," says Kazaryan.

"Trump has no authority to dictate how [Section 230] will be interpreted or enforced." - Faith Sparr

The final part of the leaked order asks state Attorneys General and the Department of Justice to convene a working group to discuss "potential enforcement of State statutes that prohibit online platforms from engaging in unfair and deceptive acts and practices." Kazaryan reasoned that would be the "most plausible" part of the executive order, though it's unclear if any action would come of the group.

Most experts believe that the majority of the Executive Order is unenforceable. Sparr says, "Trump has no authority to dictate how [Section 230] will be interpreted or enforced," and noted that the FCC doesn't really enforce the "Good Samaritan" section of the law, anyway. "It operates as a shield for service providers when and if they are sued in court," she explained. Sparr also noted that while online platforms could theoretically be subject to an FTC review for false and misleading advertising if those platforms weren't living up to the terms and conditions they set, says, "I don't think that is happening with Twitter." She notes that the executive order likely wouldn't even address Trump's initial complaint about being fact-checked on Twitter, though "it could have some incidental effect wherein Twitter doesn't append any fact checks to Trump's tweets anymore because it's not worth this sort of outsized hassle."

Catherine Gellis, a lawyer and expert on internet law, tells Mic that "it's hard to credit anything about the executive order." She described it as trying " to make up a new law that acts as though none of that legal protection exists," and said that isn't within Trump's powers. "He doesn't have the power to rewrite legislation that Congress wrote, or re-interpret how courts have understood it. And he definitely doesn't have the power to ignore the First Amendment and pretend that the executive branch has any authority to regulate the sort of editorial decision that Twitter made," she says.

As for the executive order actually being enforced, Gellis says, we're in uncharted territory. "It's so deluded about how the law works that it's hard to see how it would actually have any legal weight. But just because it shouldn't have the legal power to force the FCC and FTC to act doesn't mean that it won't have the political ability to pressure them to act." She notes that if the agencies do attempt to enforce the law, if only to appease the president, "then those actions may be subject to legal challenge, but it's all such a mess that it's hard to know for sure what will happen."

Like most attention-grabbing actions from Trump, it’s likely that this one is more pomp and circumstance than substance. Kazaryan described the order as “virtue signaling,” but “virtue signaling that also make statements about the First Amendment of the Constitution and Section 230 law that are misleading and sometimes outright wrong.” Yesterday, the death toll for coronavirus in the US climbed above 100,000. Trump certainly has plenty he’d like to distract the public from.