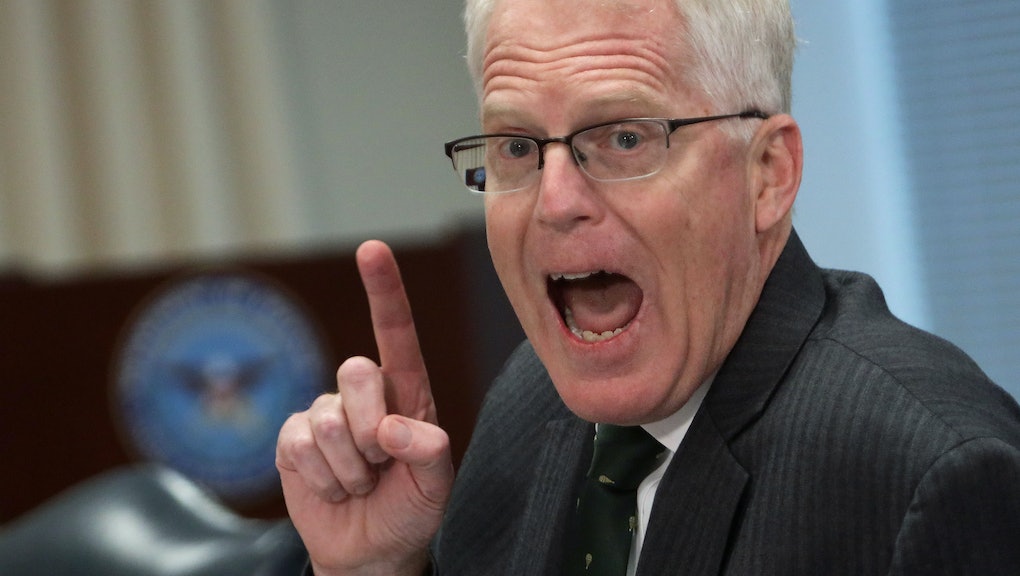 They say "better late than never," and I suppose that's technically true, but there's gotta be some sort of cut-off point, right? Like, for instance, say the president of the United States got up in front of a crowd of people (and banks of television cameras) to encourage them to storm the U.S. Capitol in an obvious attempt to disrupt the certification of his electoral defeat. When do we stop giving people credit for making the painfully obvious point that, yes, he did do that?

I don't have a hard time frame in mind, personally, but I'd like to think that the two-months-and-change since former President Donald Trump did exactly that is probably too long a stretch for anyone to suddenly expect a pat on the back for having the courage to accurately describe what we all saw for ourselves. And I'm not simply conducting a thought experiment for the sake of giving the ol' noodle a much needed workout. I'm talking specifically about former Acting Secretary of Defense Chris Miller — the man Trump installed in the waning days of his administration after ignominiously booting his predecessor shortly after the 2020 presidential election.

"Would anybody have marched on the Capitol, and overrun the Capitol, without the president's speech?" Miller asked Vice On Showtime host Seb Walker in a just-released clip from an interview set to air this coming weekend. "I think it's pretty much definitive that wouldn't have happened," Miller continued, answering his own rhetorical question.

Miller has hardly been shy about criticizing his former boss and benefactor in the past. Just weeks after the Jan. 6 insurrection attempt, Miller spoke with Vanity Fair and offered his decidedly negative impression of, well, just about everything — the Trump administration, the Department of Defense itself, you name it. Miller also suggested in that interview that Trump himself knew ahead of time that Jan. 6 had the potential to get out of hand, telling Vanity Fair that the former president had told him: "You do what you need to do. You do what you need to do. You’re going to need 10,000 [people to control the situation]."

That admission by Miller seems to run counter to his insisting to Vice On Showtime that, despite it seeming "cause and effect," he "didn't know" if Trump had deliberately begun "enraging" the crowd to march to the Capitol building following his speech.

So, while it's not a bad thing that Miller has gone on the record to definitively link Trump to the events of Jan. 6, let's hold off on dropping confetti and eating cake in his honor just yet.