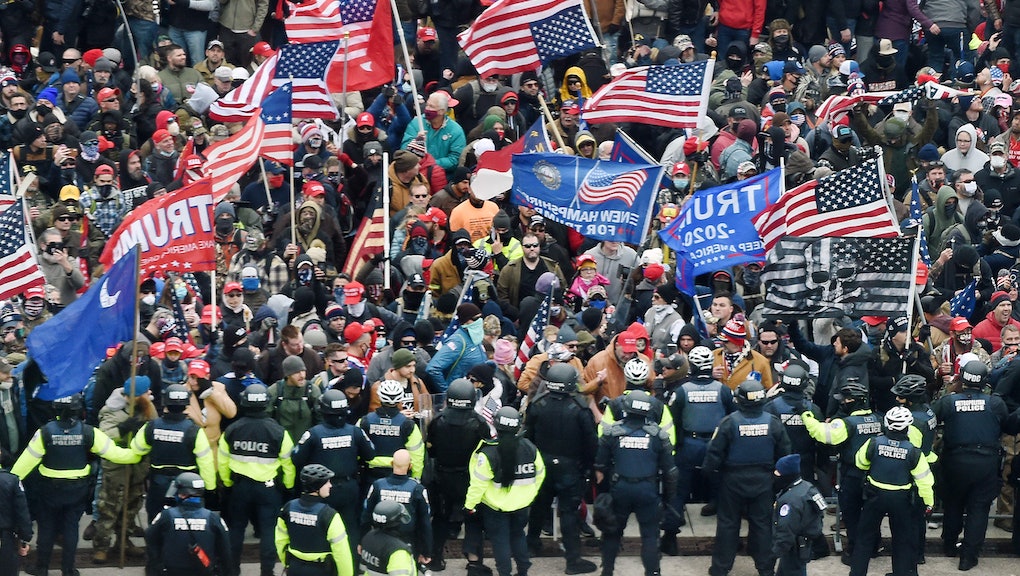 In the aftermath of last week's siege on the United States Capitol Building, more details of the day continue to rise to the surface. As Democrats in the House of Representatives introduced a new article of impeachment against President Trump, we're still piecing together information about what happened on the ground, how we move forward, if ex-military and ex-law enforcement were involved, and if it's possible to criminally charge Trump with inciting violence.

Out of all this, one thing is clear: We're still learning about what happened last Wednesday. And though it's likely we'll be piecing together facts for days, if not weeks, to come, here are five of the most alarming details about the assault on the U.S. Capitol.

There could've been a hostage situation

Initial footage of Wednesday's siege on the Capitol appeared haphazard, and some even claimed the insurrection was spontaneous, despite the fact that Trump himself foreshadowed it for weeks and said at a speech before the raid that his supporters should march down to the Capitol. But photos from that day make it seem like there was much more premeditation than we initially may have realized.

As Dan Kois wrote for Slate, some insurrectionists wore masks, which is a strategy often employed by people who do not want authorities to be able to identify them. Others appeared equipped with police-level restraints and other tools of aggression, like plate carriers and other tactical gear. "They moved with purpose, to the offices of major figures like Nancy Pelosi and then to the Senate floor," Kois wrote. "What was that purpose? It wasn’t to pose for photos. It was to use those flex cuffs on someone."

They were coming for the vice president

At his speech right before his supporters stormed Capitol Hill, Trump repeatedly said that Vice President Mike Pence had to "come through for us" and "do the right thing" — a.k.a., steal the election from President-elect Joe Biden based on false allegations of voter fraud. Trump spent several days urging Pence in public to act, setting the vice president up as a target for when Biden was, correctly, certified as the winner of the presidential election instead of Trump. It seems Trump's setting up of Pence as the scapegoat narrowly avoided having ghastly consequences, as after Wednesday's siege it was uncovered that several of the rioters had threatened Pence directly, with many saying that they would like to execute him by hanging him from a tree on Capitol grounds. There is video of the mob chanting "Hang Mike Pence!" while inside the Capitol building, and a gallows was erected on the nearby grounds.

Evacuated lawmakers were likely forced into a superspreader event

After lawmakers were ushered into a secure room, they were told to stay put for at least four hours. Most were wearing masks, but many Republicans weren't. Now, it seems that lawmakers who were forced to shelter in place due to the imminent threat outside may have also been exposed to a coronavirus superspreader event. Democratic Rep. Bonnie Watson Coleman, the 75-year-old lawmaker from New Jersey announced Monday that she had tested positive for coronavirus.

Democratic Rep. Pramila Jayapal (Wash.) similarly announced Tuesday that she had tested positive for coronavirus after sheltering in place with Republican colleagues who refused to wear masks. Dr. Robert Redfield, the director of the Centers for Disease Control and Prevention, said last week of the riot: "You have to anticipate that this is another surge event."

We've all seen the photo of the insurrectionist sitting at the desk of House Speaker Nancy Pelosi (D-Calif.), which raised the obvious question: What happens if someone's computer is hacked or stolen? There were multiple reports that lawmakers were forced to evacuate in such a hurry that emails and other sensitive information was still visible on their computer screens, and several of the rioters posed with stolen property in photos from the siege. The Justice Department acknowledged last week that "national security equities" had likely been stolen by the Trump-supporting mob.

Additionally, the day after the riot, Sen. Jeff Merkley (D-Ore.) announced that a rioter had stolen a laptop from his office, per The Hill. Merkley sits on the Senate Foreign Relations Committee and the Senate Appropriations Committee, and information found on the laptop could be highly sensitive.

There have been zero public statements from the federal government

The FBI has received over 40,000 tips from the public related to individuals who broke into the Capitol building, per The New York Times. But other than the crowdsourcing of information about the rioters' identities, neither the intelligence community nor federal authorities have made a public address or offered any information about the stunning attack on the seat of U.S. government. Trump initially issued a half-hearted plea for his supporters to "stay peaceful," followed by a farcical video in which he told the rioters, "You're very special. We love you." His statements on Twitter during and after the attack prompted the social media service to permanently ban his account.

More like this
Is it time for America to have a legit third party?
By Rafi Schwartz
How the treasury secretary keeps America's economy afloat
By Vanessa Taylor
Why grand jury proceedings are so secretive
By Vanessa Taylor
Stay up to date