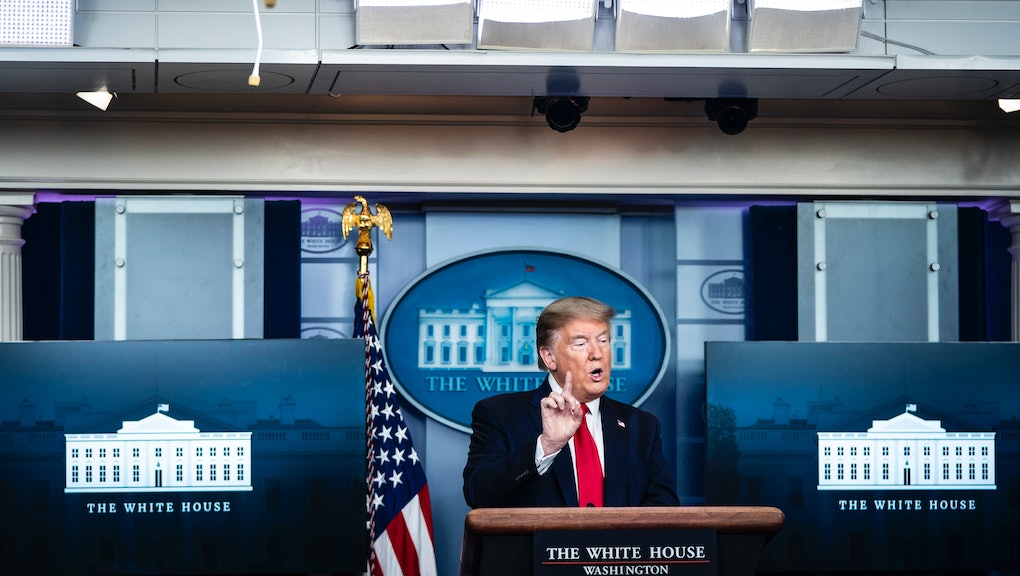 Trump's latest coronavirus briefing was his longest — and angriest — yet

President Trump on Monday fell into a trap that has beguiled us all at one point or another: He got frustrated and blurted out exactly what he thinks rather than couching those thoughts in a bit of civil rhetoric. The president's nightly coronavirus briefing was decidedly combative, with several reporters pressing Trump on his administration's lagging response to the global pandemic, on his claim that he could singlehandedly dictate when individual states are allowed to begin resuming a semblance of regular life, and on his insistence that Dr. Anthony Fauci "clarify" comments he'd made over the weekend that were guilty only of being medically logical.

As state governors in the country's coastal regions have started to band together to coordinate their states' post-social distancing plans, Trump has insisted that he alone as president has the authority to reopen state economies. In a tweet Monday morning, he falsely blamed the news media for fabricating the idea that governors control their states "for the purpose of creating conflict and confusion."

Governors on both sides of the country have started to form pacts to coordinate reopening their economies. On the East Coast, the governors of New York, New Jersey, Connecticut, Rhode Island, Pennsylvania, Delaware, and Massachusetts have said they will come together in a working group comprised of an economic expert, a public health official, and the governor's chief of staff from each state, per CNN. On the West Coast, the governors of California, Oregon, and Washington announced a similar pact.

Trump was asked by several reporters about these gubernatorial actions in Monday evening's briefing. One reporter asked "what provision in the Constitution gives the president the power to open or close state economies," prompting the president to respond vaguely, "Numerous provisions." Another reporter followed up, asking specifically about the two blocs of states and whether Trump was planning to override those decision-makers, to which Trump replied: "I'm going to put it very simply. ... The president of the United States calls the shots."

Asked then by a third reporter to "clarify your understanding of your authority vis-a-vis governors," Trump said it directly: "When somebody is the president of the United States, the authority is total. And that's the way it's gotta be."

CNN's Kaitlin Collins, finally, really drew out Trump's ire at the question. "You said, 'When someone is president of the United States their authority is total.' That is not true. Who told you that?" Trump responded by again referencing vague "papers" that he claims give the president overarching authority over states, and insisted that "we're getting along very well with the governors." When Collins asked whether any governor had acquiesced to Trump's claim that his authority supersedes theirs when it comes to state-level decisions, Trump said, "I haven't asked anybody. You know why? Because I don't have to." Then he shushed her by putting a finger in the air and saying, "Enough."

Despite his insistence that his reign over the country is "total" as president, Trump elsewhere displayed a distaste for asking how exactly he'd wielded that "total" authority. CBS News White House correspondent Paula Reid asked Trump a simple question — what did his administration do during the month of February to prepare for the coronavirus pandemic? — and the president simply could not answer the question.

Trump has long pointed to his decision to ban travel from China in January, saying at points that the move saved hundreds of thousands of lives. (Studies have shown that's almost certainly not true.) In fact, that's been Trump's main defense when he's been questioned about his administration's fatally insufficient response to the public health crisis. So when Reid acknowledged that Trump banned travel from China in January, and rather asked Trump what he did during the month of February — ostensibly time he'd gained to prepare for the virus, if his insistence that the January ban was prescient and effective was true — he did not handle the question well.

"You're so disgraceful," he told Reid, when she correctly told the president that he didn't use the month of February to prepare the nation's health infrastructure at all. Eventually, he screamed at her that his administration had done "a lot" before calling Reid "a fake" and talking about her "approval rating." He tossed in a random shot at Joe Biden for good measure, but he never named a single thing his government had done in the month of February to prepare for coronavirus.

Unfortunately for him, his refusal to answer the question meant some reporters did it for him.

Reid later noted that Monday's coronavirus briefing was the longest one yet, clocking in near two-and-a-half hours. Luckily for us, that left enough time for Fauci to be trotted out to apologize for his "poor choice of words" over the weekend, when he said that if resources had been mobilized earlier and stay-at-home orders had been instituted sooner, then fewer Americans likely would've died from coronavirus. Reid felt pressed to ask whether Fauci was correcting himself "voluntarily."

The doctor insisted that he was. "Don't even imply that," he said. But the fact that the question was asked in the first place says a lot about the state of our nation.