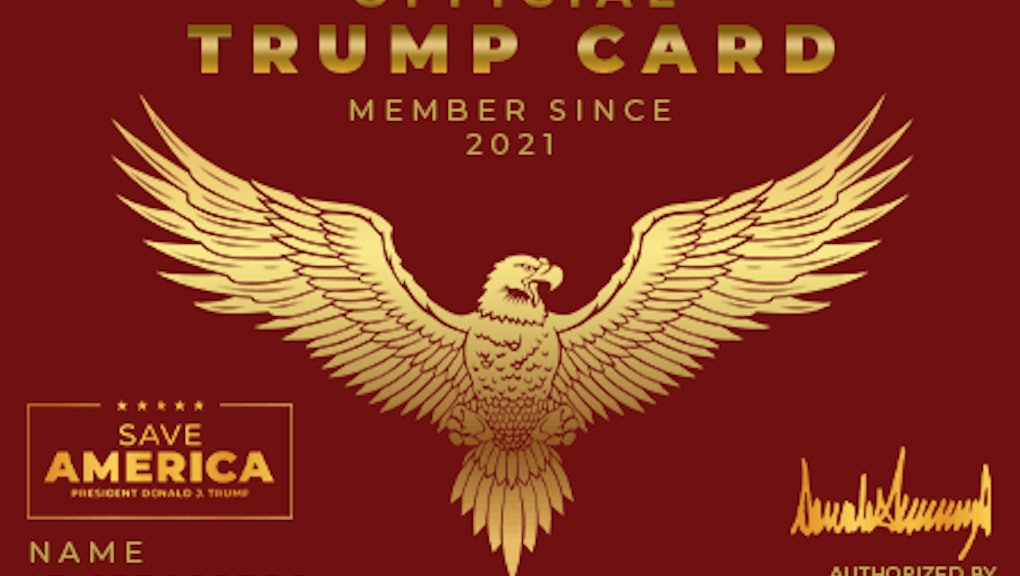 Let it never be said that former President Donald Trump lacks for new and exciting ways to casually extract as much cash as possible from his dedicated legion of enthusiastic suckers. His personal website offers $40 T-shirts and $15 Trump-themed drinking straws (plastic, of course). His eponymous company sells bags of Trump-brand nuts for prices that would make the executives at Hudson News blush. And as of this week, Trump is readying his next great money-making scheme: branded membership cards!

In an email sent to the former president's mailing list on Wednesday evening, the unnamed members of "Team Trump" announced the forthcoming launch of "Official Trump Cards, which will be reserved for President Trump’s STRONGEST supporters."

"Originally we were planning on releasing just one design," the email continued, "but when President Trump saw the cards on his desk, he said, “These are BEAUTIFUL. We should let the American People decide - they ALWAYS know best!”

Golly, isn't that nice? Here are the options, each one a unique and beautiful mixture of "garishly" and "lazy" design.

As many have pointed out online, the cards — particularly the golden eagle option — have an undeniable air of fascistic triumphalism to them, which, okay, true, although have you seen the Great Seal of the United States lately? Much as it's easy — and incredibly understandable! — to make the very obvious connection between everything associated with Trump and the xenophobic totalitarianism he helped animate, it's not like we're exactly lacking for fascist imagery elsewhere in American society.

What's less easy to understand is what, exactly, these cards....are? As they each proclaim alongside Trump's hilariously illegible scrawl, bearers will be identified with a unique membership ID number. But membership to what, exactly? Nowhere in the Team Trump email does it say anything about what these cards are for, or what you'll get for carrying one — beyond the smug satisfaction of presumably having shelled out some undisclosed amount of "donation" money for the honor and privilege of...what? Telling the world you like Trump? Congrats. You could do that for free, without having to cut a check to a billionaire who lived in a literal golden tower. Hell, when I was in kindergarten, my pal Ben and I founded a Batman fan club (members: two) and drew our own membership cards on construction paper — and frankly, those were about as worthwhile as whatever pablum Trump is shoving down the gullet of his MAGA followers.

"President Trump always values your input," his team's email concludes. "He has made it clear that YOUR voice is the ONLY one that matters."

Well, my voice says this is just the latest uninspired grift from a man who has made the art of grifting his personal and professional philosophy. Who cares which design Trump ultimately chooses? Not me. Not him. And ultimately, not anyone who actually thinks these cards matter. They'll go right along with whatever he absentmindedly goes for in a split second decision that's less about aesthetics than it is about getting his aides to leave him alone so he can watch more TV. He'll inevitably get his money. His followers will get a worthless tchotchke to show the world they're hapless suckers. The world will keep spinning, and eventually Trump will move on to his next brilliant grift. The end, no moral.