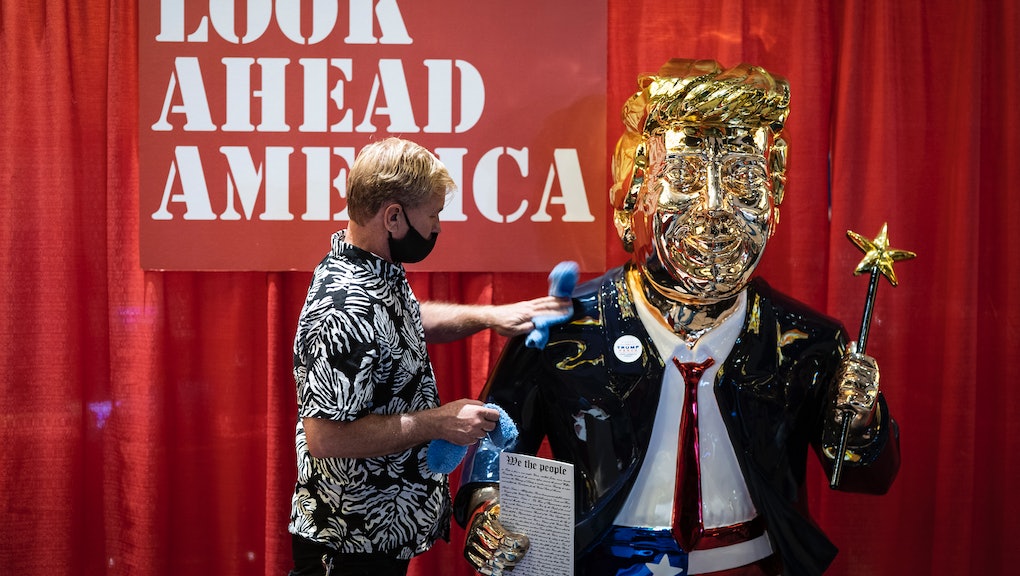 CPAC, the annual Conservative Political Action Conference, occupies a strange place in the national zeitgeist: It's a three ring circus of grifters, shameless self-promotors, and various z-list wannabes — while simultaneously featuring the most unambiguously destructive, harmful, and deeply bigoted powerhouses of the American right.

That dual dynamic was on full display this year, as CPAC 2021 was defined as much by bizarre and appalling optics as it was by the unabashed embrace of White Nationalism and conspiracy-mongering that's come to define the post-Trump GOP as a whole. Which brings me to the stage.

As multiple people noted during this year's semi-socially distanced conference, the conference stage — the one upon which Ted Cruz screamed like a maniac and former President Donald Trump rambled about...well, a lot of stuff — happened to look conspicuously like a notorious, if slightly less universally known Nazi symbol: the Odal Rune.

The resemblance, down to the serif "wings" that matched the runes worn by members of the Nazi S.S., was the sort of thing that, under "normal" circumstances (whatever those are) could have probably gone relatively unnoticed — or at least without inspiring the sort of widespread outrage that followed. Matt Schlapp, chair of the American Conservative Union (which organizes CPAC), emphatically denied any bigoted intent with the state's design. "Stage design conspiracies are outrageous and slanderous," he wrote on Twitter. "We have a long standing commitment to the Jewish community. Cancel culture extremists must address antisemitism within their own ranks. CPAC proudly stands with our Jewish allies, including those speaking from this stage."

But the furor around the runic similarity was enough to raise red flags for the Hyatt hotel chain hosting the event. In a statement following an outpouring of criticism and boycott threats, Hyatt's corporate leadership quickly distanced themselves from CPAC and its conspicuously fascist imagery.

"We take the concern raised about the prospect of symbols of hate being included in the stage design at CPAC 2021 very seriously as all such symbols are abhorrent and unequivocally counter to our values as a company," the company said in a statement, stressing that the ACU was responsible for the stage design. "We discussed directly with ACU leadership who told us that any resemblance to a symbol of hate is unintentional. We will continue to stay in dialogue with event organizers regarding our deep concerns. Any further questions can be directed to CPAC."

Milquetoast statement aside (under threat of death, I don't think I could tell you what being "in dialogue...regarding our deep concerns" actually means) this whole issue of whether or not CPAC knowingly utilized Nazi symbology as a hat-tip to the increasingly racist, fascistic conservative base gets two painful truths:

1) The only reason people care about the use of the Odal rune is because the GOP — particularly under former President Trump — has repeatedly and shamelessly pushed out "coincidental" racist shibboleths that, at a certain point, a casual observer is simply under no obligation to give them the benefit of the doubt.

2) This controversy obscures the more immediate truth of CPAC — that the conference enthusiastically featured a laundry list of actual racists, conspiracy theorists, and seditionists. And in that sense, piling on over the use of an overt, albeit not widely known, fascist symbol is actually counterproductive in acknowledging the very real dangers presented by those invited on stage and allowed to advance their bigoted screeds and agendas.

Consider Arizona Republican Rep. Paul Gosar, who skipped a House vote to speak at the overtly White Nationalist America First Political Action Committee (AFPAC) conference just one night before taking the stage at CPAC to discuss the "devaluing of American citizenship." There were also appearances by serial fabulist Rep. Madison Cawthorn, whose campaign claimed Sen. Cory Booker "aims to ruin white males running for office (his campaign later blamed a staffer for the "syntax error"), school shooting truther Wayne Dupree, and ultimately, former President Trump himself — a man at the epicenter of a radiating wave of bigotry and unhinged conspiracy theorizing whose mere presence at CPAC raised the specter of divine retribution.

And those were just the scheduled presenters. The crowd included the sort of people who booed requests to wear masks, and opted to stand in line for the chance to meet seditionist lunatic Marjorie Taylor Greene:

If you're going to criticize CPAC for something, the (sincerely alarming) optics of a Nazi symbol should take a back seat to the actual platforming of the sort of dangerous figures who have reportedly left actual bodies in their wake. Otherwise, you're just falling for the same trap the Trump administration helped perfect over the past four years: waving a tree in your face in the hopes that you forget there's an entire forest to worry about instead.

More like this
The Supreme Court unanimously reminds cops to get a friggin' warrant first
By Rafi Schwartz
A Philly foster agency can continue discriminating against LGBTQ families, SCOTUS rules
By Rafi Schwartz
Kamala Harris's trip to Guatemala highlights Biden's impossible task on immigration
By Vanessa Taylor
Stay up to date