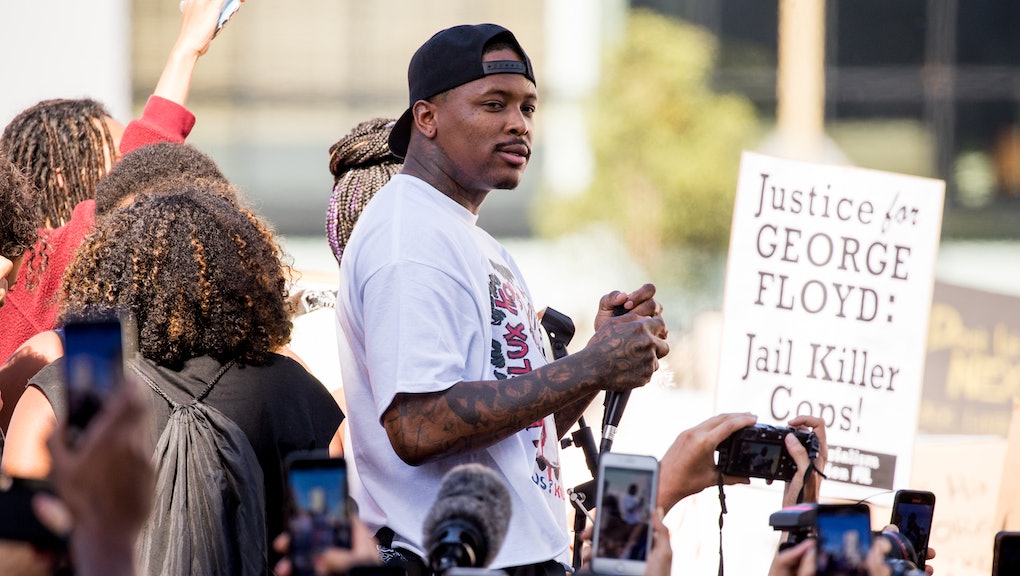 The cathartic words of YG and Nipsey Hussle rang out from sea to shining sea after Joe Biden won the presidential race. “Fuck Donald Trump,” millions of relieved Americans chanted while publicly and privately celebrating the end of his despotic reign. Notably, the 2016 protest track both predated and foretold the Trump presidency with chilling accuracy. But now, more than four years after its initial release, “FDT” is enjoying a post-election comeback, with streams and sales of the rap song exploding in the last week.

You probably witnessed it firsthand: almost immediately after the election was called in Biden’s favor on Saturday morning, people across the nation began blasting “FDT” from their car speakers, in their living rooms, and on social media. Personally, I probably heard the track 50 times this weekend. And unsurprisingly, all that anecdotal evidence of the song’s sudden popularity translated into impressive gains on the music charts.

As reported by Billboard, sales of “FDT” jumped a whopping 740% between November 6 and November 7. The song was downloaded 3,000 times on Saturday, according to initial sales reports to Nielsen Music/MRC Data. Since relatively few people buy music anymore, tons of people opted to stream “FDT” instead. It was the seventh most popular song on Saturday, according to Alpha Data and Rolling Stone, with 2.3 million on-demand audio and video streams, working out to a 489% increase from the day before.

In case this weekend was the first time “FDT” entered your consciousness, here’s a bit of a refresher on its origins. Compton rapper YG initially dropped the tune in March 2016, a full two months before Trump became the presumptive Republican presidential nominee that May. It became that summer’s most rousing protest anthem, but “FDT” topped out at Number 10 on Billboard’s Bubbling Under Hot 100 singles chart.

The rousing, impassioned track caught the attention of the feds, however. “The Secret Service started calling in about the song when it got released,” YG told Rolling Stone in September 2016. He noted one line drew their ire the most: “All the n*ggas in the hood wanna fight you / I’m surprised El Chapo ain’t tried to snipe you.”

While “FDT” was far-and-away the song of the weekend, it’s hardly the only older track to chart in the wake of Trump’s defeat. Americans celebrated to the likes of NSYNC’s “Bye Bye Bye,” which re-entered the Top 200 on U.S. iTunes on Saturday, and Miley Cyrus’s “Party in the U.S.A.,” which cracked the iTunes Top 40.

In stark contrast to the Trump campaign, which was smacked by a number of cease-and-desist orders from musicians objecting to the use of their songs at events, the Biden camp unleashed a flurry of celebratory tracks throughout its victory celebration on Saturday night. As a result, lots of those older tunes are now charting, as well. Kamala Harris took the stage to Mary J. Blige’s “Work That” from 2007; after the event the song climbed into the Top 20 on U.S. iTunes. Similarly, Coldplay’s “A Sky Full of Stars” — played during Saturday night’s fireworks display — made it into the iTunes Top 10. Other winners include Kygo and Whitney Houston’s “Higher Love,” Tom Petty’s “I Won’t Back Down,” and Daryl Hall & John Oates’ “You Make My Dreams.”

What this all boils down to, of course, is that Americans were clearly in need of release after an anxiety-ridden, drawn-out election that was coupled with a crippling pandemic and social unrest. And how did the electorate blow off steam? By dancing in the streets, from coast to coast, to utterly jubilant music. It was a beautiful sight to behold.

More like this
“Exhilarating, joyful, and of course pretty scary": Musicians on the pressures of returning to the stage
By Kelly McClure
The all-Black Bill Pickett Invitational Rodeo will air on national TV for the first time ever this Juneteenth
By Jewel Wicker
'Starstruck' will melt your icy heart and make you believe in love again
By Kara Weisenstein
Stay up to date