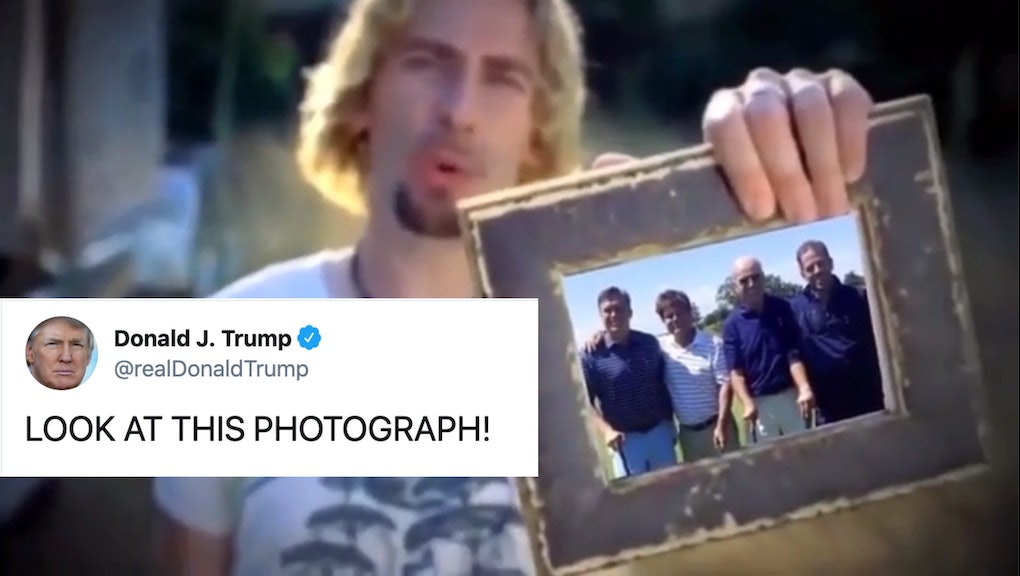 Trump's Nickelback video was deleted for copyright infringement, but we can't unsee it

As if the Trump nightmare couldn't get any worse, the president has dragged Nickelback — the band America loves to hate — into his impeachment scandal.

On Wednesday, Trump tweeted a meme doctoring the music video for Nickelback’s 2005 song “Photograph” to make it look like singer Chad Kroeger is holding a picture of Joe Biden and his son Hunter golfing with a Ukrainian gas executive. Trump’s efforts to bribe Ukranian president Zelensky for dirt on Biden are now at the center of the impeachment inquiry against him.

In a very 2019 turn of events, however, less than 12 hours after Trump posted the video, Twitter removed it, citing copyright infringement. It seems Nickelback noticed their… erm... jam was being used to further the president’s political agenda and filed a complaint. You can still watch the video on YouTube, however.

As The Guardian pointed out, this isn’t the first time Trump has gotten in trouble with Twitter for copyright violations. This April, he posted a campaign ad scored to Hans Zimmer music from The Dark Knight Rises — a film that has some pretty dark connotations, actually, since a gunman espousing far-right ideology attacked a screening of the film in Aurora, Colorado, in 2012, killing 12 people. Warner Brothers took legal action, and Twitter removed the video.

Trump trying to harness pop culture to further his political agenda is a bizarre strategy considering how few people in the entertainment industry support him. Remember all of the musicians who refused to perform at Trump’s inauguration? But Trump has never been one for acting rationally online, and the videos he's posted to his Twitter account since the impeachment inquiries began are only evidence of an increasing desperation.

But back to this Nickelback video. Apparently it isn’t enough for Trump to make us dwell on your inane tweets about alligator-filled “Moots?” or vague threats to “shoot migrants in the legs” to slow them down. He also needs to remind us of terrible alt-rock from the 2000s.

More like this
SCOTUS just dealt a unanimous blow to the NCAA over student-athlete compensation
By Rafi Schwartz
The all-Black Bill Pickett Invitational Rodeo will air on national TV for the first time ever this Juneteenth
By Jewel Wicker
“Exhilarating, joyful, and of course pretty scary": Musicians on the pressures of returning to the stage
By Kelly McClure
Stay up to date