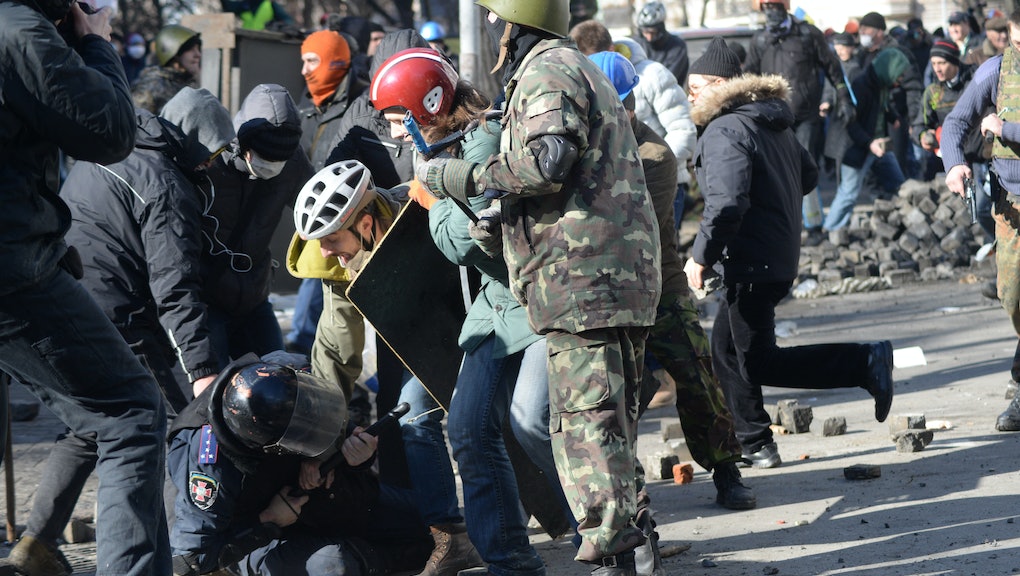 Trump's re-election team used a 2014 photo of Ukraine instead of the U.S. in a Facebook ad

You might think that after being impeached for trying to strong-arm Ukrainian President Volodymyr Zelensky into interfering in the upcoming 2020 presidential election, President Trump and his associates would have the good sense — or at least the common sense — to stay far away from anything Ukraine-related for the remainder of his term in office.

You might think that, but unfortunately (if predictably) you'd be extremely wrong.

This week Trump and his re-election team find themselves in another Ukraine scandal — one that doesn't threaten his presidency, so much as it highlights how embarrassingly flimsy his campaign's message of "law and order" truly is, as well as how gullible he hopes his supporters are.

Like so much political stupidity these days, this all comes down to Facebook, where the president's re-election campaign has been running a series of ads claiming Trump represents "public safety" and suggesting that should he lose in November, there would be "chaos and violence" — an insinuation backed up by a photograph of protesters beating a riot gear-clad police officer as he curls on the ground.

But look closer, and you might notice something a little ... off about the police officer being beaten. Like, for instance, the fact that his shoulder patch isn't in English, and seems to be a Ukrainian military symbol. That's because the picture isn't from any of the recent protests in Portland, New York, Minneapolis, or any other major American city. It was taken in Ukraine, two years before Trump was even elected president.

"Photography has always been used to manipulate public opinion," photographer Mstyslav Chernov told Business Insider, confirming that the picture is indeed his and was taken in the days preceding Russia's annexation of Ukraine's Crimea region in 2014.

"With the rise of social media and the rise of populism, this is happening even more," Chernov added.

Chernov's original photograph was uploaded to Wikimedia Commons under the Creative Commons Attribution-Share Alike 3.0 Unported license, which requires anyone using the picture to give full credit to the photographer, as we have here. Nowhere on the Trump campaign's ad is Chernov given credit for his work.

According to Facebook data, the now-inactive ad began running on July 21, with the potential to reach up to 1 million users in Wisconsin, Pennsylvania, Georgia, New Mexico, and Colorado. It ultimately was seen by less than a thousand people.