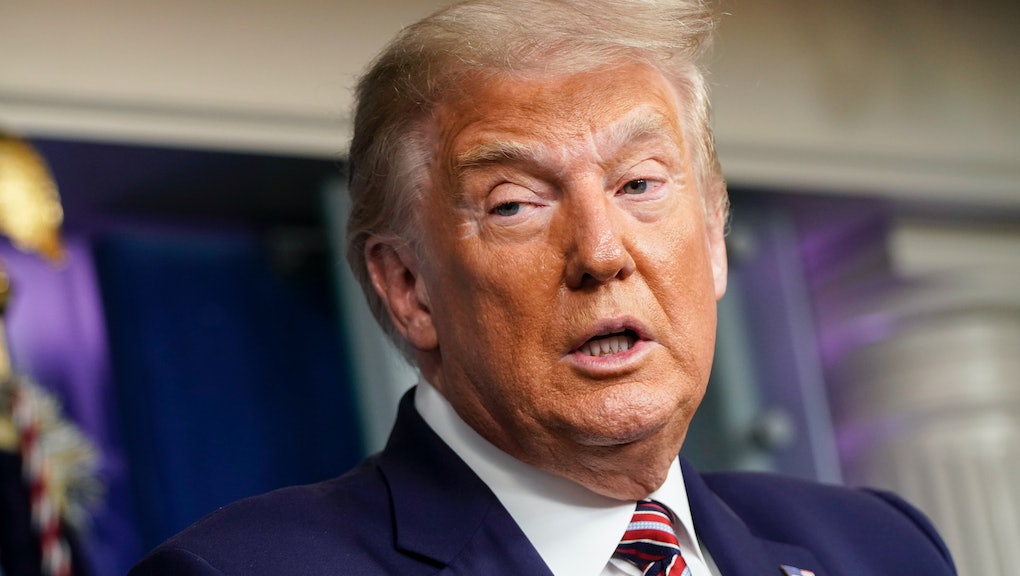 Trump's tax return information was obtained by The New York Times. Here are 5 things we learned

For years, President Trump's tax returns have been the topic of interest. Trump has done all he can to keep these records out of the hands of investigators and away from the eyes of the general public. But over the weekend, The New York Times published a detailed report of Trump's tax contributions from the past 20 years.

Earlier this summer, the Supreme Court ruled that Trump cannot keep his tax records from Manhattan District Attorney Cy Vance. Going to the Supreme Court was Trump's last bid for secrecy. While the court's ruling didn't mean Trump had to reveal his tax returns to the public, the decision is partly out of his hands now.

The Times reported that it received tax return data on both Trump and his companies. The outlet noted that Trump's refusal to release this information on his own made him the first president in decades who hid "basic details about his finances."

In response, Trump took to Twitter to bash the report, writing, "The fake news media, just like election time 2016, is bringing up my taxes and all sorts of other nonsense with illegally obtained information and only bad intent. I paid many millions of dollars in taxes but was entitled, like everyone else, to depreciation and tax credits ... "

While Trump claims he's paid millions in taxes, the Times's report says that's not quite true. Here are five of the biggest takeaways from the Times's bombshell of a report.

You would think that someone with a net worth of $2.5 billion would contribute a decent amount to federal income taxes. Think again.

The Times found that Trump didn't pay any federal income taxes in 11 of the eighteen years that the outlet examined.

But, that may not be the worst part.

When Trump did start paying federal income taxes, it was probably less than you paid

Per the Times's data, Trump paid federal income taxes for the first time in 2017 after he became president ... and he only paid $750.

This point drew a public response from Representative Alexandria Ocasio-Cortez (D-N.Y.), who has often been on the receiving end of Trump's insults. She tweeted, "In 2016 and ‘17, I paid thousands of dollars a year in taxes *as a bartender.* Trump paid $750."

"He contributed less to funding our communities than waitresses & undocumented immigrants," Ocasio-Cortez continued. "Donald Trump has never cared for our country more than he cares for himself. A walking scam."

Trump's golf courses are bleeding money ... but he's using that to his advantage

Trump takes a lot of pride in his golf courses. But they don't seem to be drawing in big money. Trump has lost $315.6 million since 2000 from the 15 golf courses he owns across the world.

This isn't limited to Trump's golf courses alone. The Times reported that many of his signature businesses are losing large amounts of money. However, the outlet reported these loses "have helped him to lower his taxes."

In other words: Trump's businesses have been failures, on the whole. And he's used that failure to skimp on his taxes.

Yep, Trump claimed $70,000 in hairstyling for television for a tax deduction.

In addition, nine of his companies paid $95,464 for styling Ivanka Trump's hair and filed those payments as expenses.

He's under audit for $72.9 million refund

With this report out, it's easy to see why Trump fought so long and hard to keep his tax records a secret. The report's revelations have drawn intense criticism from a number of Democrats.

On Twitter, Rashida Tlaib (D-Mich.) didn't bother to mince words, writing, "[Trump's] a walking conflict of interest, a fraud, and a financial failure."

More like this
Guess how much Trump's companies made during his presidency!
By Rafi Schwartz
Toyota: Our bad, we'll stop donating to the Republicans who encouraged the coup
By Rafi Schwartz
The Frito-Lay workers' strike has revealed some horrifying working conditions
By Vanessa Taylor
Stay up to date