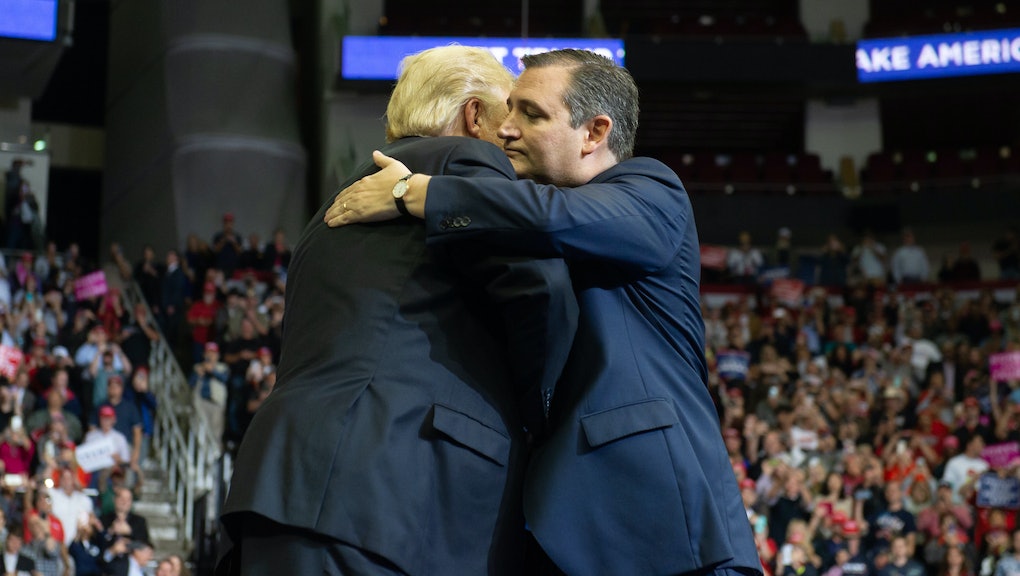 At a hastily-called press conference Wednesday, President Trump surprised observers by announcing that not one, but three sitting Republican senators had been added to his shortlist of potential Supreme Court nominees.

In addition to naming Sen. Tom Cotton of Arkansas and Missouri's Josh Hawley as judicial prospects, Trump also included Texas Sen. Ted Cruz — a man he once called "a total hypocrite and, until recently, a Canadian citizen who may not even have a legal right to run for president" — as one of the nearly two dozen additions to his previously released list of potential justices.

Trump's largely unexpected SCOTUS update came as he ramps up his effort to animate his supporters by framing the upcoming presidential election as an opportunity to continue packing the court with far-right conservative legal figures — among whom Cruz, Hawley, and Cotton, who recently proposed sending U.S. troops into cities to quell the ongoing Black Lives Matter social justice protests, would fit in comfortably.

Trump had, in fact, telegraphed Wednesday's announcement several months ago, tweeting in July that "this list is more important than ever before."

It is unclear why the president's stated announcement date of Sept. 1 was pushed back to Wednesday, but politics junkies might have a theory. Trump's press conference came crashing into an already overcrowded news cycle, in which excerpts from journalist Bob Woodward's forthcoming book on the White House — particularly its documented lies about the ongoing coronavirus pandemic — as well as a new whistleblower report alleging Department of Homeland Security officials had modified intelligence reports to better suit the president's ideology, each threatened to dominate the day's headlines.

Cruz, who once called Trump "a sniveling coward," has previously stated that joining the Supreme Court was "not a desire of my heart." Hawley echoed Cruz's previous demurral Wednesday, saying he had "no interest" in the bench.

Cotton, however, did not outright reject the prospect of becoming a Supreme Court justice, saying in a statement that he was "honored" to be included on the list, and that "I will always heed the call of service to our nation."