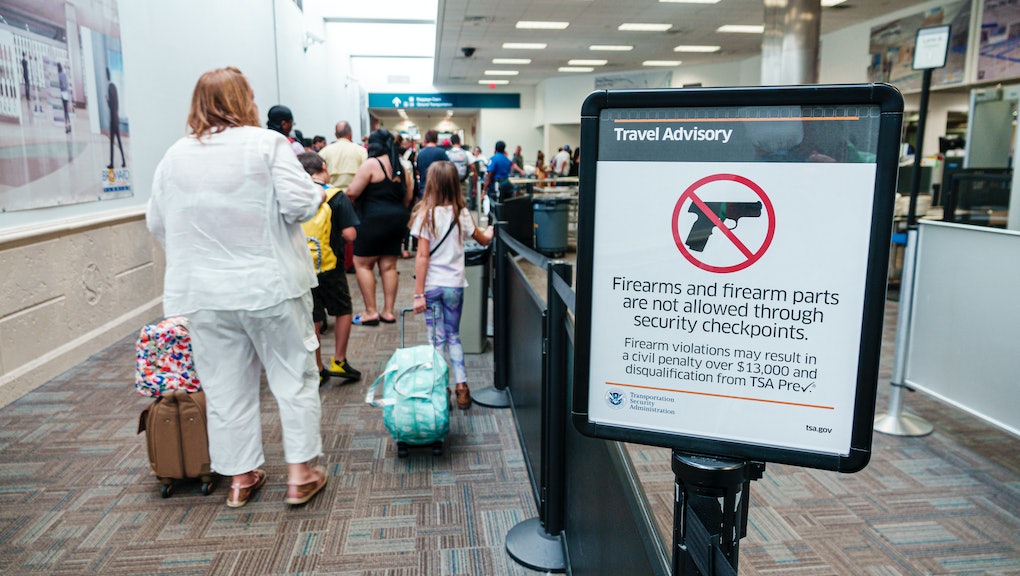 TSA is detecting more guns at airport checkpoints, even though air travel has plummeted

Not that many people are flying right now since they’re presumably trying to protect themselves and each other by staying out of tiny, confined spaces as much as possible. But contracting coronavirus and pricey snacks aren’t the only things you need to worry about in airports anymore. According to a report issued this morning by the Transportation Security Administration (TSA), more people than ever are trying to carry guns on airplanes.

The TSA reported that they found three times as many guns in carry-ons this July than during July 2019, despite the fact that passenger volume is significantly lower. There were a quarter of the number of passengers this July, but a much higher gun-per-passenger ratio. Last July, TSA officers found about 5 guns for every million passengers they screened, but this year, they found more than 15 guns for every million people screened, USA Today reported.

As if it wasn’t concerning enough that people carrying more firearms in airports during the pandemic, it also turns out that most of those guns are, in fact, loaded. Eighty percent of the guns that TSA found on passengers were loaded, reported USA Today. The TSA is concerned, to put it lightly. “As hard as we are working to mitigate other risks at this time, no one should be introducing new ones,” TSA Administrator David Pekoske said in the report.

Just to clarify: It is extremely illegal to carry a weapon — loaded or unloaded — through the security check. The TSA is not playing around about this. “Travelers need to know that if they bring a gun to the security checkpoint, regardless of whether it is in a handbag, knapsack, roller-bag or strapped to their belt, it will be an inconvenient and expensive mistake on their part,” Pekoske said in the report.

You can actually transport a firearm when you fly, but the rules are complicated, and you can only pack a firearm in checked baggage. The fines are steep if you try to bypass TSA regulations. For being caught with an unloaded firearm, they start at $2,050. And for a loaded gun, they start at $4,100. If you rack up multiple violations, you can accrue more than $10k in fines in one carry-on. You can also have trusted traveler status and TSA PreCheck™ expedited screening benefits revoked, which is a big deal for folx who travel frequently.

I once had a belt buckle shaped like a pistol confiscated at the Vegas airport. I was pissed at the time — seriously, it was clearly a cartoonish fashion accessory — but I can tell you from personal experience that getting caught with something that even resembles a firearm at an airport is pretty terrifying. If you think the side-eye you get when they take away your shampoo is bad, wait til you see what happens when you’re packing heat instead of Prell. Also, I don’t know who needs to hear this, but carrying weapons is a terrible way to make friends.