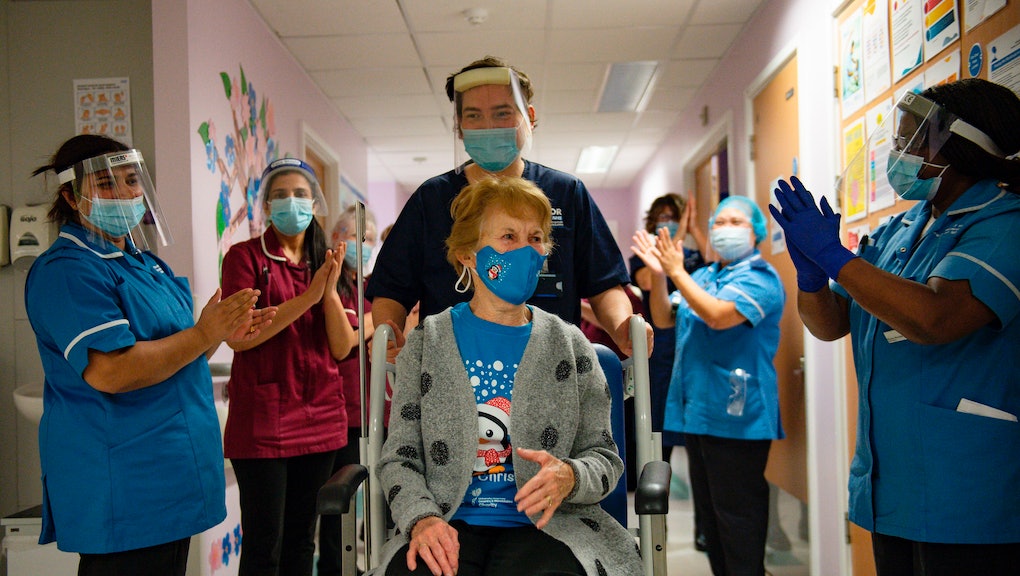 As we move into the darkest days of winter — and of the pandemic — there’s hope on the horizon. A 90-year-old woman in the U.K. was the first person to receive Pfizer’s vaccine for COVID-19, prompting officials and press to dub today COVID-19 “V-Day,” CBS reported. Here’s everything you need to know about what this vaccination means for all of us.

Britain is the first Western country to roll out a COVID-19 vaccine, and the first person who received it is a 90-year-old grandmother named Margaret Keenan who lives in Coventry. Keenan’s birthday is next week, and she is hoping that this vaccination makes her 91st trip around the sun a little less lonely. "It's the best early birthday present I could wish for because it means I can finally look forward to spending time with my family and friends in the New Year after being on my own for most of the year," Keenan told CBS. I’m not crying, you’re crying.

To be fair, while Britain is claiming first place in the vaccine race in the press, it is not actually the first country to begin vaccinating. Russia started vaccinating people in Moscow on Saturday with its Sputnik V vaccine, but the Russian program is being viewed with some skepticism because the Sputnik 5 vaccine never finished clinical trials, reported CBS. The vaccine that the U.K. used is the Pfizer vaccine that the U.S. FDA announced this morning is safe and effective.

On Thursday, advisors to the FDA are scheduled to meet to decide whether this Pfizer vaccine warrants immediate use approval, The Washington Post reported. No one can say for sure what will happen in that meeting, but some are predicting that the vaccine will be approved in the U.S. within days and that we could see vaccines begin in the U.S. by next week.

While this is definitely a hopeful moment, it should be noted that there are still significant hurdles to getting people vaccinated. The U.K. currently only has 800,000 of the 25 million doses it needs, and while the first shipment of Pfizer doses in the U.S. is expected to contain 6.4 million doses, there are 20 million healthcare workers in the American population, not to mention the other 310 million of us, according to The Washington Post.

British officials have made it clear that vaccination is not mandatory, but the first doses will be offered to those at highest risk for severe illness starting with the oldest people. Initial doses of the Pfizer vaccine in the U.S. will be sent to five federal agencies — the Bureau of Prisons, the Defense and State departments, Indian Health Service and the Veterans Health Administration, The Washington Post reported. Let’s hope and pray — and call our governor’s offices to demand — that the vaccine makes it first to the people who need it most.

More like this
COVID-19 vaccine drug interactions: Is there anything I should avoid?
By Joseph Lamour
Why Johnson & Johnson vaccine sites in 3 states have been shut down
By Tracey Anne Duncan
One third of COVID-19 survivors end up with mental health issues, says a new study
By Melissa Pandika
Stay up to date