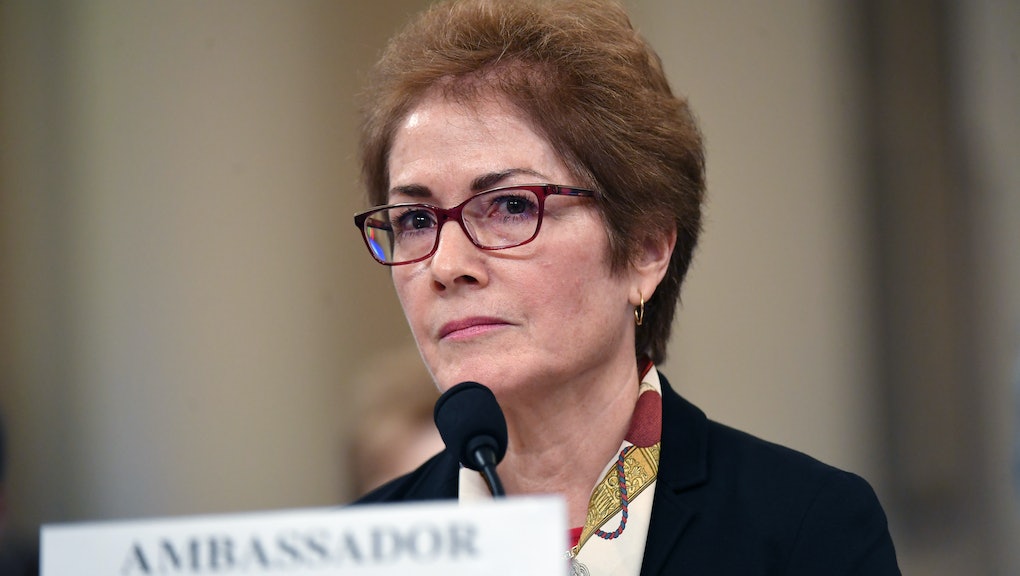 Ukraine has launched an investigation to determine whether U.S. Ambassador Marie Yovanovitch was under surveillance before she was fired by President Trump. Ukraine’s Interior Ministry announced Thursday that Ukraine's police would be investigating some of Trump’s associates, according to CNN. The probe was prompted by text messages released by House Democrats on Tuesday showing Robert Hyde, a Trump supporter who's running a longshot Republican congressional campaign in Connecticut, criticizing Yovanovitch and suggesting that he or someone else may have been spying on her.

Hyde was conversing with Lev Parnas, a former associate of Rudy Giuliani, who serves as Trump's personal lawyer. The messages were exchanged in March 2019 and Yovanovitch was recalled from Kiev two months later.

"Wow. Can't believe [Trump] hasn't fired this bitch. I'll get right [on] that," Hyde wrote, referring to Yovanovitch, according to NPR. "[She's] under heavy protection outside Kiev." Hyde later told Parnas that he had some associates in Ukraine who were willing to trail the ambassador.

“They are willing to help if we/you would like a price ... Guess you can do anything in the Ukraine with money ... what I was told,” he stated.

During an interview Wednesday night with MSNBC's Rachel Maddow, Parnas said he didn’t take the messages seriously. Hyde also denied that he was serious and said he was “absolutely not” spying on Yovanovitch during an interview with Eric Bolling, per The New York Times. He had previously told NBC News's Josh Lederman that he'd sent the texts after he'd "had a few drinks" and that they were nothing to be taken seriously.

"Ukraine's position is not to interfere in the domestic affairs of the United States of America. However, the published records contain the fact of possible violation of the legislation of Ukraine and the Vienna Convention on Diplomatic Relations, which protects the rights of a diplomat in the territory of another country," the Ukraine Interior Ministry said in a statement.

The ministry added, “Ukraine cannot ignore such illegal activities on its territory. After analyzing these materials, the National Police of Ukraine upon their publication started criminal proceedings."

This probe is latest in a string of investigations that have plagued the troubled Trump administration. A list created by the Times showed there were 30 open investigations related to the president in September. A guide compiled by Bloomberg in December broke down the biggest investigations against Trump and his minions, naming 12.

Yovanovitch called for an investigation immediately after Parnas's documents were released, calling the possibility that she'd been watched “disturbing.” Lawrence S. Robbins, her lawyer, also released a statement about the matter.

"Needless to say, the notion that American citizens and others were monitoring Ambassador Yovanovitch's movements for unknown purposes is disturbing," said Robbins. "We trust that the appropriate authorities will conduct an investigation to determine what happened."

More like this
Rudy Giuliani's entourage is shrinking, but his bills are not
By Rafi Schwartz
Trump is having his best week since leaving the White House
By Rafi Schwartz
Americans are feeling something weird and unfamiliar: optimism
By AJ Dellinger
Stay up to date