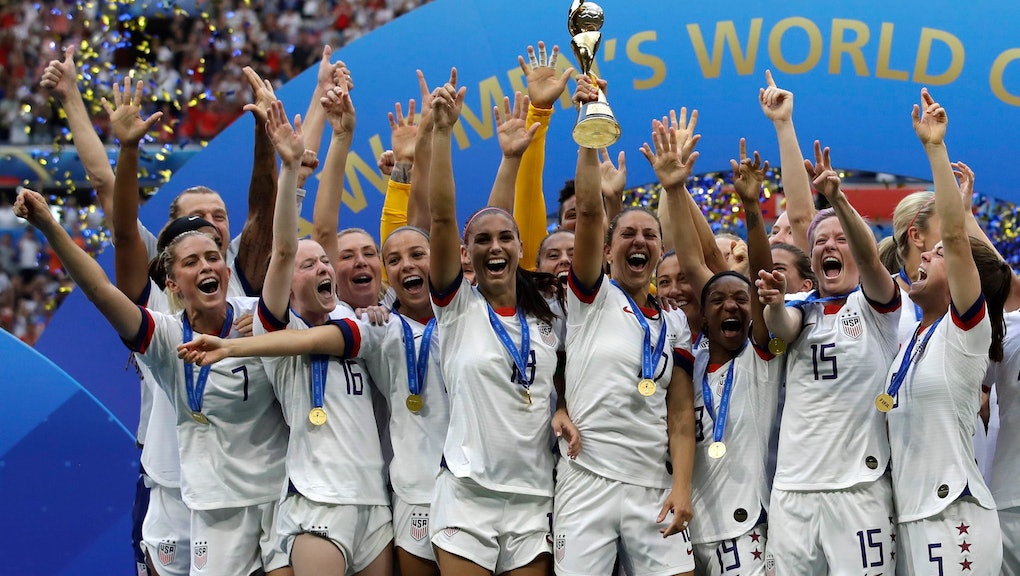 On Sunday, July 7, the U.S. Women's National Team (WNT) made history when they won their fourth FIFA Women's World Cup title. As all 23 players spilled onto the field to celebrate, the stadium in Lyon, France began a collective chant, but it wasn't "USA" — it was "Equal Pay!" That's because, despite having more trophies, championships, star players, and generated revenue than the Men's National Team (MNT), the women make far less money and are suing for the difference. So after a summer away in France, what's next for the WNT in the fight for equal pay?

While the WNT was winning their way through the World Cup — theatrical celebration and all — they were also in the middle of a lawsuit alleging gender discrimination against the United States Soccer Federation (USSF). The suit was filed by 28 current and former members of the WNT who played for the 2015 team. According to the documents filed and made available by the New York Times, the WNT made roughly 38% of what the MNT made, after factoring in salaries and bonuses, despite the fact that the WNT brings in more revenue for the USSF. According to CNBC, the women's games generated $50.8 million in revenue between 2016 and 2018, while men's games made $49.9 million.

When the WNT returns stateside on Monday, they'll be greeted with a ticker tape parade in New York City. They'll also enter into mediation with the USSF about being paid fairly for their contributions to U.S. soccer. They'll likely have the upper hand, as beyond the trophies and the moral argument for gender equality, the women have a lot going for them.

First, the method for achieving fair pay that they're suggesting is perfectly reasonable. The Women's National Team Players Association (WNTPA) are asking for a "market realities" revenue sharing model to be implemented by the USSF. According to that model, "player compensation would increase in years in which the USSF derived more revenue from WNT activities and player compensation would be less if revenue from those activities decreased," as said in the lawsuit.

It's a proposal that asks for players from the WNT and MNT to be compensated fairly for their performance and paid from the revenue they create for the federation. Not only is it a financially sound pitch, it's also supported by the MNT. The men's team issued a statement of support for the plan that said the group "fully supports the efforts of the U.S. Women's National Team Players to achieve equal pay," and that they are "committed to the concept of a revenue-sharing model to address the U.S. Soccer Federation's 'market realities' and find a way towards fair compensation."

The MNT isn't the WNT's only supporters. Millions of fans, including Sen. Elizabeth Warren, Rep. Alexandria Ocasio-Cortez, and even Snoop Dogg, are all advocating for the team's fair compensation. “Pay them ladies man, pay them girls what they’re worth," Snoop Dogg said in an Instagram. "The women should be getting $500,000 per athlete, Snoop Dogg says so."

Just days before the team brought home their fourth World Cup Win, 50 members of Congress signed a letter address the to the head of the USSF, condemning the federation for underpaying the WNT. The letter stated that the USSF "should work to correct course so that the only thing women athletes are fighting for is the world title or a gold medal. Instead, the message sent to women and girls is that their skills and accomplishments are of lesser value."

Countless people, from advertisers to politicians to fans, are in support of the WNT's lawsuit for to end the gender discrimination within the USSF. But while the team is battling for fair compensation at the national level, the fight highlights the pay disparity across the board for female athletes. Across the world, women's leagues are systematically underfunded, and the players are dramatically underpaid compared to the men's teams. That may be slowly changing, as more countries begin to invest in developing their women's leagues, but the financial disparities are still extreme.

Just take the infuriatingly large difference between the prize money for the World Cup. In 2018, the Men's World Cup winner, France, was awarded $400 million in prize money, but this year, the women of the the U.S. team only received $30 million for accomplishing the same feat in the Women's World Cup. The 2019 event brought in one billion viewers, according to NBC News. As Maggie Mertens wrote for The Atlantic, "If this tournament has proved anything, it’s that women’s soccer is not a sideshow and has vast moneymaking potential."

People are tuning to women's matches, they're buying tickets for to these games, and they're spending money on merch. Beyond the moral argument for equality, it just makes sense that women soccer players need to be paid better.

The WNT shouldn't have to be the best in the world for their value to be recognized, but as they are coming to the mediation table as four-time world champions, the USSF doesn't have much of a case against giving them what they're rightfully owed.

More like this
Watch GOP Gov. Jim Justice fully combust when asked why he signed a transphobic bill
By Rafi Schwartz
FEMA said it would reimburse cities for housing homeless people. Most cities ignored the offer
By AJ Dellinger
"Radical love in action": How organizers supported vulnerable Muslim communities during Ramadan
By Vanessa Taylor
Stay up to date