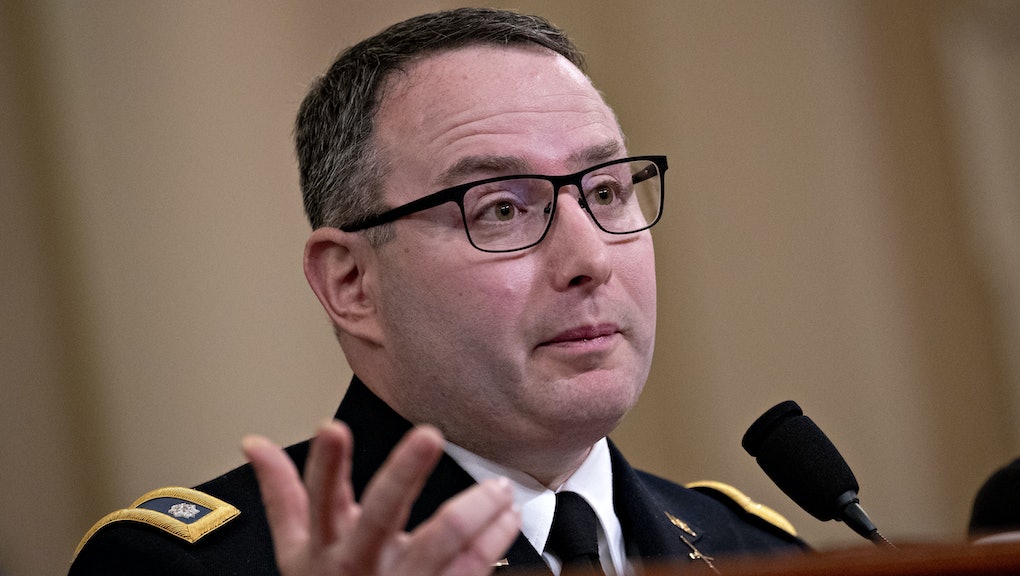 Army Lt. Col. Alexander Vindman made an indelible impression on the American public during his open testimony in front of the House Intelligence Committee on Tuesday. Vindman stated that he reported the content of President Trump’s July 25 call with Ukrainian President Volodymyr Zelensky “out of a sense of duty” and that he is not afraid of any consequences related to his testimony. During the hearing, Vindman admitted he "was concerned" about the call, which has been pinpointed in the ongoing impeachment inquiry into Trump.

“What I heard was improper, and I reported my concerns to Mr. [John] Eisenberg,” the White House's top lawyer for national security issues, Vindman said during his opening statement. “It is improper for the president of the United States to demand a foreign government investigate a U.S. citizen and political opponent.”

He also expressed concern about how an investigation of Vice President Joe Biden and his son Hunter, as Trump reportedly requested, “would be interpreted as a partisan play.” He added that “this would undoubtedly result in Ukraine losing bipartisan support, undermine U.S. national security and advance Russia’s strategic objectives in the region.”

The son of a Russian immigrant who left the Soviet Union, Vindman acknowledged that his honesty Tuesday would not be well-received in the homeland his father fled.

“In Russia, my act of expressing my concerns to the chain of command in an official and private channel would have severe personal and professional repercussions and offering public testimony involving the President would surely cost me my life,” he said.

He ended his opening statement with a message to his father. “Dad, my sitting here today, in the U.S. Capitol talking to our elected officials is proof that you made the right decision forty years ago to leave the Soviet Union and come here to United States of America in search of a better life for our family,” Vindman said.

Powerfully, he concluded: “Do not worry, I will be fine for telling the truth.

Vindman’s closing remarks endeared him to viewers, if social media is any indication. Moreover, the personal tinge to his testimony, coupled with his Army background and firsthand knowledge of the Trump-Zelensky call, had previously baited Republicans into smearing the man rather than his statements — something that made Vindman an additionally sympathetic figure.

The elder Vindman can rest easy because Army spokeswoman Col. Kathy Turner confirmed that Vindman will receive support should his testimony bring with it any risks, per ABC News. "The Army is providing supportive assistance to help Lt. Col. Vindman with the public attention," Turner said in a statement.

"As a matter of practice, the Army would neither confirm nor deny any safety or security measures taken on behalf of an individual; however, as we would with any Soldier, the Army will work with civilian authorities to ensure that he and his family are properly protected.”

More like this
Should public transit be free?
By Andy Crump
Andrew Cuomo sexually harassed multiple women, attorney general investigation finds
By AJ Dellinger
Arkansas's governor is very sorry he engineered a COVID surge in his state
By Rafi Schwartz
Stay up to date