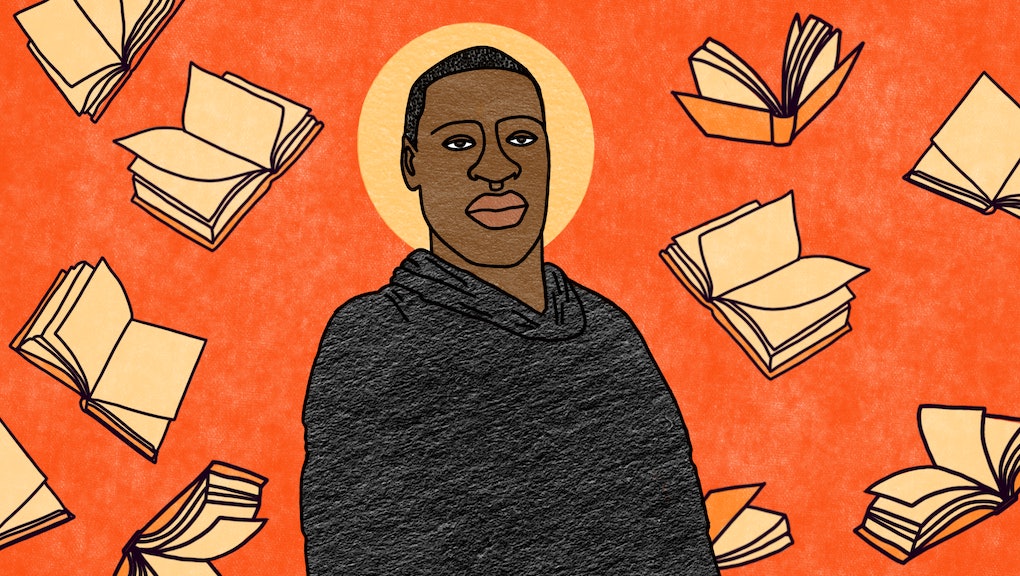 One year ago today, George Floyd was murdered by Minneapolis police officer Derek Chauvin. Time hasn’t dulled the terror of watching the now-infamous civilian video capturing Floyd’s last moments, and it never should. While hellish cases of police brutality like his happened entirely too often in the U.S., Floyd’s was unique in that it led to an actual indictment; the case and this past year’s protests will inevitably be covered in books, documentaries, and school history curricula forever.

But what will these stories outline? Will they claim that Floyd “sacrificed” his life for justice, as Speaker of the House Nancy Pelosi said in her first public statement following the conviction of his murderer? Floyd didn’t choose to die that day, and regardless of her intention, this mischaracterization of his death is now a very real part of the story. Historical literature — especially when written by someone from outside the community — tends to reshape and romanticize events surrounding Black people either through a lens of innocence, ignorance, or the need to sugar coat the uncomfortable parts of reality.

And that’s more dangerous than it sounds because blurring the truth about violence against Black Americans such as Floyd inevitably leads to history repeating itself. So, how do we — and I mean, everyone, regardless of their race — help prevent the inaccurate portrayals of Floyd's death from becoming part of the historical record?

First things first, let’s acknowledge how stories about Black people get massaged into lies. Texas textbooks (quite recently, actually) used to teach students that enslaved Africans were simply “workers." First off, that word implies that they were paid, and second, it hints at work hours, vacation time, and benefits — and I don’t know about you, but I don’t know any bosses that publicly torture any of their employees when they don’t meet a deadline. Enslaved people were “workers” in a sense, but this extreme understatement exemplifies how critical the the phrasing used to describe events in history truly is.

Describing them inaccurately or in an imprecise way, frankly, spits in the face of those who suffered and persevered. It also dismisses the residual trauma of slavery, as descendants of ensalved people such as myself face sometimes insurmountable challenges through systemic racism and financial inequity. Texas, a state that taught roughly 5 million students that the impetus for the Civil War was not just slavery (even though it was just slavery) is far from the only educator at fault, but they are a repeat offender.

Telling the truth about Floyd and other Black men and women whose lives were snuffed out by law enforcement is especially crucial because there's no set of standards for teaching Black history in America. States are essentially free to teach what they want. Some school districts would rather imagine that slaves were happy than delving into the slightly harsher reality. And truly, this is the case across society: There will always be people who don’t want to face the unpleasant truth.

Knowing that, the current effort to ban critical race theory, the educational practice of interrogating the role of race and racism in our society, from schools seems like the wrong choice. Moreover, African peoples’ part in the slave trade (especially those who fought and resisted) is rarely taught in America, nor is the Tulsa Race Massacre, arguably the worst incident of racial violence in American history. Many Americans, including me, first learned about it through watching HBO’s Watchmen, instead of in our classrooms, which is symptomatic of the larger system at hand: The omission of real history that involves grave injustices toward Black Americans.

Right now, Floyd’s death is at the front of our minds on its one year anniversary — but we can’t let what really happen fade into a convenient or one-dimensional story. Floyd didn’t know four Minneapolis police officers would order him out of his car — one with his gun already drawn — and another would kneel on his neck, suffocating him after 9 minutes and 29 seconds. We may have not known either, if not for the incident getting caught on video by Darnella Frazier, a bystander who later testified at Chauvin’s murder trial. By the next month, her video would be replayed over 1.4 billion times, contradicting the police department’s report that obscured the truth, and that could’ve been what was in our history books, if not for everyday citizens.

It’s safe to say that Chauvin assumed he’d get away with Floyd’s murder — and he almost did. During his trial, the defense team tried to use Floyd’s prior drug use and cardiac health to justify his death. They tried to paint Chauvin as a gallant and strong enforcer of the law, who was just doing his job. We know, in this moment, how skewed that theory is. And we have to figure out how to perpetuate the truth, and not this problematic narrative.

Chauvin could face 75 years in prison, but he’s just one white guy guy who failed at reshaping the story to make the Black man the guilty one and the white guy the hero. There are many that succeed at their attempts. The other three former officers involved — J. Alexander Kueng, Thomas Lane and Tou Thao — who also chose to turn their backs on justice, go on trial next year.

Floyd did not deserve to die. He didn’t choose to die. We can’t let his death be justified. We also can’t let it get Pelosi-style romanticized; Minneapolis mayor Jacob Frey recently tweeted that Floyd’s murder and Chauvin’s conviction “bettered our city.” We can only hope he meant well but this phrasing will ultimately become a part of Floyd’s narrative — that he was a hero who took his charge and changed the world. George Floyd may have wanted to “better a city,” but he probably wanted to be alive to experience it.

So why do authority figures bungle their responses so badly, pushing forth irresponsible narratives? “After the Civil Rights Movement, many public figures and the corporate sector understood they needed to at least appear to have some form of racial solidarity,” says Chenjerai Kumanyika, assistant professor in Rutgers University’s journalism and media studies department and host of Peabody award-winning podcast Uncivil. These comments in solidarity are invoked regardless of what the actual views on race are of the person saying them, he says. Donald Trump even did it in the wake of Floyd’s death despite every action he actually took to the contrary of equality. “Although these figures fall along a spectrum of whether they actually care or not, many still act against our interests knowing they need to perform that racial solidarity,” Kumanyika adds.

So how should we then think, talk, and write about George Floyd? On one hand, we want to be able to uplift the best of what he was and what his life meant to the larger picture of Blacks in America while reckoning with the challenges we still face in the wake of his death.

“We want to create a way to memorize people that can uplift the best of who they are, recognizing that while being able to struggle, fall down or cause harm, think about what they meant,” Kumanyika says. We also need to contextualize his death with the structural problems that led to it, like the fact that he used a counterfeit $20 bill, for instance. Floyd was unemployed because of the pandemic, like so many Americans are still, and in desperation, maybe needed to use that counterfeit bill. Bottom line: Nobody deserves to die over money, drug use, being large and Black, or any other excuse for that matter. So educating children (or anyone) about George Floyd’s life and death means also talking about the societal issues that affected him.

“I think it's necessary to remember that the story of Floyd needs to be told against the panoramic of victims of authority figure-led violence in the United States,” says Samuel Cohn, sociology professor at Texas A&M University and author of All Societies Die: How to Keep Hope Alive. Cohn, who is white, also directs this advice to his fellow white Americans. “We need to look at the discrimination within ourselves — any debating who's respectable and who's not, who deserves a job and who doesn't, who's smart and who's stupid serve to further divide us.”

Thinking critically about the very real lives of Black folk is crucial in getting history right. “The deeper problems—structural racism, police violence, is the task to contend with,” Kumanyika says. “If we lean too much into the details of events in history like Floyd's personal life, we ignore the structural factors surrounding it, and that's not quite right.”

More like this
The S Factor studio is facing allegations of exploitation and racial insensitivity
By Tracey Anne Duncan
A suicide safety plan saved my life. Here's what it looks like, and why it worked
By Kimberly Zapata
How I finally paid off my $10K credit card bill
By Marianne Eloise
Stay up to date