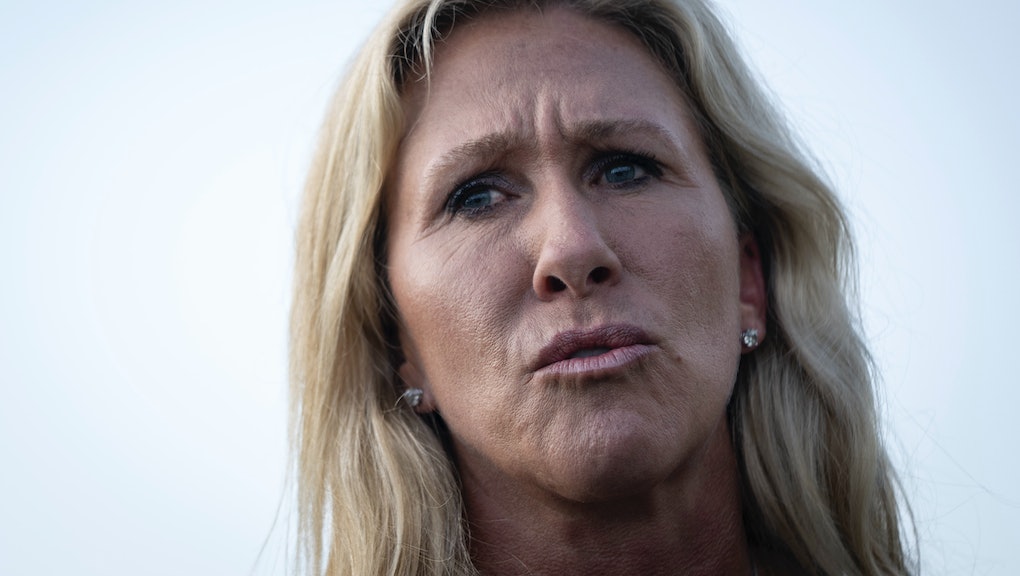 It's been nearly a full month since Georgia Republican Rep. Marjorie Taylor Greene issued — and subsequently bungled — a rare public apology for repeatedly trivializing the Holocaust.

"I have made a mistake," she proclaimed during a surprise press conference on the steps of the U.S. Capitol Building in mid-June. "This afternoon I visited the Holocaust Museum. The Holocaust is … there’s nothing comparable to it. … It happened, and, you know, over 6 million Jewish people were murdered."

Wow! A mea culpa? From MTG?? Sounds too good to be true, right? Well, it was.

It seems, in fact, that the lessons gleaned from her single visit to a museum frequented largely by school kids on field trips may not have fully been absorbed into Greene's perfectly smooth orb of a brain after all. Because this week, MTG was back to her old tricks once more — and by "tricks," I mean "making wildly outlandish comparisons to the rise of Germany's Nazi Party under Adolf Hitler."

Why yes, congresswoman, a massive effort to vaccinate people — that is, to literally keep them alive — in the midst of a global pandemic is very much the same thing as the Nazi Sturmabteilung "Brownshirt" street thugs who helped Hitler rise to power. Extremely good analogy there, ma'am. Tremendous work.

That Greene seems unable to think of any sort of political action except through the lens of Nazi-ism is problematic in and of itself. That she's so eager to compare medical vaccinations with Nazi brownshirts, while wholly ignoring her own party's association with its own legions of uniformed, organized, paramilitary street thugs is even more damning.

Of course, none of this is all that surprising when you consider that MTG has rocketed to the forefront of the post-Trump GOP thanks in no small part to statements like this. To the extent that she ever actually felt bad about making her initial Holocaust analogies, it was clear that it was never going to stick. This is what she does. This is who she's been since long before her time in office. It's what got her in the door, and until she can find a better way to grab eyeballs and headlines, it's what she's going to keep doing to stay firmly planted right where she is.

More like this
QAnon queen Marjorie Taylor Greene got suspended from Twitter for spreading coronavirus misinformation
By AJ Dellinger
So weird how Sean Hannity is super into the vaccine now
By Vanessa Taylor
More than 200 GOP lawmakers asked the Supreme Court to overturn Roe v. Wade
By Rafi Schwartz
Stay up to date