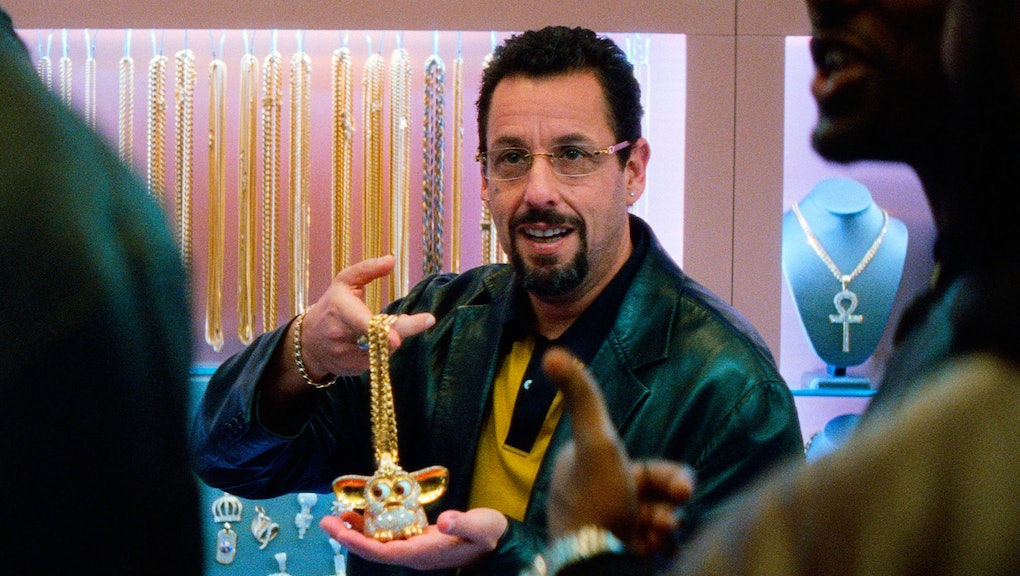 Sandler in UNCUT GEMS. ©A24

Let’s get one thing out of the way: Adam Sandler is incredibly compelling in Uncut Gems. It’s a startling and brilliant performance from the funny guy primarily known for cranking out slapstick comedies in the ‘90s. Sandler himself said if he doesn’t win an Oscar for the role, he’s going to go back to making bad movies on purpose, and it’d be a damn shame if that happened.

Alright, now that we’ve established that Sandler is a very funny and talented performer, it’s time to yuck some yums. On Tuesday, The Cut published an essay proclaiming that Sandler is sexy both in Uncut Gems and in real life. And like, we’re as obsessed with the movie as the rest of the internet, but calling Sandler “so hot” seems like a stretch, doesn’t it? This is a man who has been schlubbing around in basketball shorts and oversized tees for two decades.

Ed Sheeran, with his patchy ginger beard, became a "sex god" circa 2017 with his single “Shape of You,” where he crooned, "Last night you were in my room / and now my bedsheets smell like you." The madness prompted an investigation by the Tampa Bay Times into whether Sheeran was, indeed, hot.

At the height of Succession fervor this September, Refinery29’s editorial team unpacked their complicated crushes on Kendall Roy, a “swaggering douchebag executive” played by Jeremy Strong. Mashable ranked the entirety of the conniving Roy clan on the basis of crush-worthiness. While I’m admittedly a Gerri and Roman ‘shipper, the idea of actually finding any of the Roys hot is legitimately disturbing to me! They’re all sociopaths.

One thing about all the horniness that’s really interesting is that we’ve begun exploring the female gaze more lately, and the spectrum of what heterosexual women find attractive does include more than just the stereotypical hot man. The discourse around female desire has opened up dramatically. The podcast Thirst Aid Kit, hosted by Bim Adewunmi and Nichole Perkins, has done a great job digging into the “various ways women express their thirst” in the last two years, for example.

Everyone is entitled to their own definition of sexy, but it’s usually white men who are given the benefit of personality and talent in order to be considered unconventionally hot. Sandler falls into that category, for sure. He’s a successful comedian and talented actor. Judging from his strange, sweet stand-up special last year, he seems like a great partner and father. All of these qualities are totally attractive. But penning an essay that gushes Sandler has “the sexual magnetism of a young Clive Owen stealing your girl?” Or praising his transition lenses in Uncut Gems and writing, “Take me from day to night, daddy.” You lost me there, guys.