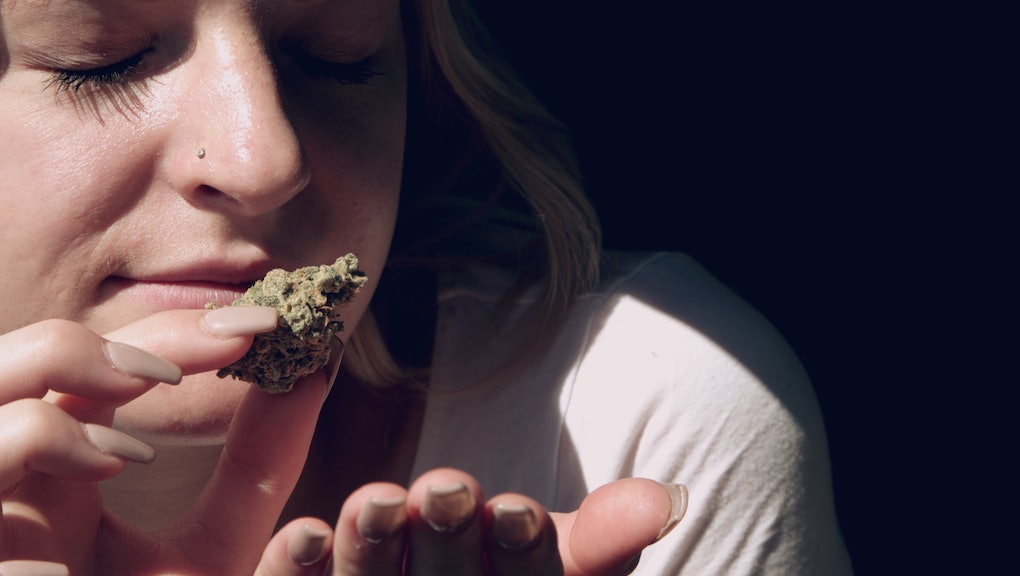 What are terpenes and how do they affect my high?

If you’ve spent enough time scrolling through a weed delivery service’s offerings or consulting with your local budtender, you’ve probably heard of terpenes and how they can shape your experience of cannabis, offering what seems like a fun way to tailor your high to your vibe. Does science back this claim, though, or is it just more weed marketing BS? To better understand what terpenes are and whether they can actually enhance your high, I spoke with Lewis Nelson, chair of the department of emergency medicine and chief of the division of medical toxicology at Rutgers New Jersey Medical School.

Terpenes are a class of small compounds that impart cannabis with flavor and fragrance, Nelson tells me. They’re a major reason why Lemon Drop tastes lemony and OG Skunk smells skunky. And many plants contain them, not just cannabis. The limonene that makes some strains smell and/or taste like lemon, for instance, is also found in citrus fruits.

While terpenes don’t get you high, Nelson says there are claims that they can affect your high through what’s known as the entourage effect — the idea that the panoply of compounds in cannabis, which vary across strains, work synergistically with each other to make you feel a certain way.

For simplicity’s sake, let’s focus on how terpenes influence the effect of tetrahydrocannabinol, or THC, the compound that gets you lifted. THC does this by binding to specific endocannabinoid receptors distributed throughout your body. Nelson says that some scientists have suggested that terpenes and other molecules in various strains of cannabis “change the way the THC affects your receptor and makes your experience different.” This supposedly explains why one strain, which contains a specific set of compounds, gives you a lethargic body high, while another, containing a different set of compounds, yields an energized head high (although it’s worth pointing out that some believe that the scientific basis of weed strains is a little sketch).

Clearly, terpene profiles vary from one strain to the next, so that each one tastes and smells different, Nelson says. But this raises the question: How much of the difference in the high you experience from various strains is due to differences in the terpenes altering how THC binds its receptors, versus differences in the flavors and aromas the terpenes produce? Can the flavor and aroma of cannabis shape your expectation of how it’ll affect you, creating something of a placebo effect?

“The science is very mixed,” Nelson says. “The people who have looked at this in the most strident ways” — that is, those who have conducted rigorous clinical trials designed to minimize bias — “don’t really show the entourage effect to be very robust.”

At the same time, he believes in the entourage effect to some extent, given that pure, pharmaceutical THC — like Marinol, used to curb nausea and vomiting related to chemotherapy and stimulate appetite in people with AIDS — is “not very psychoactive.” Weed, on the other hand, is absolutely psychoactive, he says, suggesting that other compounds in cannabis act on THC to result in its characteristic high. "I do think there is something to be said for chemicals interacting with THC and causing it to have a different effect," he explains. It’s just hard to pinpoint which chemical is doing what.

Some cannabis websites say that certain terpenes have certain psychological effects — limonene can supposedly quell anxiety and jumpstart energy, for example, while pinene can improve memory. But Nelson says these claims are backed mostly by surveys and anecdotes, not strictly-controlled clinical trials. Part of the problem is that conducting research on a federally illegal substance like cannabis involves a ton of legal hurdles, he notes, and an elaborate study to show the subtle differences between strains, though interesting, isn’t exactly lucrative to the pharma companies with the ability to fund it.

“But at some level, what matters is how it makes you feel, not whether or not science has proven it makes you feel that way,” Nelson says. In other words, if smoking a strain high in limonene makes you feel more sedate, who’s to argue? “The placebo effect is real,” he explains, that is, the limonene really did chill you out, even if it might’ve been because you expected it to do so.

In short, terpenes may affect your high, but we aren’t sure how. I find that the taste and aroma that terpenes provide enhance my overall experience of smoking weed, beyond the high. If you think terpenes add to the experience, whatever that means for you, then they do, even if it may not be "scientifically proven" in the traditional sense.

This article was originally published on June 4, 2021

More like this
Uncontrollable, weed-induced vomiting is on the rise, according to new research
By Tracey Anne Duncan
For young people, it’s weed over alcohol during stressful times
By Melissa Pandika
'Nine Perfect Strangers' is a deranged portrait of psychedelic wellness retreats
By Erin Qualey
Stay up to date