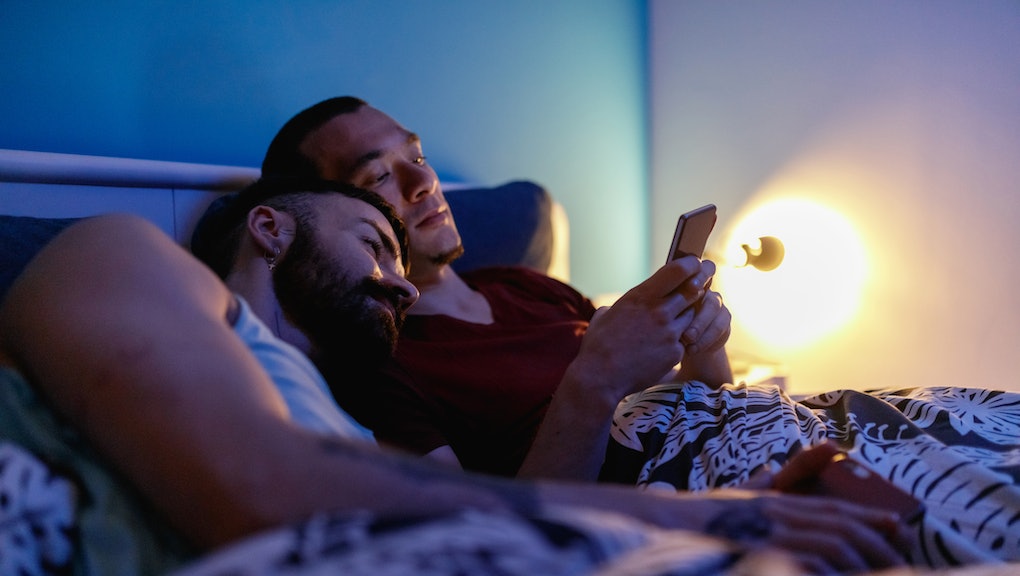 I'm poly, which means that not only do I think it’s acceptable to have more than one sexual or romantic partner, I prefer it for myself and also the people I date. I know that my perspective is not the norm, though, and I also believe that interpersonal contracts are sacred. Betrayal — which can happen in any type of relationship — is no bueno. But when monogamous folks talk about their partners having "emotional affairs," I honestly don’t know what the problem is. You mean your boo has a friend? That seems healthy. I want to be a compassionate friend, though, so I started an investigation to find out if emotional cheating exists — and if so, what constitutes the act.

Because of my belief system, being emotionally intimate with someone who you’re not in a relationship with doesn’t equate to cheating. “Emotional cheating can be viewed as the breaking of trust that occurs when one keeps intimate, meaningful secrets from their primary romantic partner,” says Christene Lozano, a California-based psychotherapist who specializes in sex and relationship therapy. “There is a loss of relationship trust. It may not necessarily be any specific romantic act, but it could involve lying, keeping secrets, or manipulation.”

Well when you put it like that, it does sound really hurtful. Lying and secret keeping are deal breakers as far as I’m concerned. Emotional cheating, then, can include secretly continuously texting someone about deep and personal matters, flirting with someone else in a way that makes your partner feel violated.

On the other hand, I recognize that your partner(s) cannot fulfill your every emotional need. It has to be okay to have emotional experiences that you don’t share with them. I wonder if sharing everything makes certain people way too dependent on their relationships for stability. “Emotional cheating definitely can be codependent,” says Kristina Jones, a New York-based psychotherapist who helps people navigate queer and nonmonogamous relationships. “There are certainly people who, from my perspective, take the definition of infidelity a little far, but honestly that's up to them. If their partner agrees to that definition, then who am I to judge?”

The point that both Jones and Lozano make seems to be that emotional cheating isn’t really about a specific act, it’s about breaking an interpersonal agreement. “Ideally, each individual's understanding of what constitutes any kind of cheating would be a clearly defined boundary at the beginning.” This, I agree with heartily. If you come to an agreement about how to be in a relationship with someone, it is a major betrayal when they break it.

A little sticking point for me, though, is that the whole idea of emotional cheating seems to be based on the idea that relationships should never change, that — to put it in legal terms — once we have agreed on the terms of a contract, that contract can never shift. That seems unrealistic to me. Humans change, I think, and our relationships evolve accordingly. “I find that monogamous folx tend to forget about the importance of boundary and fidelity discussions and instead run on assumptions of what relationships should be like,” Jones says.

In other words, people in monogamous relationships may tend to assume that the terms of their relationships will never change. This feels natural, as monogamy is just a cultural norm. But assuming that we all have the same ideas about fidelity and honesty and that those ideas will never change also seems to be part of the problem that may lead to emotional cheating in the first place. If you have emotional or physical needs that a partner can’t or won’t meet, but getting those needs met by someone else is considered cheating, it seems like it would be really hard not to cheat.

Someone may be emotionally unfaithful, but it may not mean that they don’t care about their partner. “It's never as simple as, ‘they're just an asshole and that's why they cheated,’” Jones says. “If you're seeking validation from somebody outside your relationship, then something is missing. And if you either don't feel comfortable expressing that to your partner, or you have told them something's missing and they didn't help address those needs, that’s an even bigger issue.”

Jones is expressing that humans may sometimes hurt and betray each other in order to get their own needs met — but the real problem may not be the cheating. It may be communication. Practically speaking, in order for people in a relationship to get their emotional needs met, they must feel comfortable discussing those needs, hearing their partner’s, and negotiating about how those needs can be met.

That kind of direct and vulnerable communication requires trust, and trust is both the key to preventing emotional cheating and also the path to healing from it. Telling a partner that you have emotional needs that aren’t being met in the relationship is hard, I know, but it’s a lot easier than telling them you cheated — whether that, to you, means sleeping with someone else or confiding in someone else about something deeply personal.

Being committed to honest communication, even when it’s uncomfortable, allows everyone in a relationship to maintain their dignity. No one has to wonder about what the rules are or if they’re breaking them. Consistently showing emotional honesty is laborious, but it’s that labor that’s really important. As Lozano puts it, “The work involves building trust with a partner and it also involves building trust within yourself.”

So, then, yes, emotional cheating is real. But the antidote, it seems, is having an honest and open relationship — whether it’s poly, monogamous, or anything else in between. There is another theory that many, including therapists, often don't consider, Lozano points out. “Emotional and sexual affairs are oftentimes a form of self-discovery, a search for a new or lost identity,” she says. “They involve expansion, exploration, and transformation — a quest for a new self.” If you establish a partnership in which everyone is invited to be themselves and to change and grow, it may be possible to avoid the very real experience of emotional betrayal and, I would argue, for everyone involved to be a little happier.

More like this
What is sploshing, the food fetish that's taking over TikTok?
By Melissa Pandika
California could ban nonconsensual condom removal. Why isn't this already illegal?
By Melissa Pandika
Delta might be the last COVID nightmare variant we get
By Ian Kumamoto
Stay up to date