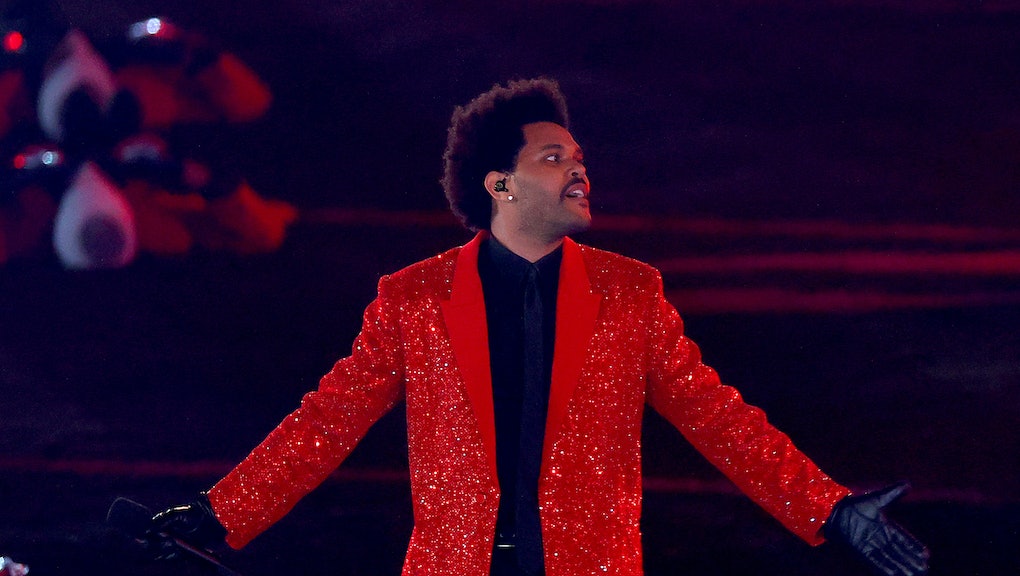 What happens when The Weeknd is too much for Abel Tesfaye to handle?

The Weeknd is not suicidal, but Abel Tesfaye has been trying to kill him off for years. In his recent GQ cover story titled "The Weeknd vs Abel Tesfaye," the mega-popular artist explains how doesn't love the name The Weeknd as much as he did at the start of his career, an admission which highlights the split personality that has buoyed his career to unimaginable success and existential crisis.

In the interview, the singer born Abel Tesfaye explains he chose his now iconic stage name while making his breakthrough debut mixtape House of Balloons in 2011, which was originally titled The Weekend. He chose The Weeknd because 20-year-old Tesfaye didn't love his birth name. After a decade of turning dark drug stories and heartbreak into awards, plaques, and one of the best Super Bowl performances of all-time, Tesfaye now views the popular moniker as a personality to show off when the time calls rather than an identity inextricable of the man he really is.

"I still like it, but I think now it’s easy to take off that coat. I like that I have that as an option to escape Abel a little bit," The Weeknd said. "I definitely loved it more back then than I do now. I love my name now, though: Abel."

For years in the beginning of his career, it was hard for anyone to distinguish Abel from The Weeknd, including the man himself. By August 18, 2011 when he released Thursday, his second mixtape in the first eight months of the year, his only public appearance was a July 2011 performance at Toronto's Mod Club. Until his first U.S. performance at Coachella in April 2012, The Weeknd existed solely as an ethereal sonic manifestation of our darkest carnal desires with no face attached to the grooves, let alone his actual name. You couldn't separate the man from the music because the man was only the music for more than a year. He now sees "The Weeknd is someone I go to work as," and Abel is who he goes home to every night.

Outside of The Weeknd comparing his artist persona as Mr. Hyde, the evil alter-ego of scientist Dr. Jekyll, he gives a rare insight into how he's been battling The Weeknd in front of our faces for years. When asked why The Weeknd is always brutalized in his music videos, the enigmatic artist explains it as his way of removing The Weeknd from Abel. It's at this moment he reveals one of the most poignant statements he's made about fame in his entire career: "I think it’s me removing The Weeknd from the world, but he still finds his way back. He keeps coming out. 'Blinding Lights' is obviously not going to have him disappear anytime soon."

The idea of popularity imprisoning him in an alter-ego that he has creatively attempted to remove himself from is one that astutely examines the responsibility concomitant of ubiquity. The Weeknd is as much an idea as he is an artist. He represents the carefree party atmosphere and wonders of life lived with no boundaries. The Weeknd sniffs coke until he can't feel his face; Abel admitted to spending years shaking a drug habit. The Weeknd is the life of the party; Abel only drinks occasionally and is no longer swayed by "the romance of drinking." Abel is the one prepared to explain his explicit lyrics to his future kids. The Weeknd has built the legacy Abel will have to one day explain.

With a new album being prepared for release and Weeknd professing in his interview "the story of that name isn’t done yet," Abel may have to continue taking a backseat to the music that has taken over the man.

More like this
What happens to a Drake deferred?
By Jayson Rodriguez
Lil Nas X delivered his baby, 'Montero,' along with an ill-fated love story
By Kara Weisenstein
The moral of Nicki Minaj and the Tale of the Giant Balls? We need to explain vaccines better
By Kara Weisenstein
Stay up to date