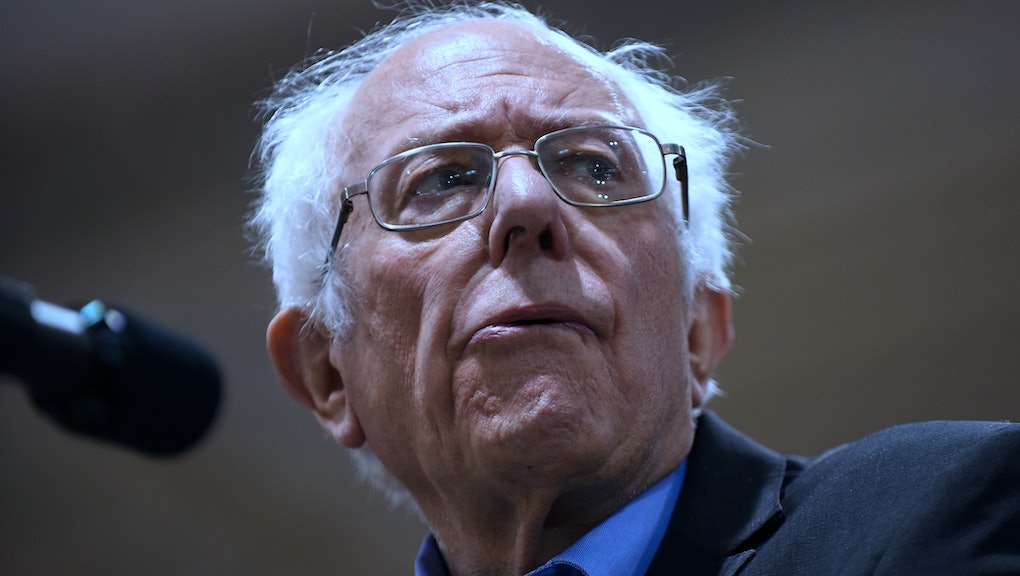 What is a superdelegate? The convention technicality that could divide Democrats

Time is a flat circle. There is nothing new under the sun. The past is prologue. However you want to put it, Democratic superdelegates are back in the news this week, thanks to an exhaustive report by The New York Times detailing a growing chorus of Democratic Party insiders and notables who have begun openly musing about using their power to deny frontrunner Bernie Sanders the presidential nomination come convention time. The gambit would come into play should Sanders win a plurality, but not an outright majority, of pledged delegates from his primary races — and has the risk of kneecapping the party entirely.

These 771 "superdelegates," comprised of elected officials like members of Congress, former party leaders like ex-presidents, and members of the DNC leadership, aren't allowed to vote for a nominee during the first round of balloting. If any candidate secures 1991 normal delegates — just over half of the 3,979 total normal delegates — on the first ballot at the convention, they win the party's presidential nomination outright. But should a candidate not hit that magic number, a new round of balloting begins — one that allows the superdelegates to toss their considerable weight around and potentially sway the nomination process as a whole.

Which brings us back to Sanders, and the Times's new report.

"If he doesn’t have a majority, it stands to reason that he may not become the nominee."

While the Vermont senator is the Democrats' clear frontrunner at the moment and is poised to win in a number of Super Tuesday races to further cement his leader status, it's unclear whether he'll actually earn enough pledged delegates to secure the nomination on the first ballot. And for party leaders jilted by Sanders's criticism of Democratic leadership, coupled with their untested belief that he could not only lose the White House, but negatively affect down-ballot races as well, him falling short on the first ballot would afford them the opportunity to use their powers as superdelegates to wrest the nomination from him entirely — will of the voters be damned.

Of the 93 superdelegates who spoke with the Times, only nine said that a Sanders plurality — rather than an outright majority — should be enough to secure the nomination.

"Bernie wants to redefine the rules and just say he just needs a plurality," New York State Democratic Party Chairman Jay Jacobs told the Times. "I don’t think we buy that. I don’t think the mainstream of the Democratic Party buys that. If he doesn’t have a majority, it stands to reason that he may not become the nominee."

"If you could get to a convention and pick [Ohio Sen.] Sherrod Brown, that would be wonderful, but that’s more like a novel,” Tennessee Rep. Steve Cohen added. But “Donald Trump’s presidency is like a horror story, so if you can have a horror story you might as well have a novel.”

"How you can spend four or five months hoping you don’t have to put a bumper sticker from that guy on your car?" said Chris Dodd, a former DNC chairman, former senator, and current Joe Biden supporter.

Sanders himself seemed well aware of the possibility that his winning a plurality, rather than a majority, of delegates during the primary season might lead to a rancorous intra-party fight this summer. During the Nevada debate earlier this month, he was the only candidate who voiced support for the nomination going to the person with the most delegates, even if they have not amassed a majority, rather than allowing a second ballot at the convention.

If all sounds vaguely familiar, it's because this isn't the first time a Sanders campaign has set its sights on superdelegates. During the 2016 primary race against eventual nominee Hillary Clinton, Sanders backers vociferously protested the Democratic Party's use of superdelegates as subverting the will of the voters — until Sanders's campaign itself pivoted toward a last-minute plan of wooing superdelegates to close the gap between Clinton and himself.

"We can argue about the merits of having superdelegates, but we do have them," Sanders 2016 campaign manager Jeff Weaver explained to NPR two months before the 2016 convention. "If their role is just to rubber-stamp the pledged-delegate count then they really aren't needed. They're supposed to exercise independent judgment about who they think can lead the party forward to victory."

In fact, it was the acrimonious 2016 primary race that prompted the DNC to change its superdelegate rules to only allow them a vote in the event of a second convention ballot during this year's election. Previously, superdelegates were allowed to throw their full weight behind any candidate they wanted from the moment balloting began.

"If Bernie gets a plurality and nobody else is even close and the superdelegates weigh in and say, 'We know better than the voters,' I think that will be a big problem."

But the fight over superdelegates in this year's race is about more than simply who becomes the Democratic nominee for president — it represents a bigger schism within the party itself.

"If Bernie gets a plurality and nobody else is even close and the superdelegates weigh in and say, 'We know better than the voters,' I think that will be a big problem," Washington Rep. Pramila Jayapal, who has endorsed Sanders, told the Times.

Any attempt by DNC officials to interfere in the nominating process would indeed be seen by many Sanders supporters as a declaration of war against the party's progressive wing, and would likely cause not only a rift at the convention itself, but depress general election turnout from what has emerged as the party's most vocal and animated base. It would, in other words, endanger any eventual Democratic nominee's chances of winning the presidency.

Recognizing the risk of a fatally fractured party this week, House Speaker Nancy Pelosi attempted to soothe the jittered nerves of her colleagues, confirming that she'd be perfectly comfortable with a Sanders nomination and telling fellow House Democrats that "I would hope that everyone would say, no matter who the nominee is for president, we wholeheartedly embrace that person."

With momentum on his side from a combination of dominant wins and near-ties in Iowa, New Hampshire, and Nevada, Sanders may well emerge from Super Tuesday with a commanding enough delegate lead to put to rest any dyspeptic hand-writing from party leaders. If he doesn't, however, this year's Democratic National Convention could be one for the record books.

More like this
What is court packing, and why are Democrats suddenly so into the idea?
By Ray Levy Uyeda
The new "America First Caucus" is giving off big Nazi vibes
By Rafi Schwartz
Texas Republicans are plotting to create a two-tier election disenfranchisement system
By Rafi Schwartz
Stay up to date