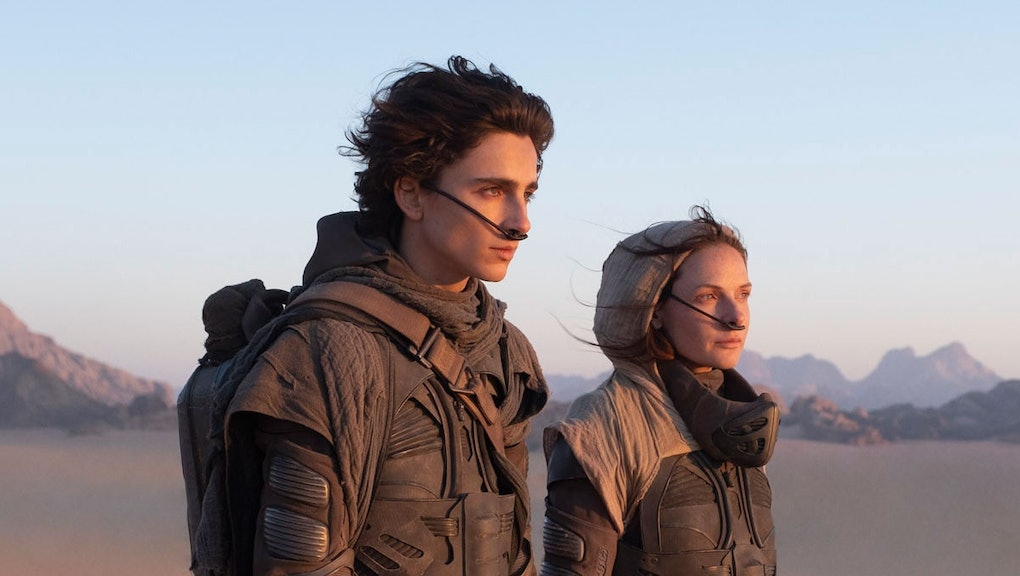 What is 'Dune' about, anyway?

The first trailer for Dune hit the internet and has cinephiles chattering about sand worms, Zendaya’s bright blue eyes, and “spice” — but what does it all mean? The plot of the space epic is convoluted, to say the least. Director Denis Villeneuve (Blade Runner 2049) is the latest in a long line of filmmakers to attempt an adaptation of Frank Herbert’s 1965 novel, which is revered as somewhat of a sci-fi Bible. The new film is slated to hit theaters this December (pending the severity of the pandemic), but whether audiences will embrace the complicated lore at the center of Dune's universe is somewhat of a gamble.

Here's Dune's basic premise: Paul Atreides (Timothée Chalamet) is a young space prince, whose rich and powerful family, led by his father Duke Leto (Oscar Issac), gets sent to the desert planet of Arrakis, colloquially known as “Dune.” It’s the only place in the universe where humans can harvest “spice,” or the psychoactive drug that more-or-less powers civilization. In high doses, it lets people bend space and time, thus enabling faster-than-lightspeed space travel. In lower doses, it makes you psychic. Oh, and a side effect is that it turns your eyes blue. Natives of Arrakis, tribes known as Fremen, consume the drug as a matter of routine. (Zendaya portrays a Fremen woman named Chani, hence her cerulean gaze.) How do the giant sand worms fit in? They produce spice, but they also routinely devour mining operations in search of the drug, so it’s a high-risk enterprise.

There's a lot more doing on in Dune, and if you're intrigued by the new film, giving Herbert’s novel a read before December probably isn't a bad idea. The book directly inspired numerous classics in sci-fi canon, like Star Wars, Star Trek, Firefly, Hayao Miyazaki's Nausicaa of the Valley of the Wind, and even Beetlejuice. David Lynch is the other film legend to attempt a Dune adaptation, but famously dislikes his 1984 version.

Challenges aside, Villeneuve has a bevy of A-list actors backing him up. There’s Chalamet and Zendaya almost-kissing in the first moments of the trailer. Charlotte Rampling wielding a tiny dagger. Issac with a scraggly salt-and-pepper beard. Jason Momoa shouting boisterously, as he often does. Evidently, the new film only covers a portion of the Dune story (which could be why Zendaya got such mysteriously low billing in the credits of the trailer — her character makes a real entrance midway through the book). Combined with the fact that the film's first trailer makes it look a awful lot like a Christopher Nolan flick crossed with something out of the Marvel Cinematic Universe, it seems likely we'll see lots more of Dune in years to come.