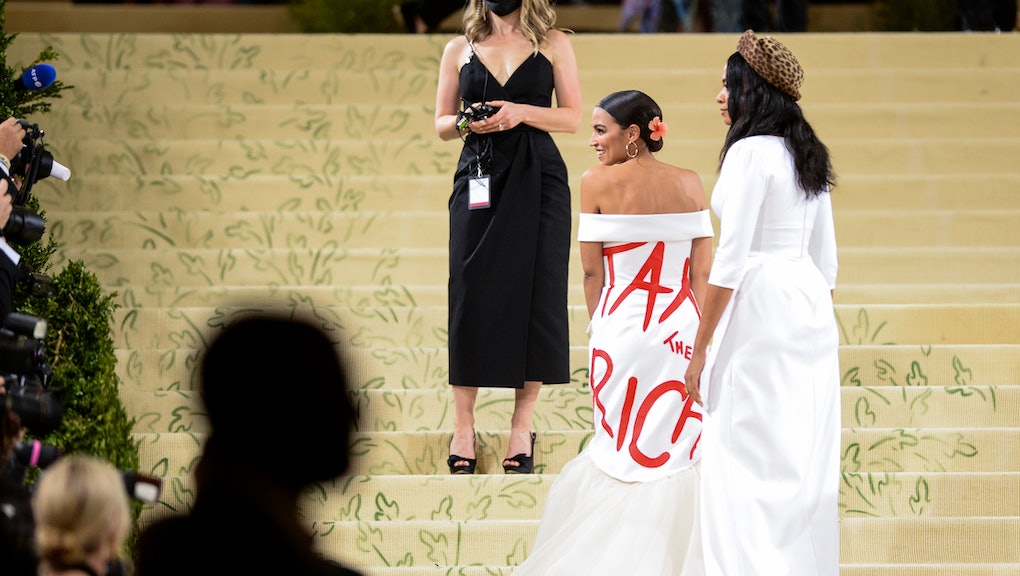 What is the role of activism on the red carpet?

People ought to be talking about California's consequential recall election today, but instead the internet is fixated on a dress. Specifically, the white gown emblazoned with "tax the rich" worn to the 2021 Met Gala by Representative Alexandria Ocasio-Cortez, which caught flak from right- and left-wing folks alike. Designed by Aurora James, founder and creative director of Brooklyn-based brand Brother Vellies, the dress was intended to insert the congresswoman's crusade for economic justice into one of the glitziest events of the year. Despite the fact that AOC spends her day-to-day fighting for what her backside was preaching at the fancy party, some people called her a hypocrite. Others called her attire a lazy example of slacktivism.

No matter what you think of the dress, it certainly caused a splash. AOC posted a screenshot of Google Trends to her Instagram story, showing a surge in people searching the phrase "tax the rich." James addressed her divisive design on Instagram on Tuesday: "Fashion at its best is a tool to express ourselves, share our cultural identities and challenge ideas and norms," she wrote. "With access comes great opportunity," she continued in her post. "We can never get too comfortable in our seats at the table once they’ve been given. We must always continue to push ourselves, push our colleagues, push the culture and push this Country forward. Even when it’s uncomfortable. Fashion is changing, America is changing."

AOC's activist attire drew the most attention, but lots of other attendees also chose to make a statement with what they wore to the first Met Gala in more than two years. New York Representative Carolyn Maloney used her dress as an opportunity to lobby for the Equal Rights Amendment. "Across the country, women’s rights are under attack," Maloney wrote on Twitter. "I have long used fashion as a force [for] change." Her sartorial decisions haven't always hit the mark. She's the same congresswoman who wore a burqa on the House floor in 2001 to support the American invasion of Afghanistan.

Theirs were the most straightforward statements of fashion activism, but plenty of other stars chose their outfits with a message in mind, too. Amandla Stenberg, who is nonbinary, said they were surprised by the 2021 theme, "In America: A Lexicon of Fashion," since we're living through such "polarizing" times. Her solution was to salute the Black and queer communities instead, including incorporating a durag made out of hair into her look. Saweetie, meanwhile, wore a bedazzled cape incorporating the Filipino and Black American heritage flags. "That's what makes me an American girl," she told E! news.

Makeup artist Nikkie de Jager paid homage to transgender rights icon Marsha P. Johnson in a turquoise tulle gown adorned with flowers. A large bow read "pay it no mind," Johnson's catchphrase and also what the "P" in her name stands for. Likewise, Dan Levy's bold outfit was a tribute to artist and LGBTQ+ activist David Wojnarovicz, who died in 1992. His map-covered ensemble, intended to symbolize a roadmap for change, featured a silhouette of two men kissing inspired by one of Wojnarovicz's pieces. Soccer star Megan Rapinoe, meanwhile, kept things straightforward, carrying a clutch that read "America" on one side and "in gay we trust" on the other.

Overall, there was less red, white and blue at the Met Gala than you might've expected, but an exception was Debbie Harry in a show-stopping Zac Posen gown. At first glance, its denim bodice and red-and-white striped skirt seemed overtly patriotic, but a closer look at its artfully frayed edges evoked a tattered U.S. flag, symbolizing the unraveling of American democracy. Several celebrities channeled the Statue of Liberty, like Amanda Gorman, who accessorized her blue Vera Wang dress with a silver Swarovski crystal laurel wreath (the traditional headwear of poets) and a clutch shaped like a book that read "give us your tired," a nod to the poem by Emma Lazarus on the statue's pedestal.

The 2021 Met Gala was hardly the first time stars used the red carpet to make an activist statement. Remember when Natalie Portman donned a cape embroidered with the names of eight female directors snubbed by the 2020 Oscars? At its best, when fashion is used to make a social justice statement, it melds medium and message into provocative, wearable art, sparking conversation and real change. At its worst, it hits people over the head with platitudes while doing nothing to actually shift the status quo. Last night's looks ran the gamut from subtly impactful to garishly performative, but one thing is certain: the Met courted controversy by staging a celebration of Americana, since our nation means a lot of different things to a lot of different people these days.