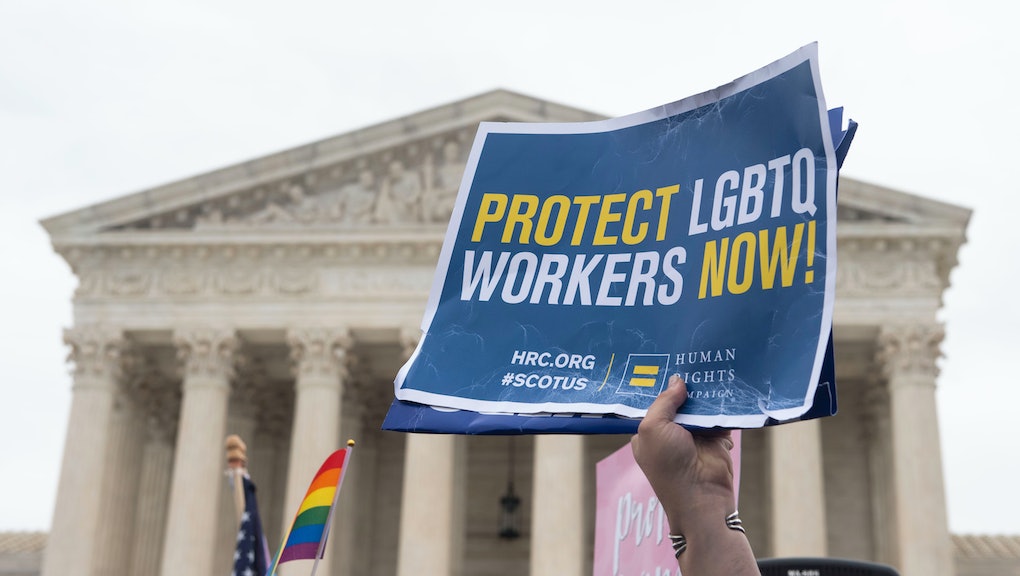 What is Title VII? Why Civil Rights Act of 1964 is at center of LGBTQ discrimination case

On Tuesday, oral arguments began in the Supreme Court's latest landmark LGBTQ discrimination case. The high court agreed to hear three separate cases in tandem in order to make a ruling based on Title VII of the 1964 Civil Rights Act, which prohibits sex-based discrimination in the workplace. The question the justices must answer is how inclusively to interpret the word "sex," and whether discrimination based on sexual orientation or gender identity counts as sex discrimination.

Title VII has been taken to underscore many court cases over the years, including ones argued before the Supreme Court, and the Civil Rights Act even lent its famous creed to the title of a Hollywood biopic. But what does the statute — just one of 11 segments of the landmark 1964 legislation — actually say? Here's a brief rundown.

What does Title VII actually say?

Title VII of the Civil Rights Act deals with workplace discrimination and employee protections. While the other portions of the law address issues like voting rights, education, and access to public spaces, Title VII is titled Equal Employment Opportunity. It established the eponymous Equal Employment Opportunity Commission to enforce its rules and made discrimination by businesses toward their workers based on certain characteristics illegal.

The relevant part of the text reads: "It shall be an unlawful employment practice for an employer to fail or refuse to hire or to discharge any individual, or otherwise to discriminate against any individual ... because of such individual's race, color, religion, sex, or national origin." It further implicates employment agencies, labor organizations, and training programs, saying those entities cannot discriminate against an individual "on the basis of his race, color, religion, sex, or national origin."

How does Title VII define sex?

For the cases coming now before the Supreme Court, it's the discrimination "on the basis of ... sex" that is at issue. Sex is generally understood as the set of biological characteristics that indicate male or female, while gender is the more complex and fluid spectrum of identities based on societal norms.

When it comes to the law, how inclusively the word "sex" should be interpreted depends who you ask. The pro-LGBTQ rights advocates who faced the court Tuesday say that protection against sex discrimination should extend to sexual orientation and gender identity as well because the concepts are fundamentally linked to a person's sex.

But what does Title VII itself say about the distinction between sex and gender? In a word: nothing. And it's hard to imagine that the lawmakers who drafted the Civil Rights Act in the mid-1960s had LGBTQ individuals in mind when conceiving of its protections, giving other prevailing homophobic attitudes and laws on the books at the time.

What are the Title VII cases the Supreme Court is weighing?

In Bostock v. Clayton County, former Georgia government employee Gerald Bostock contends that he was unlawfully fired for being gay after he joined a local gay softball league. His lawyers have said that his case falls under sex discrimination because Bostock is a man attracted to men; presumably a woman attracted to men would have been permitted to keep her job without incident, the lawyers contend. The same basic facts are at play in a second case, Altitude Express Inc. vs. Zarda, in which a former New York skydiving instructor argued that he was fired after he told a female customer he was gay in an attempt to make her feel more comfortable with doing a tandem dive.

But the third case on the court's docket, R.G. & G.R. Harris Funeral Homes Inc. v. Equal Employment Opportunity Commission, is different in its explicit centering of gender identity rather than sexual orientation. Aimee Stephens, a transgender woman, was fired from her job at a Michigan funeral home after she wrote her boss a letter explaining that she intended to come out publicly in the workplace. Stephens's employer, who is devoutly religious, acknowledged firing Stephens because she "wanted to dress like a woman," denying Stephens's gender identity and saying her request to dress as a woman violated the company's sex-specific dress code. Lawyers for Harris Funeral Homes argue that Stephens's sex discrimination case is moot because if a woman had wanted to dress in men's clothing in the workplace, she would have also been terminated. If both sexes would be treated the same for the same conduct, there is no prejudicial treatment on the basis of sex.

A lower court that previously ruled in Stephens's favor, however, argued that it is "analytically impossible" to fire a transgender employee for their gender identity without it being sex discrimination. The dismissal would be due to the employer "imposing its stereotypical notions of how sexual organs and gender identity ought to align," the lower court ruled. The Supreme Court thus has to decide whether gender identity is rooted in sex in a way that would constitute "discrimination ... on the basis of sex," or whether the 1964 law should be interpreted more narrowly.

More like this
Why are there protests in Colombia? How a tax proposal ignited decades of unrest
By Ray Levy Uyeda
Kamala Harris's trip to Guatemala highlights Biden's impossible task on immigration
By Vanessa Taylor
Supreme Court justices' political leanings: A guide to the 2021 court
By Vanessa Taylor
Stay up to date