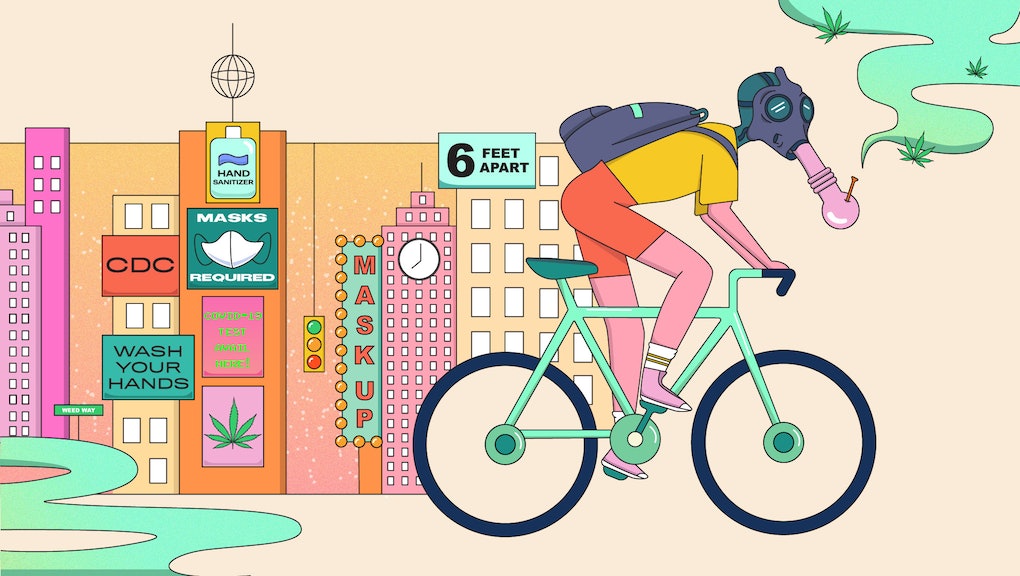 In the early days of the pandemic, New York was hit harder than almost anywhere else in the world. A neverending chorus of ambulances became the city’s soundtrack, and daily deaths were counted by the hundreds, reaching 1003 by April 14. Cooling trucks were transformed into makeshift morgues, holding bodies outside various hospitals around the five boroughs. No one was sure what was coming next, but as the headlines made clear, everyone knew things were going to get a lot worse before they got better.

As restaurants, bars, and shops shut their doors, New York’s long-bustling delivery economy sprang into overdrive. Couriers on bikes, electric scooters, and in cars rushed through deserted streets delivering prepared meals, groceries, soap and disinfectants, and all sorts of other essentials — including weed — to a city in lockdown.

Weed delivery services have been a reliable industry in New York for decades, an open secret that every pot consumer knows. They are a beloved part of the city, and during the pandemic they proved just how valuable they really are. Armed with masks, gloves, and bottles of sanitizer, they visited countless apartments on demand, bringing with them everything New Yorkers needed to survive a lockdown: greens, edibles, and waxes.

I recently spoke with my own weed delivery person — let’s call her Claire — about what her job was like during the height of the pandemic. She’s been doing this job for two years, and when the virus hit in March 2020, she decided to keep working. “At first it was like, ‘Oh my god, this is a little crazy, I don’t know if I should do this,’” she tells me. At that time, hundreds of New Yorkers were dying every day, but quitting wasn’t an option for Claire. “I had to do it. You have to hustle, you have to make money,” she says.

It didn’t take long for business to boom. With so many people stuck at home, “people actually started smoking more,” Claire says. “Unemployment came in and they are spending their money on me.” She says the increase in orders was largely driven by “a lot of white people buying herb.”

Yocasta, another weed messenger I connected with via WhatsApp, saw the pandemic as an opportunity to pivot within the business. Four months before COVID-19 made it to New York, she started working in the packaging process, rolling joints. But around March 13, the same day 154 New Yorkers tested positive for the virus — a figure that grew to a peak of 104,410 one month later — Yocasta got on her electric bike and began a new job delivering weed around the city.

“They said that everything going on was really like what had happened during the Great Depression."

She recalls that it was a wholly unique experience, “because people were in fear, they were so scared.” But a conversation with co-workers motivated Yocasta to risk her life delivering marijuana. “They said that everything going on was really like what had happened during the Great Depression,” she says. “During that time, people were depressed, scared, without work, and the only companies that succeeded were the tobacco companies.”

If cigarettes were the drug of choice during the Great Depression, Yocasta mused, now it was weed’s turn. “We had a ton of clients,” she says, noting that during the hardest times of the pandemic, she had 10 to 15 deliveries per day. And, she adds, “people were more generous,” offering tips as high as $40, $80, and even $100 — despite the $10 “surge” fee Yocasta’s company charged during these new busier times.

The money was certainly good, but the job of delivering weed during a pandemic had its downsides and uncertainties. Tensions may have been high, but Claire, my delivery person, says most people she delivered to were “nice,” even with the uncertainty of how the virus moved from person to person. But under the new strange circumstances, not everyone was willing to invite her inside their apartments to avoid being seen by cops or nosey neighbors like they did in the Before Times. “Certain people get you inside, some not,” she says. “It’s a professional job.”

Yocasta recalls that her customers also had a tendency to overshare during their brief interactions. “That was weird, because I’m a delivery person,” she says. She recalls that once, a super depressed woman was really happy to see her, and when she told the customer that she had the goodies, she replied “‘Thanks! I wouldn’t know what to do without you. You are heroes!’. She even said the customer tried to hug her, “but I was like ‘No, don’t touch me.’”

That wasn’t the only time strange things happened. “Another white lady, who was an acupuncturist and always is around her two small kids, told me, ‘I wouldn’t know what to do without you guys, I’d probably kill myself,’” Yocasta says. “I said ‘Oh my god, lady, I’m only your delivery person.’ You know what I mean? It’s too much info.”

Both Claire and Yocasta are still delivering weed, and with the prospect of more vaccinated people — at the time of writing, almost 6 and a half million New Yorkers had gotten a shot — and the recent legalization of pot in the city, the job is looking better, safer than it has in a long time.

More like this
A mother and daughter have been charged with murder after performing a back alley butt lift
By Melissa Pandika
Could fresh air be the key to ending the pandemic?
By Melissa Pandika
After shutting up for a minute, celebrities want everyone to listen to them again
By Brandon Yu
Stay up to date