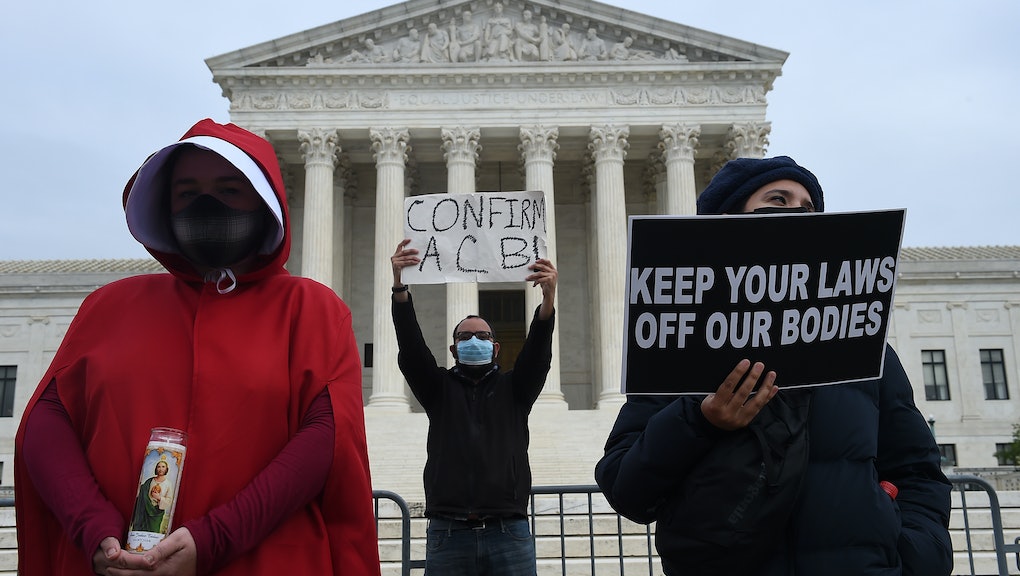 As we all drown in the uncertainty of the presidential race, one thing is becoming abundantly certain: Our reproductive rights are under attack. Last night, Louisiana passed an amendment which says that the state’s constitution does not protect a person’s right to abortion or in any way allow public funding of abortion. I asked sex workers to explain what this abortion amendment means for them — and the rest of us. People who work in the sex industry tend to be better informed about the laws and policies that govern our bodies and sexual behavior than basically everyone and are also often more comfortable speaking candidly — and with deep insight — about controversial topics.

“None of this is good news for folks who can get pregnant,” Xena Zeitgeist, a 30 year-old event producer, advocate, and smut peddler in New Orleans, tells Mic. For context, Louisiana already has what’s called a trigger law that would immediately ban all abortions if Roe v. Wade were to fall, so this amendment to the state’s constitution will make it even more difficult to fight restrictions on abortion. “It’s still going to come down to the Supreme Court, which gives a little hope, though not much considering [late Justice Ruth Bader Ginsburg]'s replacement,” Zeitgeist says, referring to new Justice Amy Coney Barrett.

Zeitgeist points out that the amendment as it appeared on the ballot was so poorly worded that a lot of people were unsure what they were even voting for. “The amendment was intentionally worded poorly and the [voting] numbers reflect that,” they say. “This is frustrating and alarming in a way that makes it hard to look away from ways that policy makers manipulate voters.”

This is a crucial point. This is the actual phrasing from the ballot: "Do you support an amendment declaring that, to protect human life, a right to abortion and the funding of abortion shall not be found in the Louisiana Constitution?" Seriously? What does it even mean to vote yes or no on whether something is “found” in a document? Am I voting to add a right or subtract one? I vote in Louisiana, and the only reason I understood what those words meant is because I read literally every progressive voter guide in the weeks before the election.

The deliberate confusion this kind of language creates is symptomatic of a larger problem in the state’s pro-life approach to “upholding” Roe v. Wade. Abortion is legal in Louisiana, but no one knows about it, because sex educators in the state aren’t allowed to talk about “abortion.”

Now that the state has no obligation to protect a person’s right to abortion, sex educators are facing a higher burden to inform people about their rights while simultaneously being gagged.

“This law shifts the focus onto sex education to a degree that we’ve never seen before,” Bella Blue, a 38 year-old performer, educator, and activist in New Orleans who considers her work to be a combination of sex work and social work, tells me. This amendment is a refusal to fund education about abortion, and that shifts even more responsibility onto sex educators to “reinforce to people that they have the option to make decisions for themselves in their bodies,” Blue says.

Blue describes her own experience of having an abortion over 10 years ago in Louisiana as lonely and confusing. “There wasn’t any support,” she says. Now, with two children of her own, Blue also nannies a 3-year-old, and tells me that she is concerned that laws like this mean it will be even worse for these future generations. “If it’s like this now, unless there’s a radical change, she may have way less education than I had,” Blue says. The combination of oppressive moves on the part of state lawmakers, deliberate obfuscation of ballot measures, and lack of effective sex education in Louisiana add up to a terrifying reality for uterus-havers here. “The shitty experiences that you have over and over again become your sex education,” Blue says.

Let that sink in. Because the state has declared that it will not protect or educate its citizens about sex and abortion or provide any resources, all those burdens fall on individuals. The result is that Louisianans who don’t grow up in open sex-positive environments end up learning about sex through their traumatic experiences, like Blue’s own alienating abortion. Even if you, personally, don’t want people to terminate unwanted pregnancies, do you really want back-alley abortions to become the sad schoolrooms of the future?

Louisiana’s amendment is just the first glimpse into what could happen all over this country, given the current makeup of the Supreme Court. I know it’s hard to think about everything we have to lose when we are fighting so hard for a win, but don’t forget that reproductive rights affect every person of every gender, and that taking them away means more than simply banning abortion. Taking away our rights to make choices about our own bodies means they no longer belong to us. Instead, our bodies belong to the state, and — as we have seen in the COVID-19 pandemic — the state will not protect us.