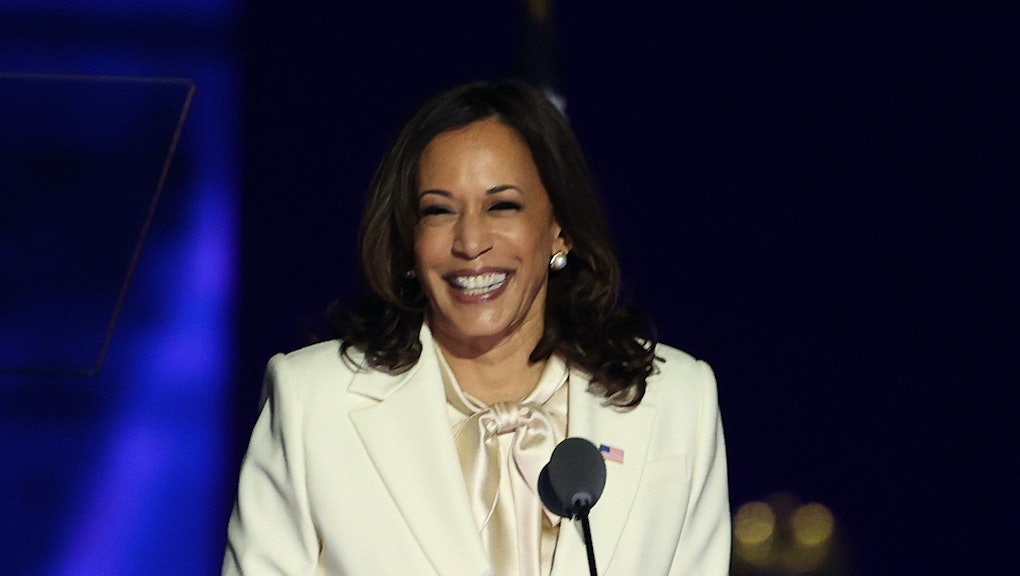 What makes someone charismatic? Experts break it down

I’ve stumbled across a handful of media stories that describe President Trump as “charismatic” — but as I watched snippets of his campaign speeches in recent months, I wondered, "To whom?" As someone deeply repulsed by Trump, I struggle to find anything remotely magnetic about him. Vice President-elect Kamala Harris, on the other hand, despite my complicated feelings about her, radiates charisma. Seriously, what makes someone charismatic? Is there a scientific explanation for charisma, or is it some magical quality you either have, or you don’t?

To investigate, I spoke with two researchers who study the psychology of charisma. They’ve found that charismatic people do in fact exhibit specific behaviors, and the good — or terrifying — news is that anyone can learn them. That said, just because you engage in these behaviors doesn’t mean everyone will perceive you as charismatic — only those who share your values.

It’s important to understand that charisma isn’t a quality or characteristic people possess, but something we perceive in them, explains Jochen Menges, a leadership scholar at the University of Zurich and Cambridge Judge Business School. In other words, “charisma is in the eye of the beholder,” he says, “but there are ways I can affect that impression as a leader.”

Charismatic leaders tend to display five behaviors which significantly increase their likelihood of being seen as such, Menges tells me. First off, they oppose the status quo. “They are not happy with how things are right now,” Menges says. “They offer a vision of a better future.” And only those they wish to appeal to need to share that vision, which may mean 20 people in a garage, or hundreds of thousands of people joining a social movement. “What is important is that you want to change something.”

Charismatic leaders also act courageous and break convention, Menges says, citing Trump’s tweets as an example. Four years ago, his stream-of-consciousness tweeting was “seen as very unconventional, and his followers thought it was courageous,” praising it as the truth that everyone else was too scared to speak. (Again, it depends on who you ask. Many of us non-Trumpers saw it as narcissistic, misleading, and, at times, dangerous.)

Optimism in the face of adversity is another characteristic charismatic leaders share, whether it’s Trump claiming trade wars are “easy to win,” or President-elect Joe Biden saying we can beat the pandemic. They express strong emotions, too — take, say, Biden’s annoyed “Will you shut up, man?” during the first presidential debate, and Trump’s angry diatribes against the press.

Finally, charismatic leaders employ a predictable set of tactics in their speeches, Menges says. “They tend to use metaphors, stories, and anecdotes,” rather than facts, figures, or evidence, like Biden’s depiction of the pandemic’s toll with an empty chair at the dinner table — “an image in the mind we can see and feel.” They often speak in terms of ‘we,’ not ‘I,”; set high expectations; talk about the past, present, and future; and use an animated voice and strong gestures.

Indeed, charisma “has to do with signaling information,” explains John Antonakis, a professor of organizational behavior at the Faculty of Business and Economics of the University of Lausanne. As a charismatic leader, “you need to say what we have to do, what are the long-term vision and goals, and package it in a way that’s memorable.”

Such leaders speak in unpretentious, easily understood ways, Antonakis explains. To pull this off, they need know their topic well, and anticipate how their audience will consume what they say. He cites Martin Luther King, Jr.’s use of a bad check as a metaphor for the basic rights the nation had promised, yet still owed, Black Americans in his 1963 “I Have a Dream” speech. Rather than resorting to legalistic language, he triggered an image his audience instantly grasped.

This signaling does come at a cost, Antonakis explains. The more your followers — that is, those whose values you represent — like you, the more those who don’t share those values loathe you. That explains why Trump disgusts me, but allures his supporters.

“He’s very confident in identifying what needs to be done,” Antonakis says regarding the source of Trump’s charisma. “He’s very clear about his values… and he often speaks in kind of folksy ways. There are more stories and metaphors.” That said, he’s not as charismatic as, say, former President Barack Obama, who Antonakis views as “the pinnacle of charisma.”

Although Trump does signal charisma, he’s so arrogant that he probably doesn’t come across as charismatic even to Republicans who share his values, Antonakis says. Still, “he’s more charismatic than Biden.... Joe Biden is more low-key, more humble, and more normal.” (After the past four years, I suspect many of us would gladly welcome a low-key president.)

Any sentence in Harris’s DNC speech had a 60% probability of having a charismatic effect — higher than Biden or Trump’s speeches, consistent with my perception of Harris as more charismatic than either of them. Whether you find someone more charismatic also depends on “if you can identify with them more easily, if you feel like they’re telling your story, your dream,” Menges says. It makes sense, then, that I find myself more drawn to Harris — who shares my identity as a Bay Area-raised, Asian American daughter of immigrants — than to Biden.

A phenomenon Menges calls the “awestruck effect” is a testament to the power of charisma. Charismatic leaders can move us at such an emotional level that we allocate cognitive resources to maintaining our composure, so that we no longer have any available to scrutinize whether what they say is coherent or true, for instance, or whether counterarguments exist. Emotions, not facts, matter. “We’re so overtaken by our emotions that our rational thinking is turned off,” Menges says, smoothing over criticism that gets in the way of sweeping change — whether good or evil. We saw this during Obama's 2008 campaign, which promised hope and progress, but also during Trump's 2016 campaign, which promised a return to "the good old days" of a less equitable America.

But Antonakis points out various limitations of the awestruck effect, including his observation that some charismatic leaders "may trigger a wild expressiveness in their followers,” as in Obama or Trump’s campaign rallies, rather than restraint. You might bite your tongue in front of Stalin or another despot, but because of their power, not their charisma.

How to become more charismatic

Although charisma may seem like an elusive X-factor, Antonakis and his colleagues’ research has shown that we can all learn charismatic leadership tactics, such as setting high goals and exuding confidence that they can be achieved. A Harvard Business Review article he co-wrote notes that practice is crucial, and suggests focusing on a couple of tactics you feel comfortable with so they appear organic, as well as asking for feedback from a coworker or loved one you trust.

Menges recommends starting with defining what aspect of the status quo you want to change and painting an evocative picture of a brighter future, allowing yourself to express emotions that show how much you care. Test your delivery on others. If they respond well, try taking it a step further and expressing even more emotion, for instance, and if they don’t, take a step back and assess what you need to do differently next time, and so on.

“You have to do it in small steps,” Menges says. “You can’t just become a charismatic person overnight.” Basically, unlocking the powers of charisma is within reach of us mere mortals — which can spell hope or doom, depending on which of us wields them.