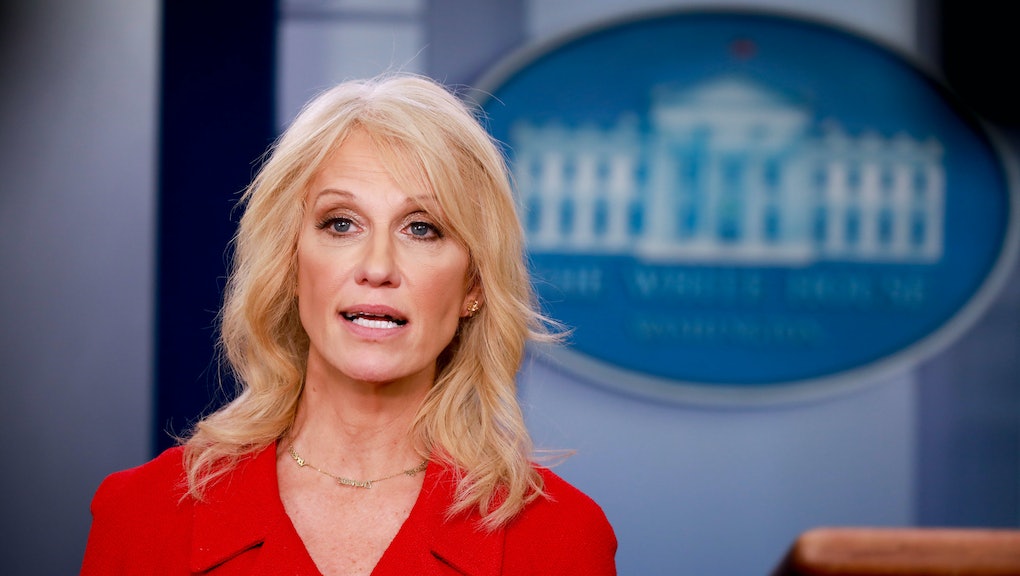 What on Earth is going on in the Conway household?

The Conway family crisis that’s been playing out semi-publicly on TikTok, Twitter, and in the media just gets sadder and more disturbing. On Monday, Kellyanne Conway allegedly shared a topless photo of her 16-year-old daughter, Claudia, on Twitter. The image was quickly deleted, but not before social media users screenshotted it as evidence (and some scumbags reposted it). The once-senior aide to disgraced former President Donald Trump has not responded.

The sensitive photo was posted via Twitter’s recently launched Fleets feature, which deletes posts after 24 hours, much like Instagram Stories or Snapchat. The post was removed long before it would’ve expired, but after Claudia’s supporters alerted her to its existence, the teen posted TikToks confirming the leaked nude was real. These videos have also been deleted, but people similarly saved and shared them across social media.

Claudia appeared visibly upset in the videos, at first in seeming disbelief. Once she acknowledged the photo's authenticity, she claimed she hadn’t shared it with anyone and speculated her mother might have swiped the image during one of the (allegedly numerous) times she confiscated her daughter’s phone. The 16-year-old said she didn’t think Kellyanne shared the photo on purpose. “I’m assuming my mom took a picture of it to use against me one day and then somebody hacked her or something,” Claudia said. “I’m literally at a loss for words. If you see it, report it.”

The teenager first announced she was seeking emancipation from her parents for alleged “trauma and abuse” in August 2020. She spent Monday night issuing pleas for help, both in plain English and also Morse code. "Please get people to talk about this," Claudia wrote in code in her TikTok comments. "I'm ok but scared af spread awareness pls."

The circumstances around how Claudia’s topless photo ended up on her mom’s Twitter are murky. But possession and distribution of nude images of a minor is a serious offense. Having child pornography on your phone in New Jersey (where the Conways live) can get you imprisoned for five years and added to a sex offender registry. Twitter says it has a "zero-tolerance child sexual exploitation policy," regardless of intent, and violators are usually unceremoniously and permanently booted from the platform.

As for the specific post from Kellyanne Conway's account, BuzzFeed News reports that the social media platform "did not respond to questions about whether it believes the fleet to be a violation of its rules, how long the post was visible, how many people saw it, and who deleted it." A representative for the New Jersey Department of Children and Families said that they’re “looking into all the concerns around the incident.”

In one of her now-deleted TikToks from Monday, Claudia raged that “nobody would ever have any photo like that, ever. So, Kellyanne, you’re going to fucking jail.” But the teen walked back her comments on Tuesday morning: “I know that my mom would never, ever post anything to hurt me like that intentionally, and I do believe she was hacked.” She also urged supporters to “stop calling authorities” and told them lobbing accusations at Kellyanne “hurts me more than it helps.”

Then, Claudia announced that she’s “taking a break from social media, because we are really tired of being headlines," she explained. "We fight like mothers and daughters, but being in the public eye exacerbates that greatly, and it adds a lot of stress to both of our lives, and I don’t want that.” In a recent, now-deleted TikTok, she had told her followers if she ever left social media, it wouldn’t be by choice. But on Tuesday she insisted, “This isn’t forced. This is coming completely from me, Claudia.”

Still, it's impossible to forget the haunting footage she's shown us recently. There's Claudia's video titled "a covid recap with kelly," which seems to show numerous instances of an adult berating a child and ends with what looks like a hand striking the teen as she records. But the reality of the teen's situation is that online hoards can do little to help her escape her family, if that's what she wants. As Vox's Rebecca Jennings wisely noted, it's possible for Claudia to both need to be heard and believed and also for her to need privacy to heal. The best thing any of us outsiders can do is respect her wishes.

More like this
If "Today Is America" then what the hell is tomorrow?
By Rafi Schwartz
There are QAnon NFTs now, because one grift deserves another
By AJ Dellinger
How the shock and confusion of 9/11 enabled our modern conspiracy era
By AJ Dellinger
Stay up to date