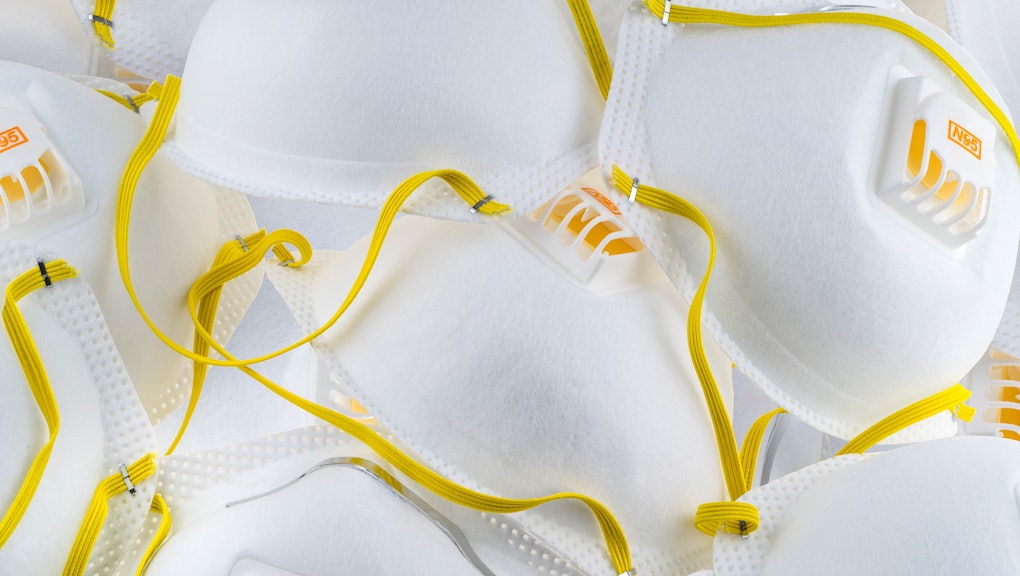 What survivalists taught me about making it through a pandemic

I have 100 N95 masks in my trunk right now. That’s over $600 in PPE that I don’t really need. Before you freak out, don’t worry, I plan to donate it. How did I come upon this treasure trove of life-saving gear when it's so hard to come by? A dear friend texted me a few weeks ago and said, “I just found hundreds of N95 masks in my attic.” His father, who previously lived in the house, is a bit of a prepper; he has rations and supplies set aside in case of emergency. I’ve seen all the crazy reality TV they make about survivalists and their doomsday conspiracy theories, but right now, I feel really grateful that I get to dole these babies out. This mask situation made me wonder: What else can survivalists teach us about surviving the COVID-19 pandemic?

First of all, when I started my research, I had some misconceptions about what survivalist culture was all about. I mistakenly thought of the terms “prepper,” and “survivalist,” synonymously, but what I found was that many folx prefer one to the other. “Many preppers don't like the term survivalist,” Joseph Daniel Alton, a 66-year-old retired physician and survivalist from Florida, told me. “The word conjures up visions of camouflage-clad, gun-toting, bunker dwellers. The grand majority of the preparedness community are regular folks who just want to prepare for the worst while hoping for the best.”

I had some misconceptions about what survivalist culture was all about.

Another misconception I had was that survivalists were all preparing for some sort of biblical end-of-days scenario. In reality, of the dozens of people I spoke with for this article, zero of them mentioned the apocalypse. Most of them seemed far more concerned about power outages and empty store shelves — which, as a person who lives in New Orleans, seems pretty realistic to me. I don’t think my friend’s father considers himself either a prepper or a survivalist, but like many people I spoke with, thinks of himself as a guy who’s made sure he and his loved ones can get through some really hard times.

All the survivalists I talked to agreed that the first step to surviving difficult conditions is getting your mind right. “Positive mental attitude is critical,” Christian Schauf, a 40-year-old in Utah, tells me. Schauf, by the way, does not refer to himself as a prepper. Schauf says that he likes to think of himself as more of an emergency situation expert. “We still have most resources at our disposal and, worst case, we’re being asked to stay in our homes, where we have everything we own. It’s completely do-able with the right attitude and perspective.” Feeling like you can handle the crazy situations life throws at you is apparently at the core of the whole survivalist mentality.

“The confidence you get from having useful skills in unstable times helps preppers sleep better at night,” Alton says. “The current pandemic should be a wake-up call for the whole country. Most people believe that they're invulnerable to disasters and that our government and medical infrastructure will always be there to help. The peace of mind you get from knowing what to do and being self-reliant is priceless.” So while preppers get a bad rap for being apocalypse-obsessed crazies, most of the people I talked just seemed realistically skeptical about the competence of the powers that be.

When I started researching for this story, honestly, all I wanted was an easy, practical list of things I could buy that might help me through an emergency. But none of the folx I spoke with were interested in having that conversation.

Survivalism as we know it now, as it turns out, is somewhat anti-capitalist, and seems to be based on the idea that acquiring skills and knowledge is a lot more important than hoarding necessities. “There is more evidence than ever that the system is fragile,” Jesse Crouch, a 34-year-old in Austin. Crouch runs a company called Never Astray that makes maps for preppers. “One disaster begets another and the supply chain is easily disrupted. We've seen shortages like never before.”

We should be prepared for the possibility that we may not be able to buy all the things we think we need, but that doesn’t necessarily mean hoarding them in advance. As Crouch explained it, “Preparedness isn't as simple as hoarding food and ammo — it's about being able to adapt.” People outside the prepper lifestyle may see armed men with moats and bunkers of canned goods, but that’s just who gets on reality TV. Most preppers don’t seem invested in making sure they have everything they need as much as they are in becoming the kind of people who don’t need that much. In this uncertain world, the self-reliance and adaptability that survivalists prize above all seems quite valuable indeed.

While preppers get a bad rap for being apocalypse obsessed crazies, honestly, most of the people I talked just seemed realistically skeptical about the competence of the powers that be.

So what are the skills that preppers think we need right now? Well, they’re more basic than you think. Schauf told me that it is becoming increasingly clear that we may not all have access to the critical care resources we have come to rely on, like easy access to doctors. A few months ago, this might have seemed like a paranoid declaration, but as COVID-19 rates soar, we have witnessed the hospitals fill up and we all know that doctors can no longer treat everyone.

“Being able to take care of yourself and your family for at least 72 hours greatly improves your chances of successfully navigating whatever you’re facing,” Schauf says. “This means not only having appropriate gear, but also the understanding — and hopefully practice — in how to use everything, and what the most important steps are to put yourself in a safer position.”

Alton agreed with this sentiment and added, “It's important to have the ability to put together an effective epidemic sick room and learn options that would give home caregivers the best chance of helping COVID-19 patients recover while staying healthy themselves.” The idea of providing triage medical care to your loved ones may be scary, but it might help to think about treating flu-like symptoms instead of an alligator bite.

The CDC has a guidebook for how to care for people who are sick with COVID-19 at home. You don’t need to set up a field hospital in your backyard, but knowing some first aid basics and some coronavirus-specific healthcare protocols definitely won’t hurt, and it may make you feel more confident about how you would respond if you or someone you care about got sick.

But preparedness is really what puts the prep in prepper, and the survivalists I spoke with seemed most excited to give advice about preventative health rather than what to do if you get sick. “Focusing on staying healthy is the most critical thing,” Schauf says. “Exercise, healthy eating, good hygiene, and proper rest are all critical to providing an advantage in overcoming any sort of virus.”

But how do you stay properly nourished if the bodega shelves are empty? “If you recently experienced empty grocery shelves, you may consider learning how to grow a vegetable garden,” Alton adds. “There are other skills — like fire starting, food preservation, solar oven cooking, baking and cooking over fires, and how to make water drinkable — that are fun to learn and increase your self-reliance."

Frankly, I did not expect to feel as much kinship with these survivalist outliers as I do. I’m a queer city punk, after all, and I assumed that preppers were like rich conservatives hoarding the things we all need right now. There may be some survivalists who are like that, but what I discovered, to my great delight, is that most preppers are as anti-TP hoarding as I am. They want everyone to have what they need and they want people to realize that they need less crap than the white heterocapitalist overlords would have us believe.

Preppers want people to know that we humans can become a lot less dependent on potentially fallible systems if we shift our consumerist perspective to a more self-reliant one. Or as Alton puts it, “We're stretching the infrastructure to the limit. I hope that folks will be more apt to adopt the preparedness philosophy in the future.”

More like this
Your smaller pandemic friend group is actually a good thing
By Joseph Lamour
“Panny,” “panettone,” “panini”: Why silly pandemic nicknames are getting us through it
By Melissa Pandika
10 newly vaccinated people told us their Hot Vax Summer plans
By Ally Spiroff
Stay up to date