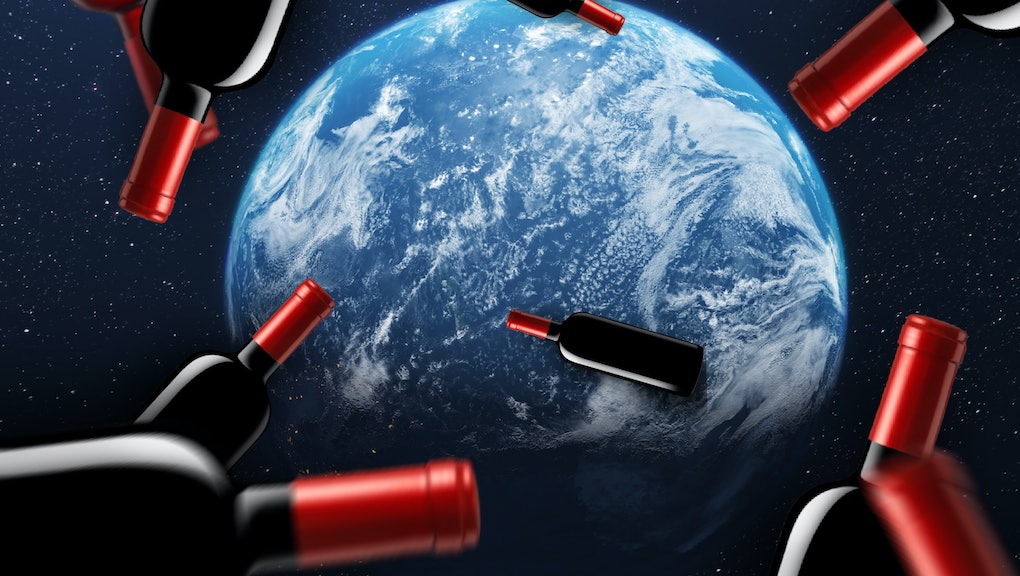 The expanse of outer space has always been intriguing to humankind, to say the least. And now that billionaires are getting into the space race, there's a certain credence to the luxury side of space exploration. That’s why, maybe, astronauts have moved from studying what happens to zinnia plants when you grow them in space to what happens to a nice red when you age it there. If you don’t want to have a glass of this wine aged in space, I’ll take yours, because I’m pretty certain it will taste amazing and perhaps give you superhuman powers.

Researchers in Bordeaux, France are analyzing a dozen bottles of Château Pétrus wine — a high-end red that usually retails for about $6,000 — that have spent an entire year aging in space. Along with the already-bottled wine, 320 snippets of Merlot and Cabernet Sauvignon grapevines were also cultivated for a year and returned to earth in January after spending time on the International Space Station. Yes, there are now grapes more well traveled than you.

The estate of Château Pétrus produces their wine from Merlot grapes and is located in the Pomerol appellation (a legally defined area where the grapes from a wine are grown) near its eastern border to Saint-Émilion, another appellation. If it sounds fancy, that’s because it is.

While the bottles they sent into space retail for around $6,000, the brand produces a range. You can get lesser vintages for as little as $195 a bottle, a steal if you think about it (really hard) but a single bottle of sought-after Château Pétrus can cost as much as a luxury vehicle — a bottle of ‘98 recently sold for $41,500, and another went for a whopping $144,000.

We know a little bit about the human body in space, as we have sent 833 people into orbit according to NASA, and have studied them when they return. But this is the first time a case of wine has been sent out beyond our atmosphere. As you know, wine’s flavor profile can be altered by various factors, including fertilizer composition, the use of inorganic or organic materials, fermenting it with yeast, and more. Researchers preliminary findings were that the weightlessness didn’t ruin the wine but changed it, and that also it seemed to energize the vines. It’s unclear what “energize” means, but I’d like to think that it means we’re one step closer in this reality to finding the source of the Scarlet Witch‘s powers.

The typical tasting notes of this deep red wine have “an incredible power, depth and richness yet a remarkable balance with penetrating aromas of ripe mulberry, black currant and fruit and spicy vanilla oak,” according to fine wine distributor Dreyfus, Ashby, and Company. However, experts say this wine tasted like rose petals, smelled like a campfire and glistened with a "burnt-orange hue,” once it returned from orbit.

More time is needed to study what’s happened to the wine molecularly, but this much is known: A bottle of this is likely going to cost an arm, a leg, and probably a mortgage. So instead, might I suggest just buying a bottle of red, buy a bouquet of roses, make a s’more, and turn on WandaVision to recreate the effect.

This article was originally published on March 25, 2021

More like this
The second vaccine shot is actually the star, new research shows
By Tracey Anne Duncan
Steak-umm, the social justice warrior no one asked for, tweets fire once again
By Joseph Lamour
Sex workers deserve to eat well. And Meals4Heels delivers
By Lovely Brown
Stay up to date