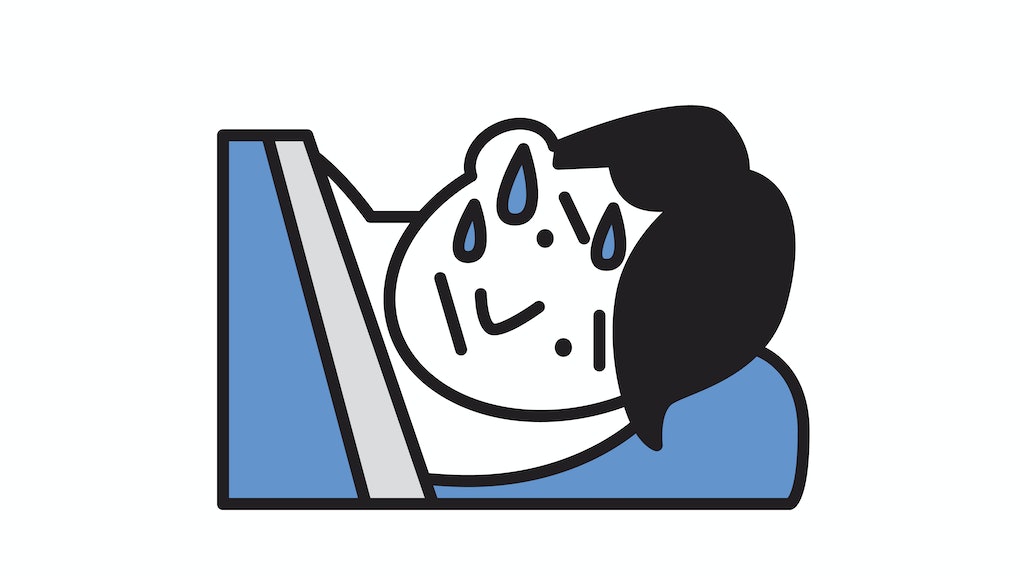 What's the deal with night sweats?

While sweating the bed isn’t quite as embarrassing as wetting the bed, it can leave your sheets swampy enough to gross you out and leave you perplexed. What's the deal with this excessive, nocturnal skin-leaking? How could a person possibly produce this much sweat without exerting any energy? Before you get all judgmental about it (or if you're cowering in shame because this is you), know that there are couple of different reasonable explanations for your or your sleeping partner's night sweats.

First, Human Perspiration 101: Sweating when you’re hot or exercising is normal and healthy. “The body cools itself off when overheated by sweating,” says Fayne Frey, New York City-based dermatologist, explains. “The nervous system automatically triggers the sweat glands to produce sweat. As the sweat evaporates, it cools the body. This process can also occur with anxiety.”

Sweating more than one would be expected to — considering ambient temperature, physical activity, or stress — can be an indication of a medical condition called hyperhidrosis. About 3% of Americans have hyperhidrosis, so it’s not that unusual, but it can be really uncomfortable. “Some individuals sweat so much that is soaks through clothes,” Frey says. “It can be an extremely annoying condition and very embarrassing to some.”

Night sweating, in itself, isn’t a separate condition; it’s just hyperhidrosis that happens at night. “The term ‘night sweating’ is not a medical term,” says Frey, “but rather a layperson’s term used for increased sweating at night.” But why are we noticing it at night? Frey says that the phenomenon could be environmental more than anything. “People who sleep with heavy comforters or keep their bedrooms too warm may complain of increased perspiration at night,” she says.

Also, what we’re all calling “night sweats," could, in some cases, just be folks using the bedding that’s not appropriate for them. Or, perhaps, folks who sleep together are using sheets and blankets that are right for one partner and wrong for the other and one person is getting blamed for sweating the bed. Sorry, every ex of mine, I really thought it was you.

The most common type of this condition, Primary focal hyperhidrosis, involves excessive sweating from a few different parts of your body. Doctors still aren’t sure what causes it, but Frey tells me that there seems to be a hereditary component (cool, another thing you can blame your parents for) and that it’s usually confined to the hands, feet, groin, armpits, and sometimes under the breasts.

A note to the people who never go to the doctor: There are a few not-so-innocuous underlying reasons for excessive puddles of sweat in your bed.

While stress is not likely a cause of hyperhidrosis, it certainly seems to aggravate it, so people with this condition might get sweaty at the prospect of getting sweaty. “I had a patient who was a salesman and had to shake hands as he met people for work,” Frey says. “But just the thought of shaking someone’s hand caused him to sweat so much I could see the sweat droplets dripping from his palms when we as we talked.” This poor dude appeared to have double-sweaty-palm syndrome.

I have a friend with hyperhidrosis, and she avoids shaking hands because she’s scared that her sweaty palms will freak people out or that they will think she’s sick and contagious. Although there are serious contagious infections that may cause excessive sweating, the majority of healthy people who manage this condition are not contagious.

A note to the people who never go to the doctor: There are a few not-so-innocuous underlying reasons for excessive puddles of sweat in your bed. It could be a sign of diabetes, menopause (hot flashes), thyroid conditions, or it could be a reaction to a medication you’re on, Frey says. This is called secondary hyperhidrosis — when excessive sweating not the main condition, but instead is a symptom of another, usually more serious condition. So, if you’re sleeping next to someone who’s super sweaty, it’s probably not a big deal, but they should see a doctor just to rule out anything serious, says Frey.

So what should people with night sweats do to make their lives a little drier? There are anticholinergic medications (pills that make you sweat less), but they require a prescription and a doctor’s supervision. Holistically, Frey suggests that staying hydrated, sleeping in a cool environment, using linens made of breathable materials, and avoiding heavy blankets could help.

There are also a lot of lightweight blankets out there designed specifically to be cooling, such as Buffy (the blanket that claims to be the most comfortable comforter on earth) and Sheex, if you’re in the position to drop a little more money. There are also some electric cooling blankets, pillows, and mattress pads on the market if you want to get high-tech about it.

I don’t sweat that much, period, but I kind of want one of these anyway since they look extremely cozy. And it can’t hurt to keep one around the house, just in case my next ex is a sweaty one, too.

This article was originally published on November 15, 2019

More like this
Didn’t get enough sleep? Here's how to survive the day, according to doctors
By Tracey Anne Duncan
India's failed COVID response leaves young people scouring social media for oxygen
By Urmi Bhattacheryya
What are COVID-19 escape mutants and how much do you need to worry about them?
By Melissa Pandika
Stay up to date