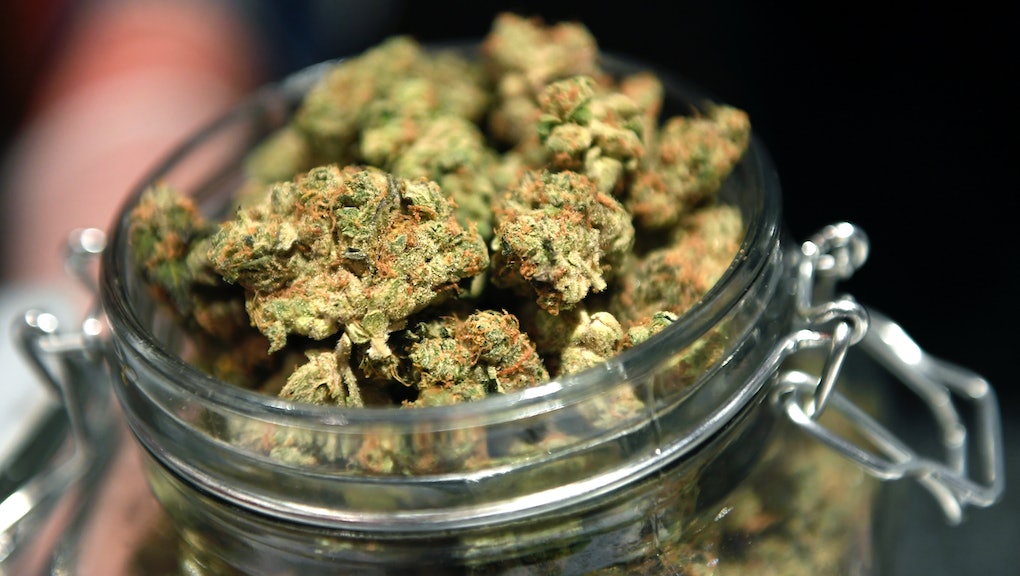 When can I buy weed in a state that just legalized it?

Look, we are all excited about weed inching toward legalization across the country. Goddex knows we could all use a toke right about now. Unfortunately, just because cannabis was legalized for recreational use yesterday in a few new places — Arizona, New Jersey, South Dakota, and Montana — does not mean that pre-rolls will hit shelves tomorrow. Each state will require a different process to move from weed legality to your trip to the dispensary.

"New Jersey in particular is trying to fast track this process, but it will likely still take a while, because the legislature has to set up the entire regulatory framework, including the licensing processing," Kassandra Frederique, executive director of the Drug Policy Alliance, a national nonprofit that works to end the war on drugs.

Because the New Jersey measure rightly includes strong racial and social justice provisions, that process could be a bit more extensive, she adds. And that means it'll take a little longer for dispensaries to set up shop. "While it’s not ideal to make people wait any longer to legally purchase and consume marijuana after voting to legalize it, we do want to make sure it is done right to benefit those communities which have been most harmed by prohibition," Frederique says.

Here are the details, teased out a little:

Possession must be decriminalized

In Arizona, Montana, and South Dakota the laws that passed which simultaneously legalized possession of marijuana for adults and also the distribution and selling of weed. But in New Jersey, while selling weed will become legal as of January 1, possession of weed is still illegal. That means that New Jersey’s Legislature and Cannabis Regulatory Commission must pass legislation that directs law enforcement to stop arresting people for marijuana possession, pass a decriminalization bill, or the state attorney general must issue an order telling police to stop arresting people for marijuana violations. The legislature could meet this week and quickly decide these issues or not.

While decriminalizing possession seems so obviously progressive, it actually opens its own sociopolitical can of worms. Many social justice activists think that decriminalizing weed is a crucial step towards ending the unceasing over policing of people in marginalized communities. Black Americans are four times as likely to be arrested for marijuana possession than white Americans, according to the American Civil Liberties Union (ACLU).

Industry regulations must be passed

Capitalism loves to make laws about how businesses can sell people things. Even in places where medical marijuana is already legal, a new set of regulations have to be decided before recreational dispensaries can apply for legal recreational distribution and go into business and dispensaries. This is not — unsurprisingly — always a quick and easy process.

South Dakota has until 2022 to create regulations and Montana has until October 2021, but Arizona may be good to go by November 30th. And, again, while New Jersey policy makers may meet this week, there’s no telling how much time agreeing on regulations will take. Cannabis industry proponents are cautiously optimistic about the process in New Jersey. “The biggest hurdle is making sure that the legislature moves quickly. They’ve gotta figure this out fast, ” Axel Owen, leader of the pro-marijuana legalization group NJ CAN 2020, told the New York Post.

Dispensaries must prove they have enough product

Once a dispensary is licensed, it has to be stocked to open. While this may seem like a simple supply and demand issue, it’s actually not. Existing medical dispensaries who get recreational licences have to prove that they have enough cannabis product to cover all prescriptions for medical marijuana before they can sell recreational weed. Sometimes in the past — like Chicago in January — recreational legalization has caused a run on the market and almost immediate shortages, so states have to make sure that dispensaries can meet medical needs first.

Getting enough weed to cover medical marijuana needs and also supply recreational enthusiasts could be problematic in New Jersey. “I could say unequivocally that opening up sales even a few months after the election would be a disaster and would really hurt access for patients who need this as medicine," Jeff Brown, the assistant commissioner in the state Department of Health who oversees the medical marijuana program in New Jersey, told NJ Cannabis Insider last week.

But places where medical weed has been legal longer — like Arizona — have a leg up on stocking shelves. “Our medical market is a much more mature market than a lot of others that expand into recreational sales," Steve White, the CEO of Harvest Health and Recreation, a Tempe-based cannabis company, told AZ Central. “We're not going to see the same type of supply-chain issues they see in other states.”

Because weed is still not legal federally, it’s still illegal to transport cannabis across state lines. That means that many new dispensaries will have to grow their own. It takes about four months for cannabis to grow from seed to harvest and then it must be prepared and packaged, so getting weed on shelves could take a minute.

Once it’s on the shelves, there could be other issues. Last year, Illinois dispensaries ran out of weed six days after it was legalized and many customers who waited in long lines went home empty handed. The prices of recreational weed could also be steeper than you might expect. When California legalized recreational cannabis in 2018, customers were shocked at the taxes they had to pay to purchase it, sometimes up to 23%, and a lot of weed lovers ended up going back to the black market to save money.

With all those caveats, you are still probably fiending to know how long it will take to get some sweet legal kush in your bowl. But the reality is that no one can say for sure, it could be as soon as November for weed lovers in Arizona and as late as 2022 for other states. Frederique asserts, however, that New Jersey seems very motivated to getting sales underway, so there's that.

It’s hard to predict because while this process has sometimes been lengthy in the past, Chicago’s dispensaries were stocked quite swiftly. "Illinois was able to go from legalizing to actually selling marijuana in only six months, but legalization was done through the legislature, which meant much of the work that has to be done now in New Jersey, was already done when they legalized it in Illinois," Frederique says. "Massachusetts, on the other hand, legalized it through a public referendum like New Jersey and it took about two years."

All of this may take more time than any of us would like, but as 2020 has shown us, time is a flat circle, anyways. But however long it takes to see the results, weed legalization in these four states and the decriminalization of “hard” drugs in others seems like at least a small step towards winning the war on finally ending this country’s racist war on drugs.

More like this
Can CBN help you sleep? The science behind the trendy weed compound
By Melissa Pandika
How going “California Sober” became the pandemic-era vibe
By Tracey Anne Duncan
What are terpenes and how do they affect my high?
By Melissa Pandika
Stay up to date