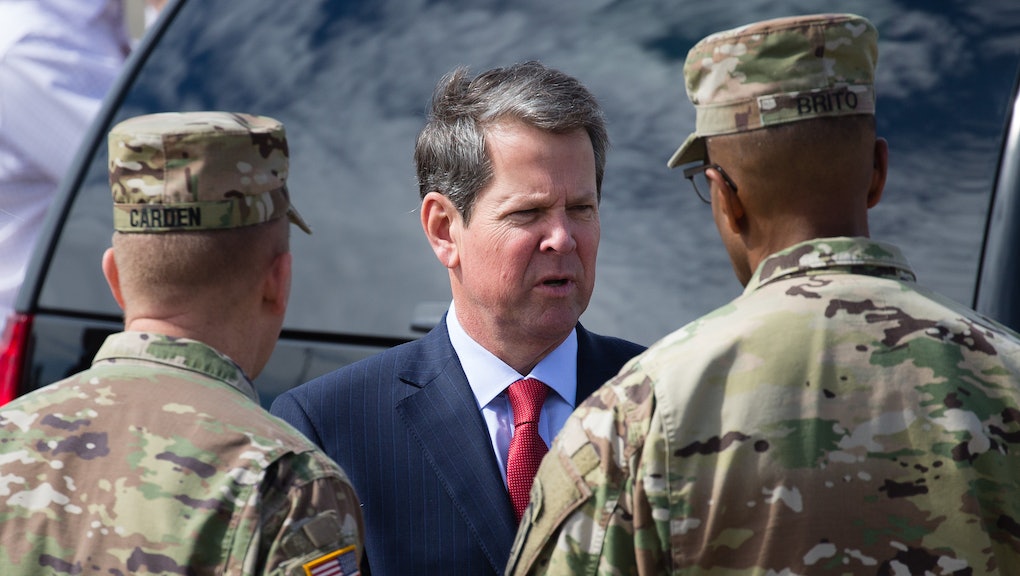 Where is Georgia Gov. Brian Kemp getting his coronavirus information?

In a press conference late Wednesday afternoon, Georgia Gov. Brian Kemp (R) announced he would sign a shelter-in-place order to help his constituents mitigate the more than 5,000 confirmed coronavirus cases in his state. The order would take effect Friday, he said.

On balance, this is a very good, if belated, development. As multiple states have seen over the past few months, social distancing — which shelter-in-place orders like Kemp's helps enforce — has been an effective way to slow the virus's spread. While it doesn't stop coronavirus entirely, social distancing has proven helpful in buying hospitals and emergency teams the time and breathing room they need to be able to address the pandemic without being overwhelmed. Locking down the state was a smart and necessary move.

Nevertheless, Kemp managed to snatch defeat from the jaws of victory during his announcement by adding that "this virus is now transmitting before people see signs" — a "game changer" of a fact that he claimed he "didn’t know ... until the last 24 hours."

Now, either Kemp is lying, or he's dangerously ignorant. Because despite the governor's framing Wednesday, medical professionals have been warning about asymptomatic coronavirus carriers for months. As the now-famous Dr. Anthony Fauci, the director of the National Institute of Allergy and Infectious Diseases, said the first week of February: "There’s no doubt after reading [a study published January in the New England Journal of Medicine] that asymptomatic transmission is occurring."

And here's Dr. Deborah Birx, another one of President Trump's go-to medical experts during this pandemic, speaking in mid-March about the dangers of unwitting carriers:

Until you really understand how many are asymptomatic and asymptomatically passing the virus on, we think it's better for the entire American public to know that the risk of serious illness may be low, but they could be potentially spreading the virus to others.

And here's a warning from the Centers for Disease Control this past weekend:

Not to mention reports from CNN (March 19), Discover Magazine (March 26), and Chinese medical research on an asymptomatic COVID-19 carrier (Feb. 21).

So Kemp's claim that this wasn't a known concern seems dubious at best. We're left then two distinct possibilities. The first is that Kemp, as governor of a large state, with his own vast administrative and emergency response apparatus, simply had no idea about what seems to be a fairly public concern from some of the most visible medical experts in the field — experts who have been trotted out on television by the president of the United States on a near-daily basis.

Not a great conclusion. But the alternative is that Kemp knew about the danger of asymptomatic transmission of coronavirus — and that he simply did not act on that knowledge until this week.