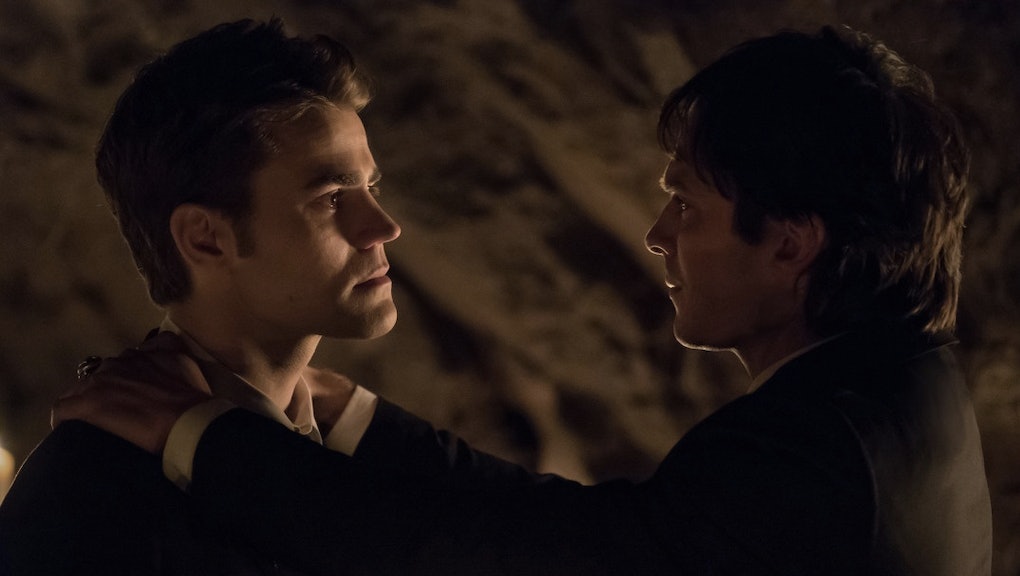 Where was 'Vampire Diaries' filmed? 7 locations you have to visit in Georgia

The cast and crew have long since packed their bags, but fans of the CW series can still drive around town and spot familiar places where Elena, Damon, Stefan, Caroline, Bonnie, and the rest of the gang hung out. Ahead, check out some of the best Vampire Diaries filming locations to visit while in Georgia, from the real life Whitmore College to the fictional-turned-real Mystic Grill.

Take a trip down memory lane with a drive past the home of Elena and Jeremy Gilbert. Yes, on the show, the house burned down in season four, but the property is still standing in Covington.

The house is currently occupied (it was on the market in 2012), but going inside isn't important anyway. Only the exterior of the house was used during filming.

You may want to visit the Lockwood mansion to pay your respects to Tyler and his family. The teen werewolf lost numerous loved ones throughout the series and ultimately met his own early demise.

In real life the Lockwood mansion is called Worthington Manor. It's a private residence, but a tour group in the area called Vampire Stalkers claims to have the exclusive rights to take you to the location. It may be worth the $55 if you're a fan of the Damon-and-Elena-heavy Miss Mystic Falls episode. If you simply want to drive by the location, you can find the address here.

Two buildings were actually used for filming the Lockwood mansion. While Worthington Manor was used for modern day shots, the Twelve Oaks Bed & Breakfast in Covington can be seen in flashback episodes to 1864. You can stay overnight at the bed and breakfast, which can be spotted in season two, episode four of The Vampire Diaries (and according to Twelve Oaks' website, the cast and crew also stayed there sometimes).

You can actually eat at the Mystic Grill  — just don't expect Matt Donovan to be your waiter. Partners John and Angi Beszborn and Ronnie and Kelley Johnston were inspired by fans of The Vampire Diaries and brought the fictional restaurant to life in 2014.

The inside of the restaurant might not be recognizable to viewers, though. The show only filmed outside of the building, and shot inside scenes on a soundstage. The building was filled with offices before being turned into a restaurant. Check out the menu here.

Let's hope that the real-life restaurant fares better than the on-screen Mystic Grill, which hasn't exactly had the best luck.

How many times did the town vampires hang out on top of the Mystic Falls clock tower? You might not be able to climb up, but you can still snap a photo in front of it. The clock tower is part of the Newton County Courthouse located in the center of town.

The Vampire Diaries didn't film exclusively in Covington. The series also shot some scenes at Oxford College in Oxford, Georgia. Oxford College doubled as Whitmore College, which is where Elena, Bonnie and Caroline attended school in season five. If only Alaric Saltzman was a real professor there.

While you're in Oxford, swing by Orna Villa, a historic Greek Revival house. Built in the 1820s, the location was transformed into a frat house for a memorable — and bloody — episode of The Vampire Diaries. Before Elena even got accepted to Whitmore, Damon took her to a frat costume party to experiment with choosing a victim. Orna Villa is located at 1008 N. Emory Street in Oxford, Georgia.

This article was originally published on March 3, 2017

More like this
Steve from 'Blue's Clues' gave us the closure we didn't know we needed
By Kara Weisenstein
The 8 best reality shows you're not watching, but should be
By Brandon Yu
Live from New York: Revisiting the totally bonkers era of post-9/11 'SNL'
By Rafi Schwartz
Stay up to date