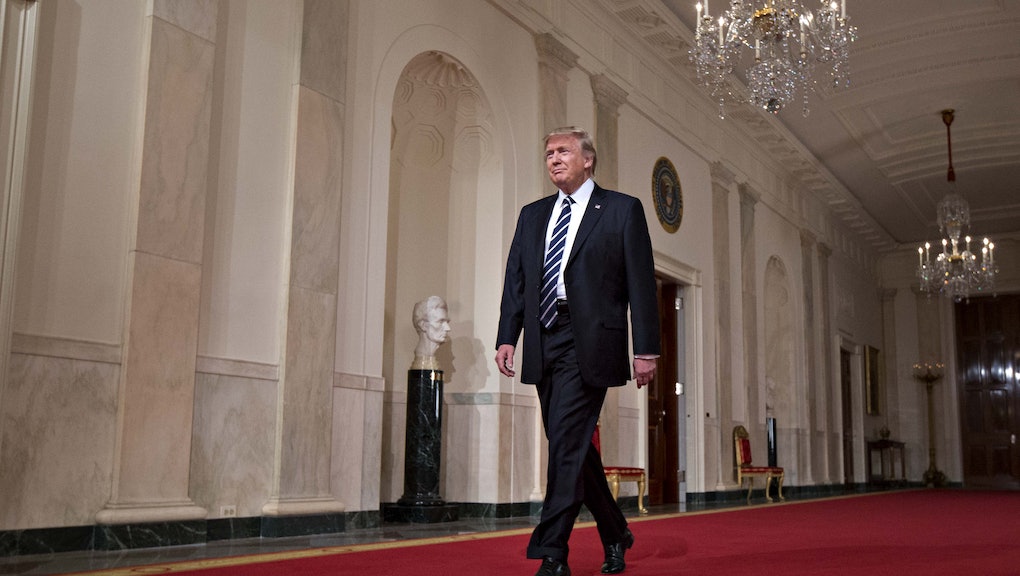 President Trump has been trying to keep his personal and professional tax records away from the public for years, but his fight to keep them private will soon come to a head. After court rulings that said he must turn his financial information over, the Supreme Court will hear cases on Trump's finances and ultimately determine whether he must provide the documents or not.

Trump's counsel Jay Sekulow posted a statement on Twitter, saying, "We are pleased that the Supreme Court granted review of the president’s three pending cases. These cases raise significant constitutional issues. We look forward to presenting our written and oral arguments."

The cases revolve around three subpoenas sent to firms that handled Trump's finances. Trump has tried to block the firms from handing his information over, and after the lower courts ruled against Trump, the Supreme Court is now hearing his appeals.

"These cases both involve access to the same records, but for very different purposes and very different uses," says George Washington University Law School Associate Dean Alan Morrison, who has argued 20 cases in the Supreme Court. Here's what the cases are all about.

In late August, Manhattan District Attorney Cy Vance issued a subpoena to Trump's accounting firm Mazars USA asking for eight years of Trump's personal and business tax documents. This is connected to the DA's investigation of whether the hush money payments Trump's lawyer, Michael Cohen, allegedly paid to women who claimed they had affairs with Trump violated New York law. The president has denied having relationships with either Stormy Daniels or Karen McDougal, the women linked to the scandal.

Trump sued to prevent Mazars USA from giving Vance the information, but courts said the firm could be required to turn over records for a grand jury investigation. Trump's lawyers appealed, claiming that while in office, the president not only cannot be indicted, but he also cannot even be investigated.

If the Supreme Court agrees with that, "then the whole Mueller investigation and Watergate and the Clinton investigations were all unlawful because you can't investigate the president for criminal activity, even if it occurred before he became the president, while he's in office," Morrison says. "That would be a breathtaking argument to make."

In United States v. Nixon, the Supreme Court justices unanimously ruled that President Richard Nixon had to deliver records that had been subpoenaed by a federal district court. With that ruling, the Supreme Court set a precedent regarding executive privilege ("the right of the president and high-level executive branch officers to withhold information from Congress, the courts, and ultimately the public" because of national security and privacy reasons). The high court declared that the president had limited, not absolute, executive privilege, and that Nixon was required to turn over the subpoenaed materials.

That precedent is now being cited in this case. In a brief of opposition to the Supreme Court, counsel for the New York County District Attorney' Office wrote, "this Court has long recognized that a sitting president may be subject to a subpoena in a criminal proceeding." It later stated, "There is no logic in enforcing the Nixon subpoena but quashing this one."

"That would be a breathtaking argument to make."

Morrison says it is "hard for me to see how fair-minded individuals could come to a different conclusion," and adds that the DA is not just looking for Trump's personal records, but it is also seeking tax info regarding the Trump organization. "Whatever immunity the president has, the organization certainly does not have any immunity. It's not the president of the United States."

The other two cases have to do with subpoenas that came from Congress. Trump v. Mazars USA involves the House Oversight and Reform Committee's subpoena of the same accounting firm that the Manhattan DA subpoenaed, so that the panel can consider legislation regarding "financial disclosures, government contracts with federal officeholders, and government ethics."

Trump v. Deutsche Bank AG revolves around the House Financial Services and Intelligence Committees subpoenas for financial records of Trump, his business, and some family members. The committees want those documents for investigations into foreign influence in United States elections. Those records could potentially provide a lot of information about Trump's business dealings, including how he made his money and who he has partnered with, The New York Times reported. This could give Congress information about "potential leverage that foreign actors may have over [Trump], his family, and his business," the Intelligence Committee said.

These two cases are significantly different than Trump v. Vance, but are very similar to one another. At the crux of the legal matter is whether Congress needs the requested records for legislative purposes. Trump's lawyers have argued that the House committees are trying to conduct a criminal inquiry and accuse Trump of wrongdoing, instead of using the information for legislation as would be required for a subpoena.

Morrison disagrees with that argument. "Congress has a more than adequate basis for looking at that information to see whether the laws need to be changed to take into account potential presidential conflicts of interest."

The Supreme Court will hear the arguments in late March or early April, and is expected to issue its ruling in June. This means the cases likely won't have any effect on the potential impeachment and removal of Trump, but they could certainly play a huge role in the 2020 general election.

There could be more than one ruling, though. The Supreme Court could rule one way on the New York case and another way on the House cases, because the reasoning and arguments behind them are completely different. The question that the Supreme Court is ultimately answering is whether or not each subpoena is legitimate. "New York is clearly legitimate, and I think that Congress is clearly legitimate," Morrison says. But we'll have to wait until next summer to find out whether the justices agree.

More like this
Wow, Donald Trump is actually following through on a threat to sue someone
By Rafi Schwartz
Trump's brilliant 2022 strategy is for Republicans to get into a messy intra-party fight
By Rafi Schwartz
Insurrection enthusiast and acid trip 'Batman' villain Roger Stone got served court papers on live radio
By Rafi Schwartz
Stay up to date